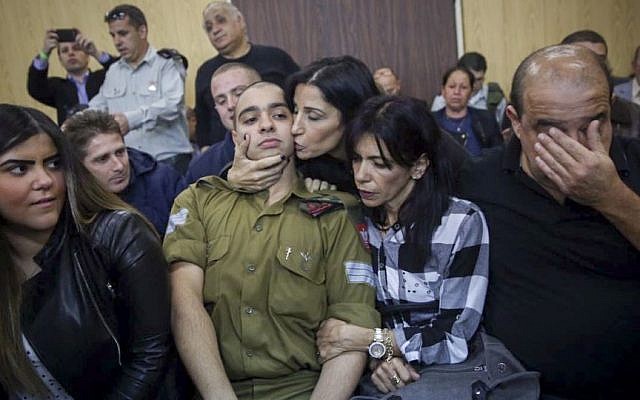 Elor Azaria, the Israeli soldier who shot a Palestinian terrorist in Hebron, in court room before the announcement of his verdict, January 4, 2017 (Miriam Alster/Flash90) 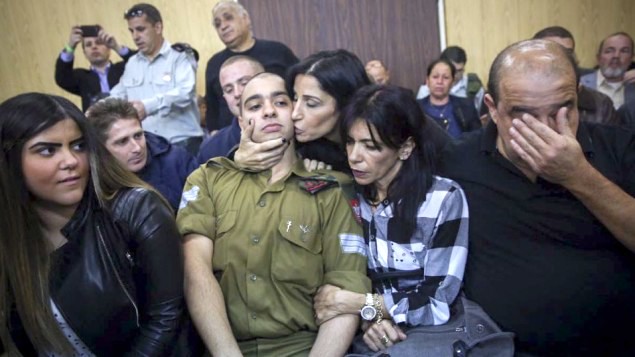 Elior Azaria arrives in court before announcement of his verdict, January 4, 2017 (Miriam Alster/Flash90)

The facts in the case have now been determined. Sgt. Elor Azaria has been found guilty of manslaughter. While the shooting was not premeditated, the court found him guilty of intentionally killing a wounded terrorist who no longer posed a threat to human life. In doing so, Sgt. Azaria violated Israeli military law and the moral foundations on which our Army stands.

The facts in the case have now been determined, and the noise has begun:

“Azaria is our son.”

“We don’t leave our soldiers behind.”

“Azaria may be guilty, but he deserves an immediate pardon.”

Azaria is indeed our son, a part of our family. Family membership, or for that matter citizenship in our society, is not contingent on one’s actions. We ask our children to defend us and send them into harm’s way. We are in their debt, and they remain our children, whether they are in the right or in the wrong.

Our children demand our love, loyalty, care, and compassion. But we are not required to morally acquiesce and accept everything that our children do. In fact, we are derelict in our duty as parents and family if we do so. Sgt. Azaria is our son, but he is a rebellious son, a son who broke the law and violated our moral code.

It is true that we do not leave soldiers behind. I remember in the first Lebanon War our frantic race to reach our fellow soldiers we thought were wounded and were going to be killed or taken captive. I remember our inability to fulfill this responsibility to the members of our unit who fell in the Battle of Sultan Yacoub. I remember the body of my brother-in-law, Aharon Katz, who our Army was unable to retrieve.

This is what we mean when we say we don’t leave our soldiers behind. To use this most basic axiom of Israeli society in the context of Sgt. Azaria is a desecration of all those who were wounded and died in valiant efforts to bring our fellow soldiers home. It is a form of emotional manipulation that is nothing short of sinful.

We send our children into the Army to fulfill some of the most difficult tasks imaginable. We challenge them in ways that no 18-year-old should be challenged. We do so, because we have no choice. An army, like civil society, is governed by laws and regulations meant to ensure soldiers’ safety and rights and clarify their responsibilities. Every day, soldiers break some of these laws and are tried and punished. Is every soldier in military prison today a soldier who was “left behind”? Do any of us posit that our family loyalty and debt to our children in the army must override the rule of law?

The most moral army in the world?

Why does Sgt. Azaria deserve an immediate pardon? The only grounds for a pardon is an argument that while he may be legally culpable, his actions were not morally flawed: He killed a terrorist who was willing to die as a shaheed in order to kill one of our children in the Army.

If this is indeed the argument, let’s stop the political posturing, emotional manipulation and competition over who truly loves our children, and debate the issue.

Do we want to put our children in an army that sanctions the killing of prisoners? Do we feel that our military code of ethics and the demand that we maintain the “purity of arms” serve our children, our army, and the interests of our country? Or do we believe these demands endanger and threaten them? Over and again, we declare that our army is the most moral army in the world. Is that a declaration we inherit by right, or a responsibility we must earn?

One of our greatest challenges is that our national rebirth has occurred in one of the most violent and morally challenged places on earth. We must learn to survive in the Middle East, but without becoming yet one more Middle Eastern phenomenon. Living by our moral principles, that all human life is sacred and can only be taken in an act of self-defense, is not merely our challenge, but our greatest strength.

Our children, whom we send to defend us, must be given the best training and equipment our resources can provide. But as a soldier, I knew that my greatest strength lay in my certainty in the justice of my cause and in the moral fortitude of my country and my army. It was with this certainty that I sent my children to the army. It was with this certainty that I knew — in the deepest sense — that my children would be OK. Because Sgt. Azaria and all the soldiers in our army are indeed our children, our greatest act of care and loyalty is to guarantee that they will serve in an army that truly aspires to be the most moral in the world.

In the rabbinic legal discourse, the rebellious son is punished now, because of what he might become. Sgt. Azaria must be held accountable, for if we pardon him, I fear what we may become: A society that has lost its moral compass, that has survived the dangers of the Middle East, only to become of the Middle East.

Sgt. Azaria has been found guilty, but he is also a victim. Our children, whom we send to protect us, must endure moral challenges often too great for their young shoulders to bear. He is a victim, because while our army is crystal clear on its rules of engagement and of the moral standards it demands of its soldiers, our civil society is not so clear. It has become acceptable for political, religious, and social leaders to advocate for actions and policies of revenge and retribution. Despite our immense power and success, fear has penetrated into the heart of our reality, and legitimized advocating for the abrogation of human rights.

Sgt. Azaria is guilty, but he is also a victim. It would be a great miscarriage of justice if the severity of his sentence reflected the enormity of the issue that his actions unleashed. Let the sentence reflect the fact that he is both guilty and a victim. Let us then go on from the debate around the fate of our rebellious son to a debate around the future of who we ought to become.

Rabbi Dr. Donniel Hartman is President of the Shalom Hartman Institute and author of Putting God Second: How to Save Religion from Itself. Donniel is the founder of some of the most extensive education, training and enrichment programs for scholars, educators, rabbis, and religious and lay leaders in Israel and North America. He is a prominent essayist, blogger and lecturer on issues of Israeli politics, policy, Judaism, and the Jewish community. He has a Ph.D. in Jewish philosophy from Hebrew University, an M.A in political philosophy from New York University, an M.A. in religion from Temple University, and Rabbinic ordination from the Shalom Hartman Institute.