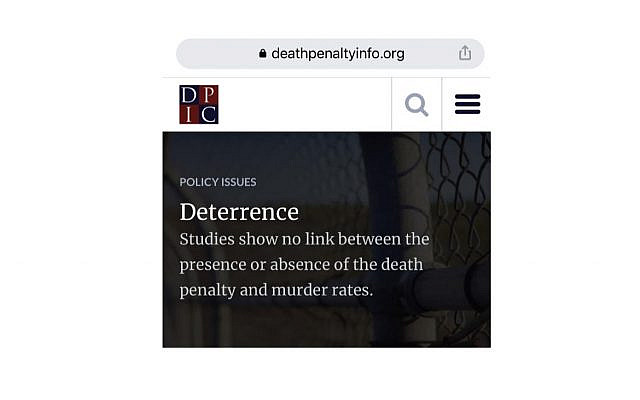 Purely as a practical matter, enshrining capital punishment beyond how it already exists in Israeli law is unnecessary and will be an enticement to more terrorism and murder. Just as we experience in the United States, the run-up to a ceremonial execution puts the spotlight on the killer, giving them a voice that would be dangerous when the motivation is terrorism. We are safer when terrorists simply disappear into prison. Acceptance of judicial executions as an Israeli norm is irresponsible and will cost innocent Israeli lives.

Beyond that, we write to remind you that civilized humanity agrees that capital punishment is an abomination. Just last week, the previous Israeli government was among a supermajority of 125 countries at the United Nations to vote YES on a resolution for a global moratorium on the death penalty. Indeed, 70% of the nations of the world recognize that the penalty of death is a slap in the face of the most fundamental human right of all – that of life itself. And yet, your government justifies this barbarism by maintaining that this punishment would serve to deter “the intensification of terror attacks aimed at harming Israel as a Jewish state,” and that it would meet “the need to notch a decisive victory against the attackers.”

The only “decisive victory” that this decision provides is for Malakh HaMavet, the Angel of Death. Unlike renowned Jewish abolitionists Elie Wiesel, Martin Buber and others, you have learned nothing from the state-sponsored murder that has been carried out against our ancestors throughout history. You have forgotten that Wiesel – the famed Holocaust Survivor and Nobel Laureate –  famously said of capital punishment: “Death is not the answer.” He also exclaimed this: “With every cell of my being and with every fiber of my memory I oppose the death penalty in all forms. I do not believe any civilized society should be at the service of death. I don’t think it’s human to become an agent of the angel of death.”

By opening the door to the Angel of Death, you invite the inevitable execution of the innocent. You are a military man, sir. Have you forgotten the fate of Israeli soldier Meir Tobianski, of blessed memory? Let us remind you. Meir Tobianski (1904-1948) was an officer in the Israel Defense Forces (IDF) who was executed as a traitor on circumstantial evidence on the orders of Isser Be’eri, the first director of the IDF’s intelligence branch. A year after the execution, Tobianski was exonerated of all charges. It was for this very reason that Chazal – our Jewish rabbinic sages of blessed memory – made execution so impossibly difficult to carry out in ancient Israel, and effectively legislated it out of existence in the Talmud, which forbids the execution of someone where there is any level of doubt about guilt or fairness. Arguably the most famous comment on the subject comes from one of our most renowned Jewish sages, the Rambam (Rabbi Moses ben Maimon). Maimonides (1135-1204), as he is often called, was a Sephardic Jewish philosopher who became one of the most prolific and influential Torah scholars of the Middle Ages. As the Rambam said: “It is better to acquit a thousand guilty persons than to put a single innocent one to death.” Rather than bringing back the death penalty, you should instead draft a bill in Meir Tobianski’s name to abolish it unequivocally from the state of Israel.

Looking elsewhere at our Jewish tradition, let us recall the words of some of the loftiest figures among them: Rabbi Eliezer ben Azariah, Rabbi Tarfon and Rabbi Akiva, as found in the Talmud, Mishnah, Makkot 7a:

“A Sanhedrin [Rabbinic court] that affects an execution once in seven years, is branded a destructive tribunal. Rabbi Eliezer ben Azariah says: once in 70 years. Rabbi Tarfon and Rabbi Akiva say: Were we members of a Sanhedrin, no person would ever be put to death. [Thereupon] Rabban Simeon ben Gamaliel remarked, they would also multiply shedders of blood in Israel!”

As this shows us, there were indeed dissenters among Chazal –  like Rabban Simeon ben Gamaliel above – who were pro-death, citing similar factors of deterrence and other now antiquated notions of “justice.” We can forgive sages like Rabban Gamaliel for their views, which reflected the understanding of their times about deterrence and the death penalty. Unlike them, however, you Mr. Prime Minister, are indeed privy to the scientifically proven fact that deterrence is a fallacy. Modern studies have demonstrated this time and again. The esteemed, neutral organization known as the Death Penalty Information Center outlines these in renowned meta-study. Moreover, you well know of the disastrous link between terrorism and martyrdom for Israel’s enemies. It is self-evident that most terrorists would consider the death penalty nothing less than a great kavod/honor. By reintroducing capital punishment for them, you not only are continuing the cycle of violence, but you are feeding the Angel of Death.

Last, but far from least, we ask you to consider what method you might use for this state-sponsored murder? We imagine it might be the most popular method here in the States: lethal injection. If so, let us remind you that this is a direct Nazi legacy. Lethal injection was first implemented on this planet by the Nazis as part of the Aktion T4 protocol to kill people deemed “unworthy of life,” as developed by Dr. Karl Brandt, personal physician of Adolf Hitler. Every time we use this so-called “Nazi needle,” we carry on their vision. The same holds for Zyklon B, the gas used in Auschwitz on our ancestors and now offered to kill people in Arizona, or for the gas chambers being erected in states throughout our land.  Which Nazi method will be your preference, Bibi?

We, the thousands of members of “L’chaim! Jews Against the Death Penalty” incontrovertibly condemn your government’s medieval decision to bring the Angel of Death back to Israel in the form of the death penalty. Our members come from across the world, and indeed many of us make Israel our home, like Karine Omry, a co-founder of the Death Row Soul Collective, which highlights the inherent humanity in all people, including those on Rows of Death. You can find opinions from many Jewish leaders who are death penalty abolitionists in Israel and elsewhere among the vast Jewish resources that Death Penalty Action has gathered here.

Please, Mr. Prime Minister, make “NEVER AGAIN” matter, and say NO to the death penalty in Israel. We beseech you instead to vote “L’chaim – to Life!”