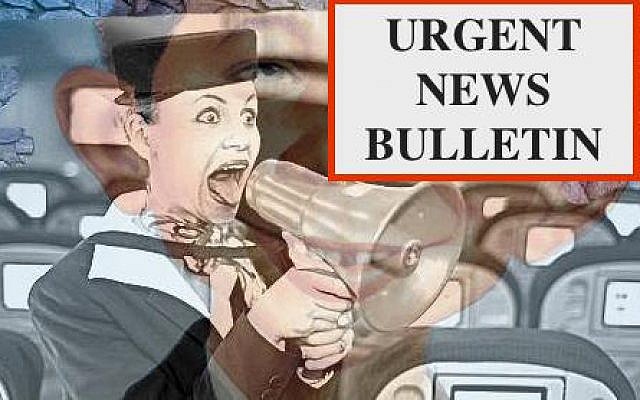 JICM News.  (S. Horenstein, chief editor). It can now be confirmed that Jerusalem resident Joe Blowstein has stubbed his toe. Because of his myopic vision, he failed to see the litter in the road, and he tripped. He has illusions of suing the authorities, but is in too much pain to move.  Toe stubbing is underestimated in the Middle East.  The awesome and terrifying re-occurrence of stubbed toes is on the rise. Even though the municipalities are cleaning the streets, people seem to be dazed from information overload, or focusing on their huge bank minuses, hence leading everyone to chronically stub their toes. The Prime Minister has issued an ordinance to the Ministry of Health, that anyone having more than two stubbed toes in one month, is NOT entitled compensation from the Health Funds, no matter what enhanced health plan they are on.  In case of war (highly unlikely), the Prime Minister has announced that this new restriction will be lifted, as it is known that soldiers, as well as other important sectors of our defense establishment, must work in the night time hours without light, and if THEY should stub their toes in inordinate fashion, surely they will be compensated.  (Meanwhile local citizens’ rights groups have shown outrage at such new items; they claim that the government’s reactions are a smokescreen from other pressing and urgent issues).   In other news, the following items have yet to be fully confirmed:

Other breaking news items via the official government press office:

One final item. Our “true scoop” news bureau is currently investigating new information regarding the 2003 devaluation of Histadrut pension funds (now called Miftahim “Vatikim”), including all funds of teachers working in public schools. This action, in the name of sound economics, left hundreds of thousands of workers, perhaps more, with 30% to 70% reduction of their retirement funds. Many loyal workers who are NOW retiring are facing dire poverty.  Their pensions are a pittance of what was originally promised. The original agreement to implement such a pension devaluation was “orchestrated” by then Finance Minister Benjamin Netanyahu and then Histadrut Chairman Amir Peretz. With the current focus of authorities around special deals (whether numbered case 1000, 2000 or 4000), there is new renewed interest in the “grand-daddy of them all”, this gross pension devaluation.  More on this breaking news later!