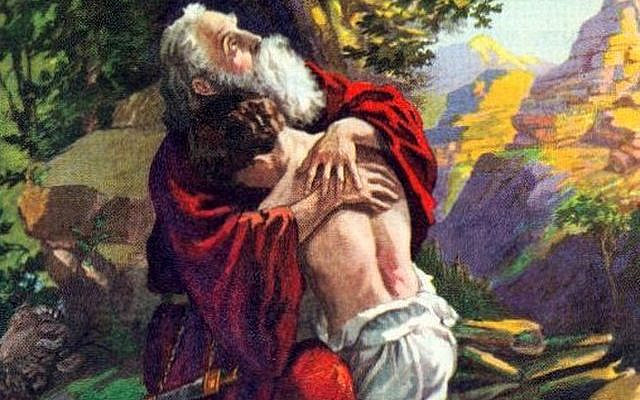 A question that bothers me is how the children in some families seem to follow in the steps of their parents and in other families the children go in separate directions. Why are some children more exacting in their ritual observance and their sibling are much more lacks? I will tell you that I not only don’t know the answer, but I don’t even know how to make sense of my speculations toward answering the questions. A firstborn child is the experiment of the parents.  They try all sorts of behaviors on the child in the hope that the child will follow the tradition and grow into an independent human being.  They send him/her to the best educational institutions and try to set good examples at home.  Parents struggle to balance child care, work, family responsibilities, and spousal relationships.

The Torah tells us the story of three families with two sons each.  One son was loyal to the ways of the parents and the other went off-the-derech.  They are the sons of Adam, Abraham, and Yitzhak.  Adam’s sons were not really our ancestors.  Abraham’s son Ishmael and Yitzhak’s son Esau are not ancestors of the Jewish people.  Both fathers loved their sons.  In this week’s portion, Toldot, we learn that Yitzhak loved Esau and Rivke had a preference toward Ya’akov.  Didn’t Yitzhak know that the elder son was a man of mercurial temperament who lived in the emotions of the moment. Even if this did not trouble him, the next episode involving Esau clearly did:

“When Esau was forty years old, he married Judith, daughter of Beeri the Hittite, and also Basemath, daughter of Elon the Hittite. They [the daughters-in-law] were a source of grief to Isaac and Rebecca.” Gen. 26:34-35

Esau left his family and made his home with the Hittites similar to his uncle Ishmael who left the family. Clearly Esau was not the one to carry forward the covenant made with his grandfather Avraham.  Avraham in his choice of Rivka to be Yitzhak’s wife wanted the family to distance themselves from culture, religion, and morality of the local Canaanites and Hittites.

Yitzhak clearly loves his son, Esau. But much is unsaid in the Torah. In Genesis 27:7 when he asks his son to prepare favorite foods a deep sense of love is evidenced in the language and behavior.  Why did Yitzhak love his son when Esau betrayed him in his beliefs and actions? Yitzhak knew that Ishmael was sent away.  He knew of the trial when he was bound on the altar. We don’t know the nature of his psychological damage. Yitzhak knew this and didn’t want Esau to be a sacrifice.  Despite all of his disappointments with the route of the son’s life. Perhaps the father-son  (Yitzhak-Esau) relationship was a repair in the rupture brought upon him by the binding? Perhaps Yitzhak believed in the hope that Esau would return to fold as Elisha ben Abuya  (Yerushalmi Haggigah  2:1 “A student of the sages who forgot his learning can learn anew.” )

Perhaps Yitzhak is giving us hope?  His behavior is unconditional love. We sometimes wrestle with our parental relationships.  One never leaves his role even if one is age 70 or 90. The relationships between parent and child; teacher and student; mentor and mentee are sometimes tense, conflictual, even painful, but may also be full of love, pride, and honor.  It is the totality and depth of the relationship that is unbreakable. Perhaps Yitzkak and Rivke did a great job with their family because Ya’akov had many children and was the father of the twelve tribes that became Am Yisrael?

The business lesson is that the business needs more than one kind of person to thrive.  One should not give up hope if an employee marries a Hittite.  WRONG!  Businesses are not families.  A manager can choose employees; one can’t choose family. An organization needs teamwork. Unconditional love is not part of the business relationships. We can learn from Yitzhak and Elisha ben Abuya that relationships can be repaired.