I’ve shared many shocking things on social media — from female politicians being pixelated by Haredi media outlets, to girls replaced with dolls next to images of real boys, to pamphlets blaming women’s wig and skirt lengths for COVID-19 and other natural disasters… 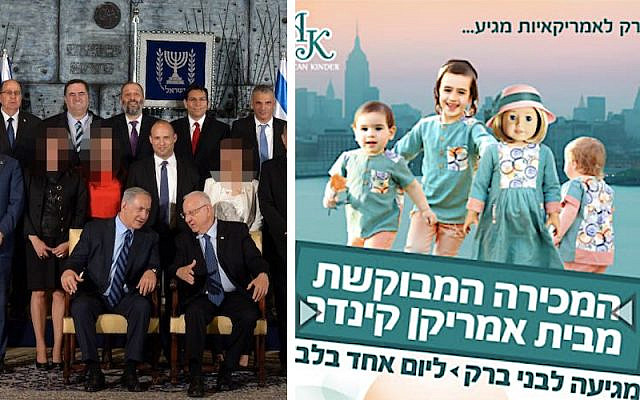 Screenshots of images showing the faces of female government coalition members pixelated, and the face of a girl in a clothing ad replaced with a doll’s head.

But none has gotten such immediate and intense reactions as those elicited by the “fake toe” ad (above).

When I posted it, I did not know whether it was real or not. I have seen so much insanity and fake “tznius” (modesty) ads and declarations that, honestly, it could have gone either way.

The reactions poured in.

Outrage, shock, and mostly people begging me to reassure them that it was fake.

But I couldn’t! Until a good friend put me out of my misery and let me know that it was satire — and that she knew who had created it.

Wanting others not to suffer from the possibility that the ad was real, I posted on social media — on the various pages of the organization I cofounded to combat exactly this kind of thing when it’s real, Chochmat Nashim, and my own accounts as well, that it was satire.

Many people did not believe me, and they were justified in doubting, because the people who created the ad were so committed to it that they had included a phone number in the ad, and answered calls that continued the conversation as though the ad were real.

Now it is time to set the record straight, and I’m here to help them do so.

The people who made the ad want to keep their identities private, and, as much as I’m all about women having a voice and showing themselves in images, I believe that their message is important enough that I’m helping them spread the word (I promise, it’s not me behind the scenes. I’m just not that creative — and I have no poker face. And besides, if I’d done it, I’d be thrilled to let you know I pulled it off!)

What follows is their explanation.

Poe’s law is an adage of internet culture which dictates that without a clear indicator of the author’s intent, every parody of extreme views can be mistaken by some readers for a sincere expression of the views being parodied. The scary thing is that, due to the race to be “frummer” (more thorough or dedicated in religious practice) than the next, we are existing in a place that is shadier than the shadiest shade of gray.

How many times have you seen something posted online or shared in WhatsApp group chats and wondered how it can possibly be real?

Over the years, the Orthodox world has enjoyed a good laugh or exclaimed in horror at some of the chumras (stringencies) that get passed around on the frum social media circuit.

One entrepreneur sold containers of salt-water on Passover eve, followed the next month by the myriad of posts about shlissel (key) challah — which is intended a segula (remedy or protection) for financial security. A poem exhorted women and girls not to wear a crossbody bag, as it defined “certain body parts.” 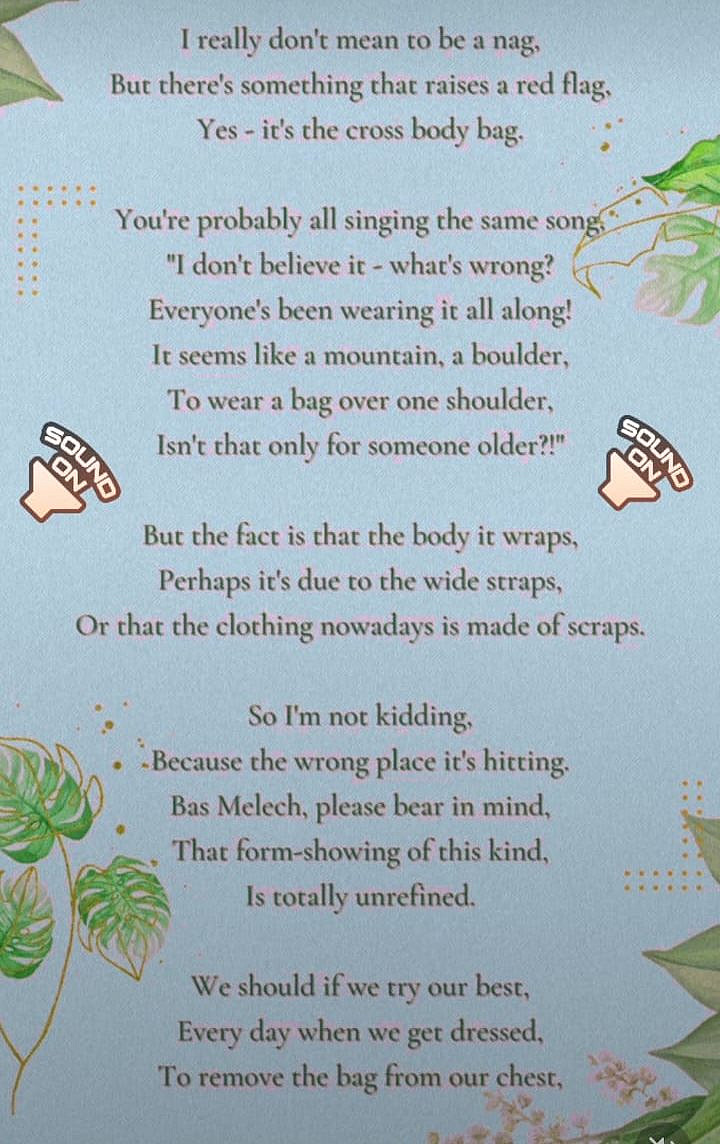 A while back, we came across an ad for sewing the bottom of one’s nightgowns to prevent one’s feet from the immodesty (we note, tongue in cheek) of being visible, inadvertently, while asleep. 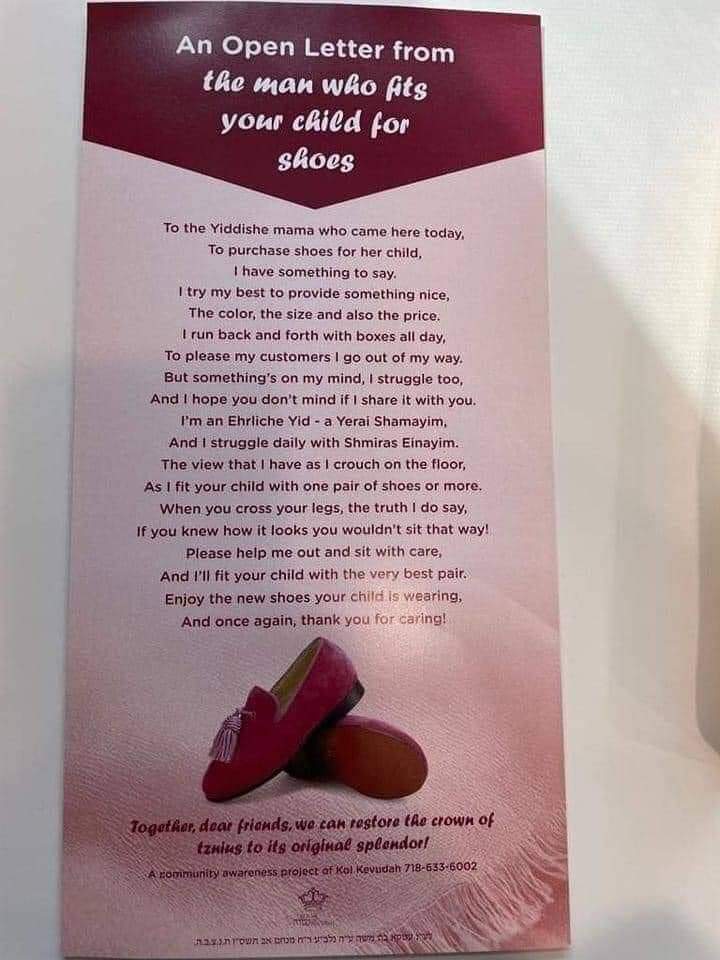 And this open letter to mothers who bring their children to buy shoes… asking them to sit properly. (courtesy)

Moreover, few could be oblivious these days to the diminished presence of images of women in print publications, the most egregious example of which might be the horrific pixilation of female relief workers who were caring for Holocaust victims. And everyone in the Orthodox world is aware of the ever-present plethora of outcries blaming each new trend in women’s attire and behavior — that is, women’s “tznius,” modesty, or rather, lack thereof — for every natural and man-made catastrophe. 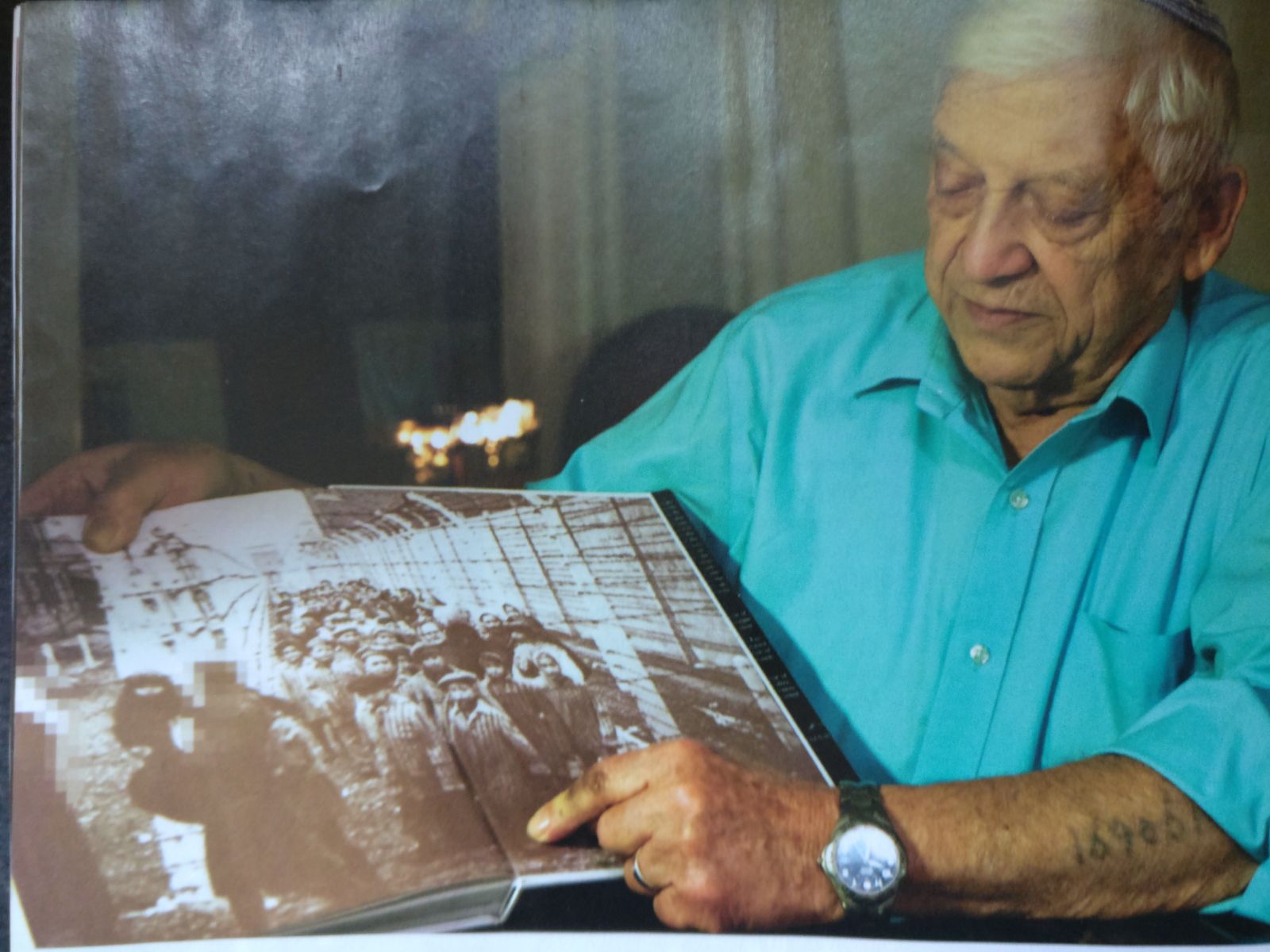 Mishpacha pixelating an image of the liberation of Auschwitz. (Facebook)

We are two frum, professional women with a propensity to rely on humor and a dash of sarcasm to help us process these strange times in which we find ourselves. We care passionately about our communities, our faith, and the future of our children. And so our brainchild, the “prosthetic toes for open toes [sic] shoes,” came to the market.

Our pseudo-ad was the comical flip side of a serious coin — we took the concerns of hyper-tznius and extended them to an arena that should have been obviously nonsensical, but in the current milieu was ambiguous — possibly real. We also used our ad as a tacit expression of our simmering frustration at the hijacking of a beautiful mitzvah — which tznius in its ideal form really is — by a pervasive group of nut-jobs, who have harnessed extremist practices to fear as if it is the fear of God, and perverted the practice of modesty.

Naturally, we had no idea that our ad would go viral, but we are glad to be able to extend the reach of our message: that all of this has gone too far.

Initially, we sent the ad to a total of eight people via text. The ad was reposted in WhatsApp chats, appeared on Facebook groups, commented on in Instagram stories, re-tweeted on Twitter, and eventually even covered by Jewish news outlets.

Within the first days of that first text, we received more than 1,000 phone calls. A week later, we are still receiving calls.

Most folks who called were wondering the same thing: Is this ad real?!

That is, are there really people who think that Orthodox Jewish women who are serious about modesty should ideally be covering their toes — with synthetic toes??

But what if it is?

So many people were not sure that we knew we’d hit a nerve. We decided to take it to the next level: we answered a few of the calls to the phone number on the ad to put our question to the test. How far can we push until people realize this is not real?

We were shocked to discover that providing additional bizarre details — specifically, asking the caller to choose Sephardic or Ashkenazic skin tones, nail polish colors named after schools, and other admittedly nutty stuff– convinced many callers that the ad was serious. We had taken our spoof “ad absurdum,” and it wasn’t “too far gone” for the current environment. Too many people remained, at best, confused.

The fact that no matter how far we went, no matter how absurd the terms we outlined, so many callers remained unsure whether the ad was real demonstrated just how pervasive the phenomenon of pushing to the extreme is when it comes to all manner of modest attire for women and girls. Indeed, that is exactly what has happened of late, given the absurd stringencies that have emerged in recent years. People who start out puzzled and disturbed soon quietly accept the draconian and increasingly ridiculous rules that are newly stipulated on a regular basis from frum (religious) society, when it comes to modesty. And this is the approach that has been slowly accepted and reluctantly tolerated in the frum education system. That is the nerve that we hit with this ad.

We are still digesting the implications of our little social science experiment. Here are a few of our preliminary thoughts:

We hope you enjoyed a good laugh. We know we did. But what started out funny quickly became a powerful and sobering example of society that is so far gone that a parody of its foibles does not quite do its intended task. Satire works best when it is clear to all that it is social commentary. In this case, we must hope that those who thought the synthetic toes might be the next real modesty requirement can internalize what it says about our society — and them personally! — that they were taken in. And with that, perhaps, we can begin a reforming healing process.

About the Author
Shoshanna Keats Jaskoll is a writer and an activist. Cofounder of chochmatnashim.org She loves her people enough to call out the nonsense. See her work at skjaskoll.com
Related Topics
Related Posts