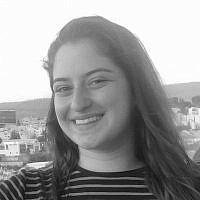 The Blogs
Remi Jungreis
Apply for a Blog
Advertisement
Please note that the posts on The Blogs are contributed by third parties. The opinions, facts and any media content in them are presented solely by the authors, and neither The Times of Israel nor its partners assume any responsibility for them. Please contact us in case of abuse. In case of abuse,
Report this post. 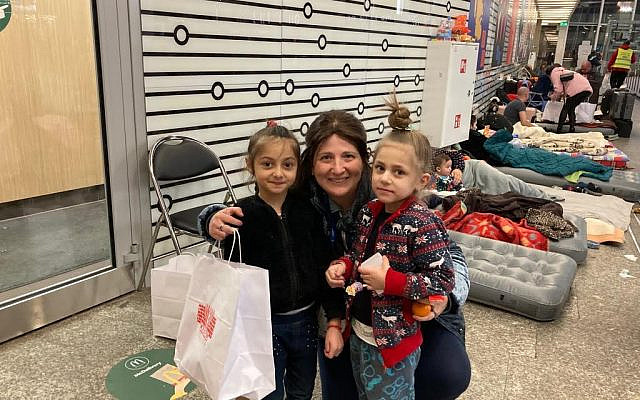 Explore our past and be inspired to shape our future,” promised the “Living Link” program offered by Chabad on Campus.

For an American college student living in comfort, prosperity, and the shelter of enlightened modernity, I found the planned itinerary on this 50-strong Poland-trip a vital experience of the history of our people.

Necessary, maybe, but system shocking. Numbing. Tear jerking. Inner-rage inducing. Depressing. And, strangely enough, motivating—in the need for us students to rejuvenate, replicate, and compensate for this horrific loss of Jewish life and living. In other words, inspiration indeed, where I least expected it.

But what happened afterwards—the spontaneous off-itinerary interactions that were unique to this year—is what really blew me away, and entrenched my desire to live a stronger, more conscious Jewish life.

The refugees from Ukraine.

We first encountered them in the dozens, if not in the hundreds, at the Warsaw train station—women, children, senior citizens—lying on small cots some even on the floor, with barely half a suitcase in which they were able to stuff whatever they could of their entire lifetime’s-worth of possessions. The worry in their eyes was palpable: Where will they be tomorrow? Will their husbands and fathers, sons and brothers who stayed behind for the draft, survive the war?

Momentarily paralyzed, we just stood there, looking. But one of the main leaders of the trip, Rebbetzin Yehudis Bluming of Chabad at Duke /UNC , didn’t hesitate a moment. She immediately began to go from person to person, Jew and overwhelmingly non-Jew, offering a kind word, asking how we could help, and bringing warmth and happiness to each face.

Inspired by her simple humanity and lack of inhibition to embrace these total strangers, we followed suit. With the help of the Chabad interpreter, students with Slavic language background, and Google translate, we spoke, we smiled, and most of all we listened. After speaking to a few people, it became clear that the refugees were lacking some of the barest necessities.

All the tension that had built up from seeing the destruction of the Holocaust, alongside the helplessness and despair of the devastation that had left us emotionally depleted, now came crashing down in full force, the energy converted into a tidal wave of goodness.

On the spot, a student set up a Facebook donation site for these refugees. A donor who had joined on the trip pledged to triple-match all that was raised by that night. Students collected and coaxed help from any contact they could think of. In just a few short hours, we miraculously raised close to $30,000.

Guided by the Rebbetzin, who as a mother of 8 children intuited what we should get besides what had been asked for, we went to the store and bought bags and bags of food, personal hygiene products, and even toys for the kids.

As we were distributing the items, we met a family that had escaped with seven children. The father—who was allowed to leave Ukraine only after his wife’s intense efforts and pleading with the authorities—shared that Berlin was their hoped-for destination. When the Rebbetzin asked him how he planned to get there without tickets, he said simply: “G-d got us till here. He’ll make sure to take us forward somehow.”

Instinctively, we put our hands in our pockets and took out what we had. It was a deeply emotional moment for all of us when we saw that the money we had pooled was enough to secure tickets for the whole family on the train out early next morning.

“You’ve confirmed to me that G-d is with us and guiding our journey,” said the father.

His words couldn’t have been more apropos. I might have said them myself if I was speaking for the whole group. The timing of this encounter truly felt Divinely orchestrated. It allowed us to see and experience, as modeled by the Lubavitcher Rebbe and his representatives, that the proper Jewish response to intense devastation and hate is not dejection or revenge, but courageous acts of goodness, in a soft but powerful embrace and love of humanity in a real way.

The entire encounter made me proud to be a Jew and be associated with Judaism. Somehow, I sensed that both the rebbetzin’s and the rabbi’s dedication to others was not despite their more narrow-looking religious observance and dedication, but precisely because of it. This non-Jewish Ukrainian father’s faith in G-d helped me see the reflection of it in my own backyard—somehow the heightened awareness of G-d that the rabbi and rebbetzin exemplify in their lives began to seem more normal; somehow, I began to see that the sensitivity and generosity of spirit that they displayed didn’t grow in a vacuum, but was perhaps nurtured by their life of Judaism in a conscious, active, human way.

We watched in shock as the rebbetzin walked right over to the kids and lifted them up as if they were her own.  She taught them how to play bubbles. She blew up balloons for them. With our help, she gave crayons and coloring books to each of them.

One mother was crying as she watched her children play carefree. “I haven’t seen them smile in weeks,” she said. “And you’re the first person to give me hope, and treat me in a dignified manner, with trust in me as a normal person, with abilities like anyone else.” She seemed truly disappointed when we had to leave the hotel for a day trip.

Like we saw again in Krakow. Krakow was on the planned itinerary for its beautiful synagogues and other sites. But of course, when we got there, we gravitated toward the refugees, seeing how we could be of assistance. It turns out that Chabad of Krakow had organized a fair amount of apartments for the refugees, a huge undertaking and expense. But the apartments were still somewhat bare. Again, we approached the people.  “What would you need for you to make it feel like home?”

Rebbetzin Yehudis took out photos of her children. There was that special connection that crossed all borders: women to women, religion to religion, culture to culture. Crying together over the random bombardment of buildings with children inside and the fears of never seeing their husbands again.

We went to buy pots and pans and clothes. Most of us a bit clueless about what a seven-year-old would enjoy wearing, or what type of slippers might fit the fancy of an overwrought, immigrant mother looking to relax. That day, the largest mall in Krakow was overrun by American college students, pumped with positive adrenalin and mitzvah energy. While our gift-choices might not have been perfect, their utility was greatly appreciated by the recipients and the accompanying spirit of love and care filled in the rest.

When I went to one of the rooms and knocked on the door, a mother of 4 answered the door, her smile lit up the room as she opened the bag, she saw much needed supplies that we got at the mall and began to cry. Taking out all the items and putting them on the bed. The little girl in the room saw a math book on the bed and began to look intently and smile. Never have I seen a little kid smile seeing math but that just goes to show how much a little act of kindness can do for a person.

“Eye-opening and life-changing,” the Living Link’s marketing had promised.

I couldn’t have said it better myself.

About the Author
My name is Remi Jungreis, I am a junior at the University of Maryland studying Family Science. I am quite active on my campus with my sorority AEPhi and helping out with the Jewish community. I enjoy going to athletic events so much so that I recently started working there. All in all I'm a pretty down to earth girl who likes to hang with her friends and family.
Related Topics
Related Posts
Comments