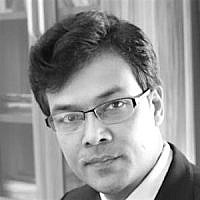 The Blogs
Tahir Imin
Apply for a Blog
Please note that the posts on The Blogs are contributed by third parties. The opinions, facts and any media content in them are presented solely by the authors, and neither The Times of Israel nor its partners assume any responsibility for them. Please contact us in case of abuse. In case of abuse,
Report this post.

US President Donald Trump left, reacts to a reporter’s question ahead of a meeting with Prime Minister Benjamin Benjamin Netanyahu, right, at the King David Hotel in Jerusalem on May 22, 2017. (AFP/MANDEL NGAN)

These past two days, I witnessed a historical moment: Arab/Islamic-US summit as well as the meeting of US president Donald Trump with Israeli and Palestinian leaders here in Israel.

As far as I am concerned the US president does not understand the issues very clearly and he does not have any feasible plan for a solution which can be seen from his remarks: ”I’ve heard it’s one of the toughest deals of all.”

As for his position and personality, President Trump wants to be a great dealmaker and make a history by cutting through the difficulties which defeated others.

During his campaign, he promised to move the US embassy to Jerusalem.

But he avoided this topic in his two-day visit the Holy land.

According to sources, Israel and the Palestinians have not held direct talks for more than three years.

On Monday, Mr. Trump stressed the strong bonds between the US and Israel while Israel prime minister continuously and emotionally expressed his gratitude for the US’s support of Israel and the unshakeable bonds between the peoples and governments of two sides.

As the world watched every detail of the Trump’s first overseas and middle east trip, he speaks so cautiously about sensitive and main issues as the two-state solution and tried to unite all parts of Arab-Islam sphere and the middle east to focus on Terrorism, a  comfortable and safe topic for the interests of all sides.

The critical and main issues have not been addressed in the meetings which Israelis and Palestinians are way apart on the property ownership of East Jerusalem, the fate of Palestinian refugees and the borders of an independent Palestine.

One of the main issues laid out is The two sets of leaders also do not trust each other meanwhile there is not balance between the tow sides As Israel prime minister Benjamin Netanyahu enjoys the domestic support  and international admire ,his Palestinian counterpart Mahmoud Abbas facing most big challenges from his domestic rival ,Hamas which Donald trump described as Terror group.

In the eyes of some Palestinians, he lost his legitimacy of representing for the people as they are deeply divided, with Fatah in charge in the West Bank and In Gaza the Islamists of Hamas, who have been labeled by Trump in his recent speeches as terrorists.

While many observers are skeptical about whether the US can be a fair broker, Trump’s visit overwhelmingly tends to Israel, spending more time with Israel leaders and giving promises to stand with Israelis.

Ahmad, a muslin driver in Jerusalem said that: we need the US support more than Israel because if the situation continues, Israel has nothing to lose .but we lose everything: land, people, and patience.

In his first middle east trip, there is no peace deal in Trump’s pocket but only business  with Saudi which helps him political and economic achievements

Without specific plan or achievement, Trump takes it as an opportunity to learn the middle east issues and watch more exactly and understand it deeply.

The world tired of the middle east crisis which has been shadowing the other humanitarian crisis in different parts of the world which wait in line after middle east, with as much important as the rights of the people here.

Without one voice united, the Palestinians could not be ready to negotiate with Israel.

Trump needs some time to learn the bottom of the situation and history of the problem and listen to his advisors as well as the leaders and peoples of two sides. It’s not the issue of one powerful leader or a strong country! All the voices should matter!

The Author is an Uighur student from China at Haifa University.

About the Author
Tahir Imin, Uighur, a former prisoner of conscious from So-called Xinjiang,A China occupied Uighur State.He studied at Xinjiang University in Urumqi and worked as a researcher, entrepreneur, and public leader. He is the initiator of Uighur International Doppa Cultural Festival.(Since 2009) He started regional public lecture forum to promote education among the general public.(since 2011-) He has also planned and sponsored to promote education among Uighur women.(since 2012-) He was famous for his organizing Uighur youth development movement under the name of Ottuz Oghul and Nine Qiz (30 gentlemen and Nine women) He has published two books about social topics and wrote many articles on Uighur websites. He has studied Hebrew and Jewish Culture at Haifa University and studies International Relations in the US.
Related Topics
Related Posts
Comments