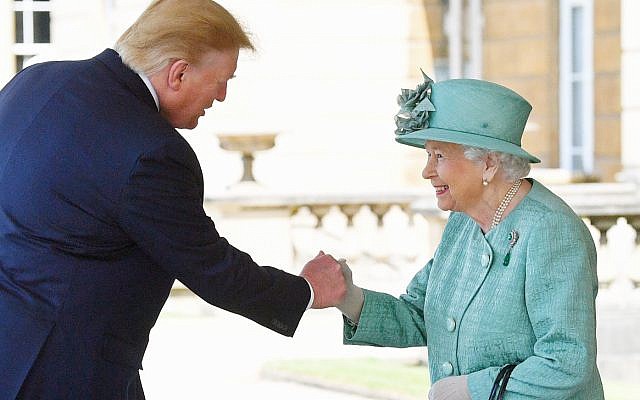 Queen Elizabeth II greets US President Donald Trump as he arrives for the Ceremonial Welcome at Buckingham Palace, London, on day one of his three day state visit to the UK. (Photo credit: Victoria Jones/PA Wire via Jewish News)

Hakarat hatov obliges us in all our personal relationships  and daily affairs. Some might say that gratitude is merely common decency, which contributes to harmony within society and speaks for itself. True though that is, the considerable attention this trait receives in rabbinic teaching is testimony to the tendency people have to overlook it and take the friendship and kind deeds of others for granted.

There were remarkable cases of non-Jews in Germany and Nazi-occupied countries who risked their freedom and even their lives  to protect Jews during the Holocaust. Some were private people , who hid Jewish friends and neighbours when they were being rounded up for deportation. Others were public officials , such as Raoul Wallenberg  and  Chiune Sugihara, who  bravely devised mechanisms to enable Jews to escape to safety  across borders.  Such individuals were rightly honoured as heroes after the Second World War and publicly acclaimed at Yad Vashem and elsewhere as “righteous gentiles”. What could warrant greater hakorat  hatov than saving Jewish lives?

We live in a world of increasing  uncertainty and foreboding.  Although there are currently no countries where Jews are officially being persecuted, antisemitism within societies themselves is rapidly on the rise, as we constantly see.  So  on the infrequent occasions that non-Jewish politicians really go out of their way to oppose antisemitism, to  stand up for Jewish needs or support Israel,  hakorat hatov is called for.

Theresa  May is one such person. Although she will hardly go down in history as a successful leader, she ought to be saluted wherever possible by the Jewish community as one of the most steadfast friends our community has ever had
at No 10.

Her personal solid support for Israel, for legislation against the boycott, divestment and sanctions movement, widening the definition of antisemitism, funding Jewish security, Holocaust education and a host of other pro-Jewish measures, have been  second to none. The only criticism would be  in the field of faith schools, which are under pressure to teach  relationship subjects that are religiously forbidden,  but it could be that the Department of Education is outside the prime minister’s practical control.

Head and shoulders above all, in my book,
is Donald Trump. Personality-wise, he may not be everyone’s avuncular photo pin-up. However, as an American president, he has so far proven to be a statesman of huge determination and courage, and  for the Jewish world a political angel. He has put the security of and alliance with the state of Israel  at the top of his agenda, recognising more than any predecessor the state’s crucial role  as a bastion of Western democracy.

Trump has valiantly combatted Islamic terrorism and the brutality prevalent within the Arab world, and single-mindedly refused to appease the world’s most dangerous regime – Iran. He has officially recognised Jerusalem as Israel’s capital and the annexation of the Golan. He alone freed Sholom Rubashkin from an unjust term of imprisonment. Most of these were the fulfilment of pre-election promises, demonstrating  – untypically for politicians – that he is a man of his word.

It sickens me beyond expression that despite Trump’s outstanding track record, no doubt encouraged  by his Jewish son-in-law and now-Jewish daughter, there are so many Jews who continue to  participate in  the liberal-lefty chorus  condemning him as racist and Islamophobic. He is neither.

I write these words on the eve of  Trump’s  visit to the UK. One can only hope British Jews will be prominent among those welcoming the president in a spirit of trans-Atlantic hakarat hatov, rather than joining with our detractors and kicking him in the teeth.