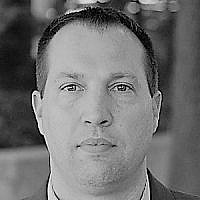 The Blogs
David Grantham
Apply for a Blog
Please note that the posts on The Blogs are contributed by third parties. The opinions, facts and any media content in them are presented solely by the authors, and neither The Times of Israel nor its partners assume any responsibility for them. Please contact us in case of abuse. In case of abuse,
Report this post.

*The Trump administration’s 2018 budget calls for a 32 percent reduction (or roughly $19 billion) in America’s generous foreign aid by slashing funding for programs not authorized by legislation or those which have not sufficiently demonstrated a “positive impact.” Yet, the same budget increases funding for the Palestinian Authority (PA), despite the PA’s routine use of U.S. taxpayer money to reward terror. A monthly stipend that awaits the Palestinian terrorist who recently murdered three Israeli citizens during their Shabbat dinner contradicts the Trump administration’s litmus test for foreign aid distribution. That must change.

Social and economic conditions have deteriorated for the Palestinian people since the Oslo Accords consolidated disparate Palestinian groups into the PA in 1994. Today, some 65 percent of Palestinian refugees live in poverty, while infant mortality and unemployment rates continually register at 20 percent or higher.  This is despite the fact the PA has received over $31 billion from the international community since 1994.

Accounting for historic currency inflation, this amount is over 15 times more per capita than the money the United States provided Europe under the Marshall plan for the complete reconstruction of Europe after World War II.  In other words, the money donated to the Palestinian Authority could have rebuilt Europe’s economy 15 times.

The PA has been doling out millions in aid to Palestinians imprisoned in Israel after they carried out violent crimes.  In 2013, the PA spent an estimated 5 percent of its budget on payments to terrorists, and spent approximately $100 million toward prisoners’ salaries.  A sliding scale based on time served determines their rate of pay.  For instance, a terrorist sentenced to 30 years or more receives approximately $3,400 per month. Terrorists’ wives and children also receive compensation. And in 2014, the PA announced a budget increase of $46 million to pay released prisoners.

Meanwhile, an estimated $4 million to $6 million is funneled to a university scholarship fund for relatives of those who killed or attempted to kill Israelis.  All of this is financed through international aid. And American aid accounts for an alarming portion of this money.

The U.S. government does not recognize Palestine as a state, and therefore, distributes taxpayer funding to the PA through its departments and international bodies rather than direct government-to-government assistance, making it more difficult to track.

The U.S. Agency for International Development (USAID) is the primary federal agency administering civilian foreign aid, providing the majority of money sent to the PA, or roughly $205 million in 2017.  The Trump budget increases that amount by $10 million.

The United Nations Relief and Works Agency for Palestine Refugees (UNRWA) is a separate funding channel to the Palestinians.  The United States is the single largest donor to UNRWA, paying approximately $380 million toward a nearly $1 billion budget in 2015.  The U.S. contributed $355 million to the organization in 2016, $95 million of which was earmarked for the West Bank and Gaza.

It is unconscionable that conditions have only worsened for the Palestinian people despite billions in financial support.  But such will continue to be the case so long as PA leadership uses aid to underwrite terrorism, rather than build infrastructure, improve education and enhance health care.  American taxpayer money has been routinely rerouted to finance terror and the PA must be held accountable.

Ideally, Congress would modify the administration’s budget by decreasing the amount of funding slated for the PA under both USAID and UNRWA. Defunding the latter altogether would eliminate the organization responsible for perpetuating Palestinian suffering by preserving their refugee status throughout the Middle East.

But it is the Taylor Force Act that provides perhaps the most useful vehicle for change. This proposed legislation would require the PA to end the sponsorship of violence against Israeli citizens and revoke any laws that allow for the terrorist compensation, as well as publicly condemn said acts, as conditions for receiving future American funds.

The Taylor Force Act also requires the PA to terminate payments to individuals fairly imprisoned for terrorism and to the family members of those who died in acts of terrorism against American and Israeli citizens. The latest version of the act, approved by the Senate Foreign Relations Committee on August 3, contains additional language calling on other donor countries to “cease direct budgetary support until the Palestinian Authority stops all payments incentivizing terror.” The Secretary of State would be responsible for publishing reports that confirm cash was used for its intended purpose.

The Trump administration’s proposed budget allows the PA leadership to keep exploiting the Palestinian people by using social and economic assistance funds to encourage violence against Israel and its allies. The U.S. government must take a stand and ensure taxpayer money does not end up in the PA’s “martyr fund.” The Taylor Force Act could help do that.

About the Author
David A. Grantham, Ph.D., is a leading expert in national security matters and international affairs. Dr. Grantham’s expertise engages the nation’s most pressing issues, like terrorism, international security and military affairs. Dr. Grantham served as an officer in the United States Air Force and as a Special Agent with the Air Force Office of Special Investigations (AFOSI) and holds a PhD in Modern History from Texas Christian University.
Related Topics
Related Posts
Comments