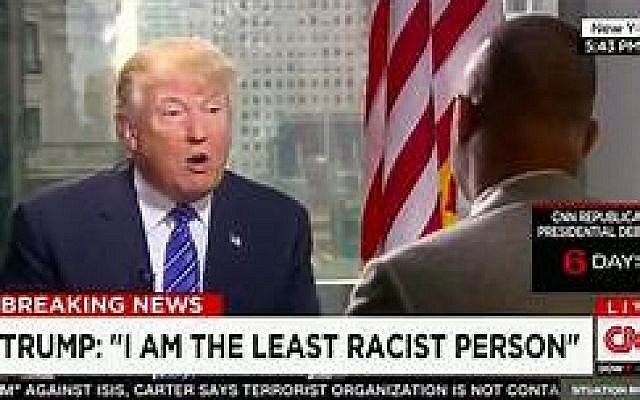 World-famously by now, Trump is America’s liar in chief. He needs to lie, cheat, con and steal, or he hasn’t had a good day. Each to his own.

Yet, when it comes to Racism, he just can’t lie.

We all remember how he condemned the Neo-Nazi march of a year ago and then just had to add: There were actually very fine people on both sides, on both sides. He couldn’t just absolutely condemn them.

And now, a year later, at the commemoration of that infamous march he did it again. He tweeted: “I condemn all types of racism and acts of violence. Peace to ALL Americans!”

The riots in Charlottesville a year ago resulted in senseless death and division. We must come together as a nation. I condemn all types of racism and acts of violence. Peace to ALL Americans!

He wants peace for “ALL Americans” though for some that would be: no Blacks around. He wants unity, though for him that only comes by keeping non-Norwegians (Norwegian is his code for: very white people – never mind that many Norwegians are not White) immigrants out.

He just couldn’t univocally condemn racism. The man who can say one thing and in one breath say the opposite, he couldn’t do it?  Why? He knows how to lie better than any US politician. What bothers him here, stops him from just pretending he’s against racism, from being presidential?

He can rob the “forgotten Man of America no more” of trillions of dollars for the super-rich and still pretend he’s their man. He enlarges the army saying he’s “for peace.” He’s Putin’s poodle but he claims to be “the toughest US president on Russia ever.” But he can’t condemn Racism?

Compare this to what his daughter, advisor to him, tweeted:

2:3 While Americans are blessed to live in a nation that protects liberty, freedom of speech and diversity of opinion, there is no place for white supremacy, racism and neo-nazism in our great country.

Don’t tell me that his off-remarks are just slips of the tongue/thumbs. There are too many slips – and worse, his anti-non-White immigrant policy is too prominent and there are personal accounts saying that he’s worse in person, here’s a recent one.

Compare big anti-Semites. They must condemn Israel – they have no choice. But often they pretend to have nothing against Jews. They will say that they admire them. (What gives them away is that they always lie about the Middle East facts to “justify” their criticism. Don’t argue them by saying that it’s not nice to hate Jews or Zionists – just find their lies and prove them wrong.) Why can’t Trump just love supremacists (and dictators) in secret and say without buts that he’s against racism period?

What I learned from psychological processes, such a giveaway is a scream for help. He’s flashing his racism to say: please cure me of this ill. But if that is possible, I doubt it. Con artists cannot progress psychologically because words have lost all meaning to them. I only have hope for honest supremacists, as this one.

However, long live the free press, never tired to spot racism and nail it.