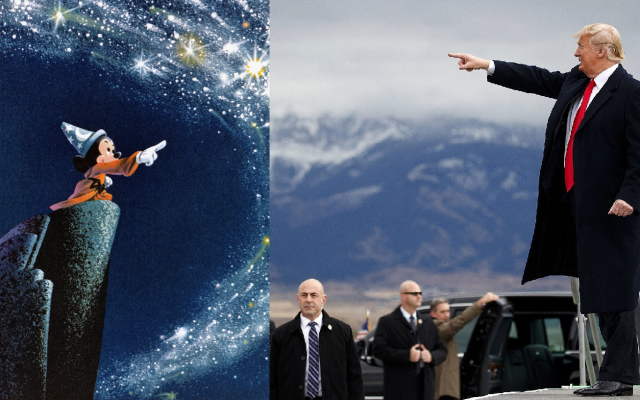 Mickey Mouse, as the legendary sorcerer's apprentice in the Walt Disney flagship cartoon movie Fantasia, next to a recent image of US President Donald Trump (here seen at his arrival for a campaign rally at Bozeman Yellowstone International Airport on November 3, 2018, in Belgrade, Montana. An AP Photo/Evan Vucci via Times of Israel)

Of course, we have the reason why Russia wanted Trump. He’s a moron. And as with all true morons, he doesn’t know. That’s dangerous.

(Not only the president behaves like an idiot. His State Department seems to compete with him. Today, it warns Americans abroad of violence in Gaza, the West Bank and Israel, including Jerusalem. The US sees tens of thousands of dead from gun violence a year. Proportionally, if the figure were the same in Israel, we should have 75 dead but in 2018, we had 13 deaths, 12 of which on the West Bank and 1 close to the Temple Mount. The most hilarious is the advice to look for bomb shelters. They only help in case of rocket attacks and there are none.)

But many have wondered what in the world moves Trump. Is he a traitor? A lying money grabber? A psychopath? A mob boss? Why did he mess up the successful US presence in Syria and repays the Kurds’ loyalty with abandonment? Because he already understands that he won’t get the Nobel Peace Prize anyway because brother Kim is a cheater? Watch Graham: He’s trying to make Trump reconsider!

But here we have what makes Trump tick, as seen in a recent picture.

Trump tries to copy the renowned sorcerer’s apprentice who sees his master do a few effortless tricks and thinks: I can do that. The mess he creates in the end is unbelievable. Trump’s presidency is a third remake of Fantasia’s the sorcerer’s apprentice. Well, then Trump is right on script!

Now we can understand the cape, the lust for standing on a podium, the predominantly red ties and the finger pointing!

As a teen, I once played against a chess grandmaster – when he played a simul against our whole school. At my board he waited the most time as my level of play made for the most erratic moves. That’s how Trump surprises his opponents. Not by brilliant analysis but by erratic moves.

Trump has been a useful idiot for the Republicans. But now, his utility has run out and he became a liability. Prepare for him needing to leave.

(We know that Trump’s mouth is never stopped by a lack of truth or facts but since I live in Israel, may I have the honor to say that the “wall” in Israel that he baselessly bragged stops 99.999% of the people is in fact for about 90–95% just a multi-layered fence system. Only in places where there is not enough width for that (in cities) or where sniper fire was popular, an eight-meter high concrete wall was constructed. It is questionable if the separation gives more than minimal protection.)

We hope you will enjoy our tonight’s viewing.