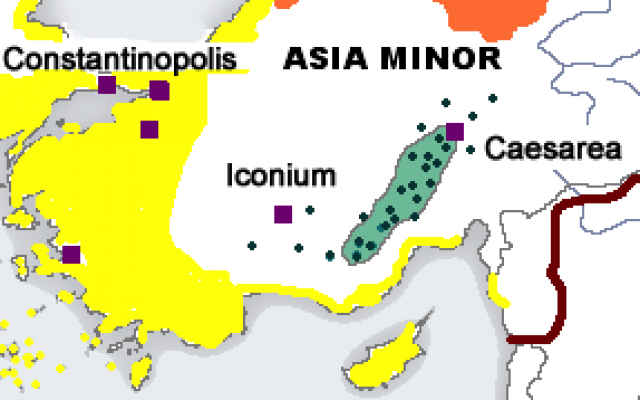 Distribution of Anatolian Greeks in 1910: Demotic Greek speakers in yellow, Pontic Greek in orange and Cappadocian Greek in green with individual villages indicated.

After my last blog post, sounding the alarm against Turks about to slaughter the Kurds like the Armenians, Heaven forbid, I received a friendly reaction from a reader, reminding me of another Turkish bloodbath, and I didn’t know about it: the Greek genocide – and I found Ottoman annihilation attempts of other Christian minorities.

The present Turkish regime persists its denial of also these genocides.

For over a 100 years, the Turks have not acknowledged their crimes against humanity, as if such acknowledgment would diminish them.

No, admission of sin and repentance does one honor, is to one’s credit.

And many people would sleep a lot sounder if Turkey would leave its militant genocidal history and humbly takes its rightful but modest place among the nations of the world.

The Kurds will try to survive this US betrayal too. You’d just wait and see if they’ll succeed? At what cost of human life and of our moral standing?

A new genocide may be imminent in Syria on the Kurds. Stop Turkey now! And Turkey would not be isolated if it acted like that! While that US also talks with everyone but … the Kurds.

Israel may save them, or Syria, or US promises. But don’t risk so many lives  or reassure yourself that all will be OK while we don ‘t know!

Call your favorite politician. Don’t be lazy when faced with mass murder.

Read here: it’s not too late. Prevention is the best medicine.