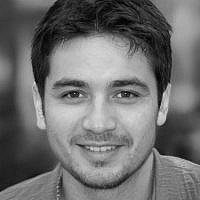 The Blogs
Ahmad al Khaled
Apply for a Blog
Advertisement
Please note that the posts on The Blogs are contributed by third parties. The opinions, facts and any media content in them are presented solely by the authors, and neither The Times of Israel nor its partners assume any responsibility for them. Please contact us in case of abuse. In case of abuse,
Report this post. 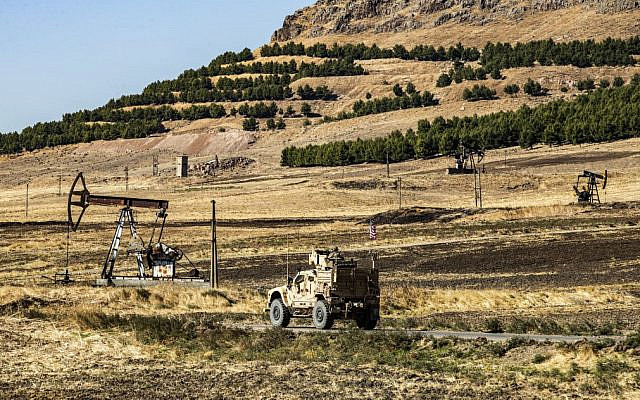 A US military armored vehicle drives in a patrol past a pumpjack operating at an oil well in Rumaylan in Syria's northeastern Hasakeh province on November 6, 2019. (Delil SOULEIMAN / AFP)

In late October, President Trump said that the US needs Syrian oil, and decided to deploy American troops to the oil facilities of northeastern Syria.

The president’s plan to focus on controlling Syria’s oil infrastructure is short-sighted and will not bring the US any benefits in the Syrian conflict. On the contrary, taking into consideration the complexity of the Syrian crisis, as well asunique features of the Syrian oil industry, the new strategy of the US administration can only harm Trump, which is especially risky in the run-up to the 2020 election.

The head of the White House overrates the importance of the Syrian oil. This can be explained by the fact that Trump builds policy based on his extensive professional and life experience, but the era in which he gained that experience are long gone. Modern conflicts fundamentally differ from all past wars. Back in the old days, success was determined by the control of key positions and the resource infrastructure, but in modern warfare, the role of humanitarian and targeted special operations came to the fore. Trump’s paradigm is hopelessly outdated and should be made subject of an analysis conducted through a modern prism.

First, Trump took an extremely vulnerable position, taking the Kurds’ side in the oil issue. The main problem of the Syrian Kurds is that their only client is Assad. Here’s why: the Kurds do not have access to the oil terminals on the Syrian coast and the west of the country is under Damascus’s control, meaning that the Kurds are not able to export hydrocarbon. Iraq, to the east, has colossal oil reserves compared to Syria. It means that Iraqis are also not interested in imported oil. That leaves only Turkey, but any business relations between the Turks and Kurds are out of the question, considering Ankara’s desire to wipe Kurdistan off.

Thus, the Kurds will continue to sell oil to Assad, because they simply have no choice. It is known that fuel is transported across the Euphrates to the territory controlled by Damascus via improvised oil pipelines, as well as by tankers. A Qatarji company that is tied to Assad and, like the Syrian president, also under US sanctions, receives the smuggled oil on the government’s behalf.

This is where the trap for Trump lies: having established control over oil production, he actually legalized oil smuggling for Assad, violating his own restrictions. At the same time, the United States is not able to end this, due to objective reasons. The American contingent is too limited to establish total control over oil supplies and halt smuggling. In addition, as mentioned above, the Kurds simply have no one else to sell fuel to, so they operate quite rationally. Just business, nothing personal. This legal and ethical conflict can be easily exploited by Trump’s opponents and critics.

The second danger for the president lies in the fact that his decision to evacuate three-quarters of the US troops from Syria puts the American soldiers remaining there at risk. As of now, approximately 500 US servicemen are deployed to Syria, 200 of them are located at the al Tanf American base on the border with Jordan. It means that only 300 soldiers can carry out service at oil facilities. Given the number of oil wells, each of them is guarded by no more than a dozen military personnel, which makes them easy targets for ISIS terrorists, whose number, according to various estimates, still measures in the thousands.

The United States has always been in the vanguard of the international terrorism battle, but voters will not forgive Trump the soldiers’ deaths that came as expense for the Syrian oil in abandoned and destroyed facilities. Trump’s belief in the “omnipotence” of hydrocarbon could turn into a tragedy for hundreds of American families and end his political career.

Another important detail is also worth noting: there is very little oil in Syria and the economic benefits to a trillion-dollar budget country are dubious, to say the least. According to British Petroleum report, even in the pre-war years, the Arab Republic produced a little more fuel than it needed for internal consumption, and the volume of exports was rather symbolic. It is obvious that the Syrian conflict, ongoing since 2011, has caused enormous damage to the oil industry, reducing production multiply. Trump himself estimates that the proceeds from the sale of the Syrian oil have reached $30 million per month, which should go to support the Kurds and American military activities in northeastern Syria. Considering that about two million Kurds live in this region, per capita income is about $15. It is also clear that income at this level is not enough to support the US troops operation, and Americans will continue to pay for it on their own.

In addition, by capturing oil fields, the White House demonstrates disrespect for the property rights of its partners. It may also negatively affect relations with foreign business elites, primarily with Persian Gulf oil producers. Oil is the main source of income for Saudi Arabia, Kuwait, and the UAE, so Washington’s policies in Syria will make allies wary of cooperation with the United States. Washington risks spoiling its business and international image.

Thus, modest stocks of the Syrian oil may have a disproportionately significant impact on the policies of the most powerful country in the world. The current US leader’s obsolete views on the world order and the desire to control fuel production at all costs could turn into a breakdown in Syria and, as a result, reduce Trump’s chances in the presidential race.

About the Author
Ahmad al Khaled is a Syrian journalist who covers the Syrian conflict and Middle East politics in general. His publications have appeared in the Jerusalem Post, Youm 7, and other leading regional outlets.
Related Topics
Related Posts
Comments