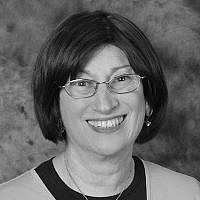 The Blogs
Tova Taragin
Apply for a Blog
Please note that the posts on The Blogs are contributed by third parties. The opinions, facts and any media content in them are presented solely by the authors, and neither The Times of Israel nor its partners assume any responsibility for them. Please contact us in case of abuse. In case of abuse,
Report this post.

People often ask me how I became so Zionist. And I always respond that it started before I could walk. I was born in 1948, the year of hakamat hamedina.  My parents (of blessed memory) dated during the years prior.  I heard stories growing up about how my father took the subway from the Bronx and my mother from Boro Park to meet in the middle, at Madison Square Garden, to attend rallies supporting Israel. They married in January 1947 and in July 1948 (7 Tamuz), they had their first child, me. I always felt a connection to medinat Yisrael because it was my older sibling, by 2 months.  I remember my parents being very outspoken about the fact that I would have only a Hebrew name — no English name for me or my sister. Thank G-d no one has trouble pronouncing Tova.

In 1956 Israel and I were 8 years old. I remember going to an assembly in my elementary school, Yeshiva Dov Revel, to daven and say Tehillim during the Suez campaign. My school was very Zionistic, and all the songs we learned in music class were the songs of the early chalutzim. We learned Ivrit b’Ivrit, which was a new educational model in the 50s. My parents sent me to Camp Moshava in 1960 to further my love for Israel and Camp Massad Bet, a completely Hebrew-speaking camp, to strengthen that ability when Israel and I were 14. Later, in Camp Morasha, all announcements were made in Hebrew.  (I believe this skill helped me get my Israeli Bezeq phone bill reduced recently, speaking totally b’Ivrit).

In 1967, Israel and I were 19, and I was in Stern College during the outbreak of the Six Day War. Even though it was finals week, we went out on the streets of Manhattan to collect money for Israel. Later in the week there was a massive rally planned in Washington, DC. We were given the choice to go to the rally and take that day’s finals in September or remain in school. I went to Washington. The feeling of pride seeing I-95 between New York and DC with wall to wall buses filled with all types of Jews was indescribable. It was at this rally 51 years ago that we heard about the reunification of Jerusalem. It was a moment in history I will never forget.

I visited Israel for the first time in 1969.  Israel and I were both 21 at the time, and I took a post- college graduation trip.  I was there for six weeks with a friend.  I spent two weeks living in the Hebrew University dormitory.  For the next two weeks I was a delegate at an international collegiate youth conference at Bar Ilan University.  I, along with several others, represented Yavneh, an organization of Jewish college students that was in existence from the 1960s until the early 1980s.  As conference participants, we went on tiyulim and participated in sessions aimed at promoting the Jewish identity of college students throughout the world. I spent a Shabbat at Kibbutz Lavi — not the resort that many people visit now, but the actual kibbutz.  I stayed with a kibbutz family, ate in the chadar ochel with them, and visited the milking stations and fruit picking areas. I met many former Americans who had made aliyah. The last two weeks of my trip, my friend and I rented an apartment in Bayit Vegan.   We spent time walking down Rechov Yafo through the shuk, the center of town to the Old City. When I think back to that trip, I marvel at how things have changed so drastically in over 50 years.  My trip in 1969 cemented my love of Israel and made me want to return again and again.

As it turns out, I didn’t return to Israel until 1990 when Israel and I were both 42.  I visited with my husband for his first time. Even though it took him a while to get there, he fell in love immediately, and we decided we needed Israel in our lives more.  We took several more trips, and in 2000 we were fortunate enough to be able to buy an apartment outside of Jerusalem.  We try to take extended trips at least twice a year. When we are there, we feel like we are truly living there.  I am saddened by the fact, that due to the Coronavirus, my husband and I will l not be boarding a plane tomorrow night, to spend the month of May in Israel, as originally planned.

My early exposure to Israel activism has continued throughout my life.  When Israel and I turned 67, I became very active in an organization called ACHI, American Communities Helping Israel. The goal of ACHI is to help Israel’s economy by increasing consumption of Israeli goods, to alleviate hunger, to create a greater awareness for the importance of helping our brothers and sisters in Israel (ACHI means my brother), and to promote a feeling of achdut (unity) among all Jews.

Everyone can join this effort by dedicating a KLEE at home and keeping it constantly filled with Israeli products. A description and directions can be found with this video, https://youtu.be/H2NafAUvedQ  made by ACHI in honor of Yom Haatzamut. This way we, in our small way, can change BDS into Buy, Display and Support.

Now that Israel and I are turning 72, I think about how proud I am of the country that she has become, and I look forward to supporting her for a long time. I hope that Israel and I share many more birthdays together.

About the Author
Tova Taragin is a retired Jewish Studies and Educational Technology teacher, living in Baltimore, MD for almost 50 years. She lives part time in Ramat Beit Shemesh, and considers both cities "home." Tova is an active member of ACHI, American Communities Helping Israel, a grassroots organization whose tag line is, Think Israel-Buy Israeli, trying to keep Israel in the hearts and minds of Jews of all ages.
Related Topics
Related Posts
Comments