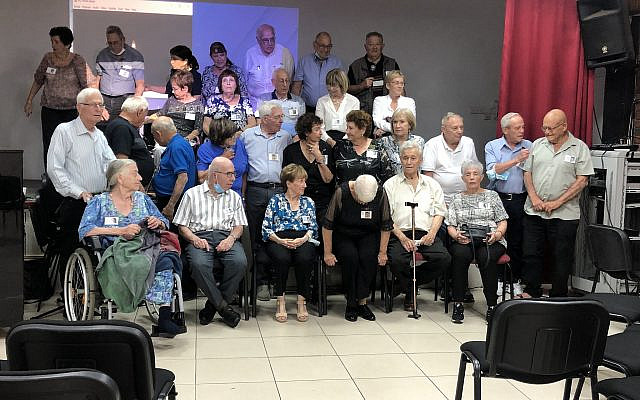 A reunion of people who, like my husband, were born in 1940, i.e. now aged eighty, might sound over-optimistic, but these were no ordinary people. These were men and women who were born and brought up in Kiryat Haim, a settlement situated on the coast slightly north of Haifa. Kiryat Haim was founded in the early 1940s by people, halutzim, idealists who had come to Israel from Russia and Poland to help build the Jewish State. They were all Labour Party stalwarts and their offspring attended the local high school and became devoted members of the Working and Studying Youth Movement (Noar Oved veLomed),

Inevitably, the reunion organisers were at pains to point out the many gaps and losses in their number, but nonetheless, some fifty former members of the youth movement, accompanied by spouses, came from all corners of the country (and one even from the USA) to participate in the event. Most of them seemed relatively sprightly, though one participant was in a wheelchair, one or two of them were using walking sticks, and of course there were many bent backs and instances of bald heads or scanty grey hair, but on the whole the overall impression was of a crowd of mentally and physically active pensioners with a lively sense of humour. These were people who had been involved in every stage of Israel’s existence, and represented the best of its population.

Every participant was equipped with a tag bearing his or her name and a photo of themselves from the time when they had all been eighteen years old, just about to enlist in the army or to embark on whatever path in life they had chosen. There were many exclamations of surprise and delight as the old-timers peered at one another’s name tags and rediscovered one another, many of them bearing very little resemblance today to their youthful selves.

The event was well-organised, providing a welcome spread of coffee and cake as everyone arrived after having braved the traffic and traffic jams on the way to the meeting place. After allowing an hour for everyone to greet and re-establish old friendships, a session was devoted to speeches by the organisers, who had dug out the minutes of the meetings held in the youth movement and read out reports of the activities undertaken at the time. Others of the participants went up to the microphone and shared their thoughts and reminiscences. One participant had even written a poem for the occasion. All this occasioned much appreciation, laughter and friendly banter as long-buried memories were brought back to life.

As is essential on such occasions, a generous buffet lunch was provided, offering a wide variety of aesthetically-presented salads and quiches, served on recyclable plates and cutlery, followed by a delectable dessert. Cold drinks (but no alcohol) were on hand, and it was a joy to see the senior citizens tucking into their food with gusto as they chatted to one another, trying to catch up on the events of the sixty years in which they had not had contact with one another.

As people ate a series of photos from those youthful years appeared on a large screen at the back of the hall, and people took pleasure in recognising themselves and one another. In those far-off days they all wore shorts and singlets, though none of them would venture to wear that kind of attire today. The meal was followed by a recital by one of the participants, Eitan Vardi, who is a veritable virtuoso on the recorder – playing and explaining the various categories of instrument, all of which were made in Kibbutz Geva. Accompanied by a talented young musician on the piano, he demonstrated and talked about the pieces he played for almost an hour. Before moving on to the next activity, everyone was summoned to the stage to pose for a group photo.

And finally came the pièce de resistance, as song sheets were handed out to the assembled throng and, led by Eitan Vardi on the recorder, roared out the songs they had sung as youngsters. A few insisted on singing the International and the movement’s anthem. Some of the participants were visibly moved and could hardly hold back the tears as they sang. The final song on the song sheet was one that was composed only at a later date, a touching and surprisingly optimistic song called ‘The Party’s Over’ by Naomi Shemer. But I must confess it was truly inspiring to hear the crowd of eighty-year-olds enthusiastically sing the words ‘Time to get up the next morning and start all over again.’

Let’s hope they all find the strength to do just that.