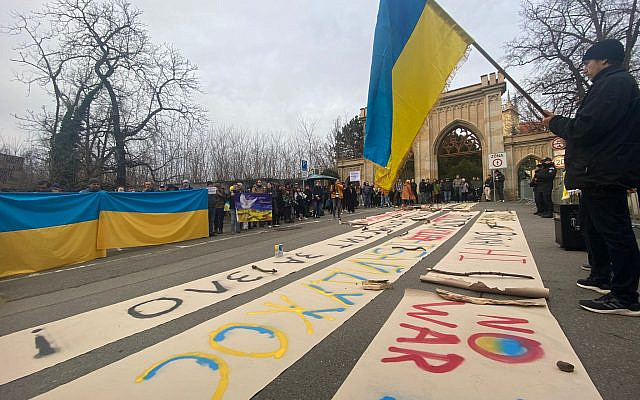 A protest demonstration in favor of Ukraine outside the Russian embassy in Prague, Czech Republic. Photo: Allia Bukhari

In the wake of the escalated tensions between Ukraine and Russia, over one million Ukrainians have fled the country since the start of the Russian attacks, crossing into Poland and other Central-Eastern European states. The ramifications from the incursion of Ukraine are anticipated to be huge with the refugee crisis taking center stage in Europe in the times to come. Some are considering it the biggest attack in the continent by one state on another since World War II. The United Nations estimates around 5 million people could be displaced. Ukraine’s defense minister, in December, had warned a Russian invasion could force between three and five million people to flee their homes.

In an emotionally uplifting show of solidarity, the Visegrad Four countries  —  comprising Poland, Hungary, Czech Republic and Slovakia  —  once part of Moscow-backed Warsaw Pact, have pledged to accept Ukrainians escaping war and vowed to help them while condemning Putin’s actions at the same time.

Poland, which only recently was criticized by human rights groups for its treatment of migrants and refugees —mainly coming from the Middle East and Africa —on the border with Belarus and whose police used water cannons to push refugees back into Belarusian forest, with the aim of letting them freeze to death, will set up reception centers and provide meals and medical care to those fleeing Ukraine. Not long ago, Warsaw started constructing a wall to prevent refugee crossings in the future.

In a similar vein, Czech Republic and Hungary, whose leaders have had sympathies with Moscow in the past, condemned the latter’s actions — as it should be by all means— while agreeing to accept refugees from Ukraine and providing them with humanitarian aid.

Slovakia, a fairly small country in the region with a population of about 5.5 million, said it will welcome Ukrainian refugees and they will be given a temporary status with free healthcare and a possibility of doing legal work – showing the world how it should be done.

Ukrainians are facing a crisis of biblical proportions and this is the kind of compassion they deserve. Probably more. The geographical proximity and a shared communist past further binds these countries together. And yet, I cannot help but compare the attitude of the aforementioned countries towards the victims of war coming from some other parts of the world, predominantly the Middle East, and assess their double standards and a lack of moral superiority and high ground.

The backsliding of liberal democracy in these Central-Eastern European states through concentration of power in the hands of populist parties —  the Law and Justice Party (PiS) in Poland, Viktor Orban’s Fidesz party post 2010 in Hungary  or ANO party led coalition governments in the Czech Republic —  has been synonymous with a hardline towards migration for quite some time; more so because of the ethno-religious backgrounds of refugees hailing from Syria, Iraq, and Afghanistan.

By “racializing” the immigrant threat, normalizing anti-immigrant and anti-Muslim rhetoric and terming and presenting refugees as economic migrants trying to steal resources — in an attempt to take away from their plight —  these parties have a history of cashing on votes and the public sentiments by spreading xenophobia and making their already skeptical populations fearful and wary of the “unwanted outsiders”, mainly brown Muslims.

The influx of refugees escaping war and persecution was projected as some kind of “Muslim invasion”; a point of view often repeated by populist leaders like Orban, who in opposition to multiculturalism, along with Czech Republic’s Milos Zeman, has acted as a defender of traditional Christian values spearheaded by white supremacists, and hence opposed any kind of integration with the Muslim refugees.

Most of the xenophobic statements are on record.

In 2016, then Slovak prime minister Robert Fico blamed migrants for terror threat citing attacks in Germany and France, vowing to  “never bring even a single Muslim to Slovakia” and asserting that Islam has no place in the country.

Czech Republic’s Miloš Zeman warned Europe of an “organized invasion” of migrants and advised men coming from the Middle East to take up arms and fight against the Islamic State instead of heading for Europe to seek asylum; again ignoring and blatantly disregarding the suffering they had endured and associating them with terror and security challenges solely based on their faith, background and color of the skin. Former premier Andrej Babiš too opposed large formation of the Muslim community in the Czech Republic.

Most recently, this xenophobic tirade was visible in the statement of Viktor Orban who in December last year said, integrating Bosnia into the EU would be a challenge because of its 2 million Muslims, drawing condemnation from Sarajevo.

It is common for workers from neighboring eastern countries to get to the V4 states; tens of thousands economic migrants come every year and their presence isn’t opposed or met with any resistance. A threat of brown Muslim brown refugees, as meagre as it may be, however, is exacerbated and politicized, and it speaks volumes about the status quo in these countries.

The xenophobic attitude and concerns about the incompatibility of brown Muslim refugees in these states is also reflected in the public opinion, and despite a small Muslim population compared to the Western Europe, only few people see integration with refugees from a distant culture possible. A 2019 report by Pew Research Centre revealed that “more favorable views of Muslims exist in Western Europe, Russia and Ukraine while more negative attitudes persist in Southern, Central and Eastern Europe,” adding that majorities in Slovakia, Poland, the Czech Republic, Hungary along with Lithuania, Greece and Italy had unfavorable views of Muslims. A lack of heterogeneity and no exposure with Muslims and refugees from a “different culture” further fuels and feeds misconceptions  about them.

Adding to this, bigoted views now being openly expressed during the coverage of Ukraine crisis have revealed and reminded prevalence of quite a few things: naked racism, hypocrisy, white superiority and dehumanization of non-white refugees. It was an open secret that discrimination existed but for it to be expressed openly is bone chilling and somehow forcing many to point out problematic double standards in treatment of migrants and refugees solely based on the latter’s religion and skin color.