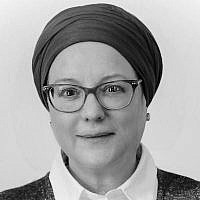 The Blogs
Chaya Rivka Zwolinski
Joy is essential to your spiritual journey.
Apply for a Blog
Advertisement
Please note that the posts on The Blogs are contributed by third parties. The opinions, facts and any media content in them are presented solely by the authors, and neither The Times of Israel nor its partners assume any responsibility for them. Please contact us in case of abuse. In case of abuse,
Report this post. 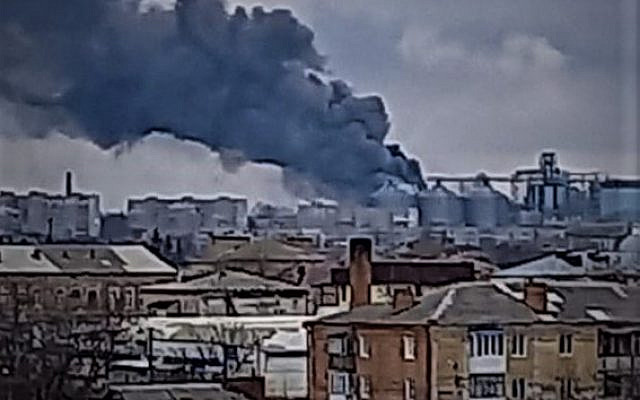 My relationship with Ukraine is complicated. My paternal grandmother’s family lived in “the Ukraine,” as it was called, a territory that for centuries was attacked by various invaders and occupying powers—Mongols, Poles, Russians, the Austro-Hungarian empire, and eventually the Soviet Union. As a young girl, my grandmother, born in 1903, witnessed a pogrom. She didn’t “know from Ukraine” – to her, everyone was simply Russian.

About 100 years after she experienced this antisemitic mayhem, I made my first trip to Ukraine. I went to pray at the gravesites of various tzaddikim, culminating at Rebbe Nachman’s gravesite in Uman. Like any other Jew who has visited her ancestors’ diaspora homeland, there was an intense feeling of connection along with palpable pain for all the suffering endured.

A few years later, I began leading women’s tours to these holy gravesites in Ukraine with the Breslov Research Institute, while also making several personal trips. Along the way, in addition to the many Israeli, Ukrainian and American Jews, I met—and in some cases worked alongside—Ukrainians. While it’s true there were undeniably negative encounters, there were also positive ones, some of which were quite moving. But that’s another story.

Now, since Russia’s incursion and its brutal killing of Ukraine’s civilians, my thoughts and feelings are those of general sorrow—for loss of life and for families driven from their homes. Most of all though, there’s been a constant thrum of worry for my Jewish friends who are now refugees, hunkering down in Eastern Europe, or on their way to Israel or the United States, or, for some, still in Ukraine.

Personally, I’ve found some comfort, and more important, have hopefully brought some comfort to others, by “doing something”—but always beginning with prayer. As Rebbe Nachman of Breslov advises, don’t wait until you’ve tried everything else, begin with prayer. He teaches that when we begin with prayer, connecting to God, we can move forward with greater yishuv hada’at, peace of mind.

Rebbe Nachman also specifically reminds us to not rely on our own understanding; to move forward humbly, knowing that what we don’t know massively exceeds what we do. Certainly, my understanding of the situation in Ukraine changes day by day. Does anyone truly understand what the point of this war is? From an American perspective I look at the timing, and the fact that we are, in essence, funding the invasion through Russian oil purchases while ignoring growing threats from Iran and China, and I can only say: I know nothing. Yet, I’ve heard multiple people from every place on the spectrum, professing they’ve got the inside track to the truth. I’m happy to say: I don’t.

And that’s what’s on my mind today. The experts are pontificating—the professional pundits and politicians as well as the self-anointed gurus, talk-show hosts and the “man in the street.” But not everyone has time for analyzing—least of all the people running for their lives. They are real people, with real lives, lives that have just been upended. They are shlepping suitcases of memories; each one individual and unique, each person with his or her own fears, hopes, good points and not-so-good points.

War, even from my Brooklyn apartment, has shocked me into empathy for people whose grandmothers may have hated—and done worse, if given the chance—mine. I’m hard pressed to feel any satisfaction of midda k’neged midda. It’s difficult to think of human beings, shivering with cold, fear and sorrow.  I’m davening for peace all around, and of course mainly davening for my Jewish brothers and sisters, because a genuinely pointless war has turned a stunned generation of Eastern European Jews into refugees once more. I also find solace in the fact that many are headed to the Eretz Yisrael.

Two hundred years ago, Rebbe Nachman of Breslov was clear in his opposition to the stupid devastation of war: “Many of the foolish beliefs people of earlier times used to have, such as the idolatry of child-sacrifice to Molekh, have disappeared. But so far, the foolish belief in war, hasn’t yet disappeared.” (Chayey Moharan)

He takes an unusual, blistering tone as he decries the inanity of scientists who devote their talents to developing weapons of mass destruction. “What great sages they must be,” he says, “to develop incredible weapons that can kill thousands of people at once. Is there any greater foolishness than murdering so many people for nothing?” (Chayey Moharan)

It’s stunningly difficult to make sense of the whys of this war, the layers of politics of this situation. Yet, Rebbe Nachman’s teachings give us a way to understand this war, and all conflict, on a personal, psycho-spiritual level. He makes it real for us, gives us a taste of our own psyches. War, explains the Rebbe, is simply an externalization of the microcosmic war within each of us.

“A man living in isolation can become insane. Within him are all the warring nations. His personality at a particular time is that of the victorious nation. Each time a different nation is victorious, he must change, since he plays the roles of all the nations. This can drive him insane, for he is alone and cannot express the war within him.” (Rebbe Nachman’s Wisdom, English translation of Sichot HaRan, by the Breslov Research Institute)

It seems to follow that once war, or any discord, takes place externally, a person may more comfortably be able to assess what’s true and what isn’t, who’s an ally, and who’s not. War authorizes us to forget, even neglect, our differences with others, and especially of great import today, offers us an easy opening through which we can bypass intramural Jewish conflict. War gives us permission to love one another, no matter how foolish, stubborn, or ignorant we might (arrogantly) think those that disagree with us are.

There’s an old joke: A Jew gets stranded on a desert island. Finally, after a year or so, a plane spots his campfire and lands on the beach in order to rescue him. The Jew gives the pilot a walking tour of the camp he built—This is the hut where I sleep! This is my vegetable garden! They walk a little farther, and the pilot asks—What are those two huts over there? The Jew answers—That hut is the shul I go to, and the other one is the shul I won’t step foot in. War opens the door to the other shul.

Yesterday, as I compulsively checked my WhatsApp for the stunted progress of a young, pregnant friend from Uman and her two young, good natured but very active children, as they make their way (finally!) towards the border, in a van packed with strangers, I worried about the little things: What if she has to use the bathroom? Does she have enough bottled water, tissues and kosher nosh? Is she able to stretch and get a little fresh air? When I began to write this, they had been on the road 11 hours and had traveled only 254 km of an 860 km trip, stuck between Vinnytsia and Medzhybizh, inching forward, lights off, as Russian planes flew overhead. The videos and pictures brought me into that cramped van, with her, her children, and the Ukrainian locals crowded all together, silent with hearts in their throats as they listened to the plane engines. The texts and videos and photos brought me, by extension, to all the Jews fleeing from the horror of this war, and those who are actively praying and caring, from wherever they sit, for Jewish brothers and sisters. While the nations fight on the outside, we, please God, are given an opportunity to grow closer on the inside.

About the Author
Chaya Rivka Zwolinski, author of May You Have a Day: Making Every Day Better with the Teachings of Rebbe Nachman of Breslov, Mashiach: Hope for Turbulent Times, and other books, is the leading teacher of Breslov joy and inspiration for women in North America today. She also speaks to and coaches students on six continents. Join her for her workshops, tours, live and Zoom classes, free daily WhatsApp mini-lessons and more. Visit her at BreslovWoman.org and find more connections and peace in your relationships with God, other people, and yourself.
Related Topics
Related Posts
Comments