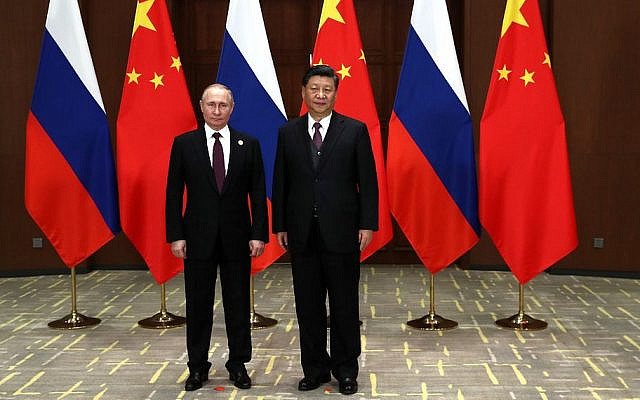 On February 4, Chinese President Xi Jinping and Russian President Vladimir Putin met in Beijing. They declared that their friendship was eternal, that it had “no limits”. True to that assertion, China has stayed silent in the UN Security Council and the General Assembly when it came to condemning the Russian invasion of Ukraine. The question is, will China have to pay a price for upholding the friendship and what does this portend for Israel and the Middle East. Prime Minister Bennett has already made several attempts at mediation. While there are strong Jewish communities in Russia and Ukraine, and Russia’s prodigal son, Roman Abrahmovic is a dual Israeli-Russian citizen, Israel’s interest is intricically tied with the Russia-Ukraine quagmire. Israel needs Russia on Iran and on Syria, not to mention to address several security issues in the Middle East. However Israel cannot abandon Ukraine neither can it turn its back on its all time ally-the United States.

Coming back to China, China’s claim on Taiwan is that its an integral part of the mainland. Also, that Hong Kong in an inalienable part of the country. To prevent the United States from intervening in Taiwan or Hong Kong and helping them exert their independence, China has always insisted on the promotion of the principle non-interference in the internal affairs of other nations.

Then, how can it justify supporting Russia which is invading Ukraine against all international laws? By doing so, would it not be losing the moral high ground to keep the US interference in  Taiwan or Hong Kong?

In the last few years, China, under President Xi Jinping , has been trying to project its influence across the world. While it is using the Belt and Road Initiative (BRI)  to this end, it is also been building its influence in the UN and UN organisations like WHO, ILO etc.. It influences critical issues and makes its presence felt and voice heard. It aims at gaining better acceptability from the world community. The same community, which China is unable to influence on Russia.

As part of the BRI project, China has spent years of goodwill and investment in projects in Ukraine. The fate of these projects is under question now as is Chinese exposure, infact China has asked its financial institutions to review exposure to Russia and Ukraine.

China’s abstention on Russia as well as more recently, news that it is evaluating the purchase of shares in Russian oil and gas companies, as well as allowing Russian banks to use UnionPay to replace Mastercard and Visa, are costing it its hard earned credibility in the international fora. While it has repeatedly challenged the formation of the Quad in the Indo-Pacific, this more and more looks like an attempt to develop a China-Russia-Pakistan triad against the US and US interests. Paradoxically China is the largest trading partner to Ukraine and to Russia. As time passes, it looks like China is desperately trying to profit from helping Russia bust the US and EU sanctions.

The trade may be continuing despite western sanctions, but Chinese traders and exporters are already feeling the pinch. On the one hand, several Ukrainian clients are cancelling orders. On the other, Russian clients say they are unable to pay for goods and services coming from China because of the sudden devaluation of the Russian rouble. As the war continues, traders from both sides are expected to lose their purchasing power and that would adversely impact China’s trade with both countries.

Chinese factories are worried that the Ukraine invasion will lead to labour scarcity in the logistics sector. Nearly 15 per cent of the world’s shipping workforce is made up of Russian and Ukrainian seamen.

With SWIFT transactions ruled out for Russia, the China-Russia trade, if it to be conducted uninterrupted, will have to be in terms of yuan transactions. That may strengthen the yuan but that will adversely affect the Chinese exports. While China seems to want to make Russia dependant on itself, it also seems to want to profit from Russia’s limited market for its oil, gas and minerals.

However this new alliance of the “dragon-bear” is a challenge for Israel which enjoy’s close relationships with both countries as well as the US and Ukraine. Already Israel was forced to choose sides before the Ukraine invasions on questions of Xinxiang and human rights. While Prime Minister Bennett has tried his best to play peacemaker, is he prepared for a new geopolitical era where he has to choose sides between a China-Russia or US alliance.