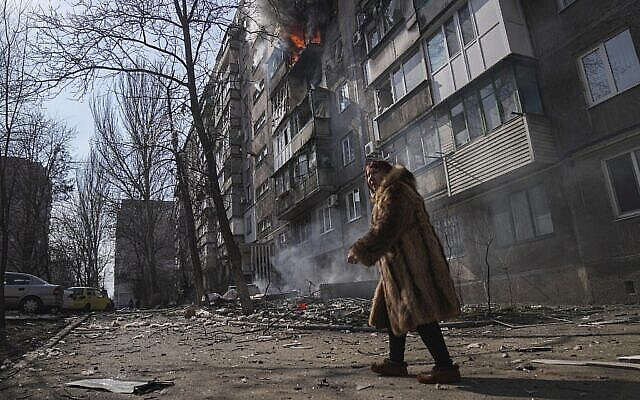 “We have to respect the ruthless truth of war.”

The “Russian Bear”, as it is known in the Russian imagination, represents among other things the 16th century myth that these animals left the forests during the winter to go to houses in search of food, causing families to leave their homes in horror and then die from the cold. In fact, the political party of the terrible, ruthless and dangerous Putin uses a bear as its image. “United Russia”, under that name the new tyrant seized power of the nation that had previously also been ruled by a monster: Stalin.

This is not the first time Russia has wreaked havoc. The mass rapes perpetuated by Russian soldiers and officers on German women and girls have a dark place in contemporary history. Some estimate that the Soviets may have sexually abused as many as 2 million German women and girls, including children who were abused and in many cases murdered. In addition, in many cases there was “mass rape” where the victim was raped by the same or different men up to 70 times or until she breathed her last breath, and even after that.

For example, of the estimated number of women raped in Berlin alone after the fall of the Reich, at least 100,000 women were abused, of which 10,000 were murdered as a result of this transgression. Thus, 10% of the victims did not resist this humiliation, which, more than physical pleasure, gave the perpetrator a perverse satisfaction as if it were a trophy. Humiliation, anger, fear, arrogance, disgust, among many other things, is what those women and children felt. Even if they had survived such a horrible, inhumane and merciless act, a part of their lives died in that sinister event.

Russian war correspondent Natalya Gesse asserted that the Red Army was an “army of rapists” that had carnal access to girls from the age of eight to women in their 80s. For Professor Alexander Statiev, the Soviets found in aggression against civilians their victory celebration.

Violence nourished their victor’s ego, so the more ruthless they were, the more victorious they felt. And to take on women and girls, the most fragile and unprotected in history, shows in itself a great level of cowardice and dehumanisation. Although it was not only the Soviets who were the first and only ones to take advantage of women and children, but other troops did the same, and history leads to very similar episodes in other times, but the Soviets were and are among the most ruthless. Mass or gang rape is a hallmark of their wartime actions, as is torture.

The German World War II historians Theodor Schieder and Hans Rothfel documented the testimonies of women victims of the Soviet army in 1953 under the title “Documentation of the Expulsion of Germans from East-Central Europe”. There, Anna Schwartz, one of the victims, argued that “the Soviet occupation of Eastern Europe began, literally and symbolically, with the forcible occupation of German women’s bodies”.

It was also etched into the memory of this written compilation that visual images and sexual undertones were also present there, as German women bore the scars of the Red Army soldiers’ rapes as war wounds. Indeed, the general consensus of the women interviewed focused on how, once the Russians arrived, “no woman or girl was safe from the liberators”.

After an absurd number of women and girls were raped, tortured and even killed, history repeats itself – wasn’t it enough what women of a couple of generations ago went through, and what’s more, are these events now forgotten?

Well, there is no reasonable explanation for the events in Bucha. Whoever denies this genocide also denies his or her capacity for understanding and violates his or her conscience.

People burned, mutilated, tortured and, of course, raped women and children – that is what the Russian troops shamelessly left in the open, amidst the threat and cruelty. A message to Ukraine of course, but more than that, a message to Europe and the United States.

Putin has given the order to tear the Ukrainian people apart, and within that crusade, civilians are one of the main targets, in the quest to demoralise and cow the brave Ukrainian citizens who, along with their president, have demonstrated sufficient resistance and resilience, despite defending themselves alone and at a great disadvantage against the new machinery of terror. Just like the Nazi terror machine, even if Putin calls Zelensky by this adjective, he and his collaborators are the new Nazis.

Ukrainian women and girls become one of the main victims of the war, through sexual abuse as a weapon of war by the perpetrators. As it has been revealed what happened in the territories occupied by the Russians, sexual assaults at gunpoint, mass rapes, torture and even rapes committed in front of children have been found. The women and children who have suffered these terrible events, some are being accompanied by professionals, however, the figures are not clear and there is a lot of silence.

What remains is the hope that there will eventually be a trial, as rape and sexual assault are considered war crimes and are against international humanitarian law. There will have to be a kind of new Nuremberg trials, this time against Vladimir Putin and his terror squad.

In Bucha, a major city in Kiev Oblast, a genocide took place. At least 400 civilians were viciously murdered. Most of the women were sexually abused before being executed, found naked, shot and burned. There are cases of burnt people and even whole families who met their end like this. Also, elderly people who died of starvation. Orphans were kidnapped, children were taken away. Dogs who died of starvation in the dog shelter, that happened too.

When Zelensky and his government speak of a genocide they are telling the truth, whoever does not want to see these events as genocide, something is not right. Also, the Russian government has created a Nazi-like propaganda from the Kremlin and the FGB (Federal Security Service, formerly the KGB) to demystify and try to hide the horrible crimes against Ukrainian civilians that they are committing. The fact that the massacres cannot yet be compared with the most terrible genocide in contemporary history, i.e. the Holocaust or the “Shoah”, does not mean that what has happened in Bucha, Mariupol and Volnovaja, etc., is not genocide, and that it will become a new Babi Yar, that ravine of death on the outskirts of Kiev which has a figure of up to 150,000 innocent civilians killed, mostly Ukrainian Jews, but also Soviet prisoners of war, partisans, gypsies and communists.

In turn, Putin’s alibi is to claim that he is “denazifying” Ukraine, using as a scapegoat the Azov squad, which, while neonazi, is also the result of Russia’s historical harassment of Ukraine. Azov is a civilian militia that is now part of the Ukrainian military defence and has managed to give a good response to Russian troops. Putin took advantage of this situation to justify the massacres they have carried out, and there are more than one.

On the other hand, Putin uses mercenaries who are not in the least interested in the type of conflict but in money and blood. Among the myriad of mercenaries and foreign armies Putin is using in his plan to invade Ukraine and perhaps later Europe, is the Wagner group, a veritable Nazi squad. Its name is evidence of this even, for Wagner is by Richard Wagner Hitler’s favourite composer, the same as the “Ride of the Valkyries”.

This unofficial paramilitary group was founded by Dmitry Valeryevich Utkin, a ruthless former Russian military officer who has been involved in horrendous operations in the area and is now a terror protagonist in Ukraine. Utkin is known to be a lover of Hitler and the Third Reich, and has Waffen-SS and Reichsadler tattoos on his neck and chest.

Likewise, the Wagner Group’s ringleaders have been photographed and filmed in Nazi uniforms, again recreating events of the Second World War. Their aim is clear, to replicate the terrible events that bathed Europe in blood in those days …. Utkin has been accused of being “responsible for serious human rights abuses, including torture and extrajudicial, summary or arbitrary executions”. In fact, on 13 December 2021, the Council of the European Union imposed restrictive measures against Utkin and other individuals linked to the Wagner Group.

Wagner, being a “secret” mercenary group, and having no official relationship with the government, acts in a ruthless manner with no lessons in humanity, only in the interest of money. Yevgeny Prigozhin, better known as “Putin’s chef”, is the man behind Wagner. This Russian oligarch is involved in various affairs of the regime, especially this one of the mercenaries.

In short, the war crimes that have so far claimed at least 2,000 lives and forced hundreds of thousands of people to emigrate will at some point be brought to trial. We are facing a new genocide and it cannot be kept quiet, despite the fact that there are those who deny it or do not want to pay enough attention to it or simply abstain. Albert Einstein, the genius of the last century who lived through the terror of the Nazi extermination machine, said well: “Life is very dangerous. Not because of the people who do evil, but because of those who sit back and watch it happen.