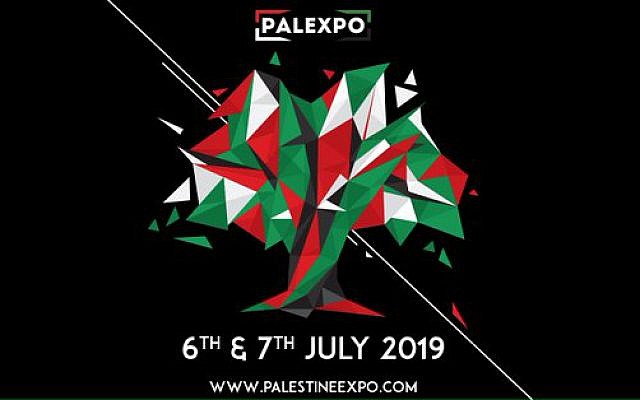 This weekend London’s Olympia will host PalExpo, “the biggest Palestine event in Europe”.

But this is not a forward looking positive event, neither is it an honest assessment of the many barriers to a Palestinian state.

In this dark twilight world everything is Israel’s fault and there is no discussion about how to build a better future for the Palestinians, why bother when it’s easier to just demonise Israel?

Looking at the programme, there is an appealing glimpse at Palestinian culture: dabke dancing, Bedouin coffee and a food court.

“Interactive installations” enable you to “See how you interact with your family during a meal with the Apartheid wall cutting through the dinner table.”

The security barrier doesn’t actually run through the middle of anyone’s house! You could present the genuine problems it creates for farmers etc… without giving such an absurd example, and of course the context that it was built to stop suicide bombings (and succeeded) is completely missing.

You can show your anger by having “a go at knocking down apartheid in a game of BDS bowling.”

Multiple panel session titles refer to “apartheid” or colonialism. Multiple sessions focus on boycott as the way to combat this. There’s an acute sense of paranoia with sessions claiming media bias, that the Prevent counter-terrorism strategy is being used to “erode” Palestine activism, that aid work in Palestine is being attacked by “anti-Palestinian groups”.

Chillingly there is a session called “One State: The Future” (i.e. Israel abolished) with no question mark in the title.

Speakers include Professor Ilan Pappe who thinks that “Zionism offered itself as the solution to antisemitism, but became the main reason for its continued presence.”; Professor Joseph Massad and Labour NEC member Huda Elmi who recently voted to readmit Chris Williamson MP to the party and opposed Labour adopting the IHRA definition of antisemitism.

Nowhere in the programme is there any sense of pluralism and debate, of struggling to engage with the nuance of a deeply complex conflict.

The Israeli Jewish narrative, and the need to build bridges with Israel to create a peaceful solution, is wholly absent – the only Jewish voices are a handful of anti-Zionists from groups like Jewish Voice for Labour, who support BDS, and oppose the IHRA definition.

No alternative strategies are examined other than bash Israel using the failed tactic of BDS, and hope that somehow one of the world’s most dynamic economies will collapse in the face of student unions not stocking Sabra humus.

There is no sense of hope or vision beyond the dystopian objective of One State – unmaking 71 years of Israel and two millennia of Jewish dreams of a homeland.

Where is the mutual recognition that there are two peoples with a home in one small land?

Where is the vision of what a Palestinian state could look like, how to build its institutions and how it could live in harmony with its Israeli neighbours, of the actual things the Palestinians need, rather than the destruction of Israel?

Will this event fire people against Israel? Undoubtedly.