An undeniable fact about the subject of nuclear activities in Islamic Iran is their lies and deceptions in their responses to international society’s concerns. This fact will reduce the chance of success in the recent Iran nuclear deal talk because there is not a clear way or mean to evaluate the Iran’s claim for their disinterest in nuclear bomb.

Many years ago, after the unexpected exposure of their secret nuclear activities, the regime in Tehran decided to deceive the international society via a fatwa – a religious order which has to be followed by other Muslims – by Khamenei (Supreme Leader of Islamic regime of Iran) which was saying that having nuclear bomb is haram (religiously forbidden in Islam). This was a strategy to remove some of the international pressure on Tehran. The fact that Khamenei fatwa was only a trap and a tool just to deceive the western societies, became evident when Fereydoun Abbasi, the previous director of Atomic Energy Organization of Iran confirmed that Mohsen Fakhrizadeh was perusing to design a nuclear military system for Islamic Republic of Iran. 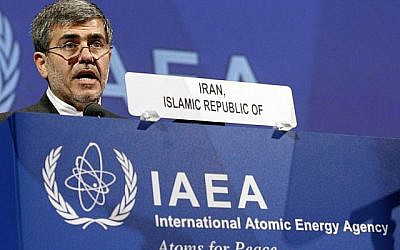 The Origin of The Fake Fatwa

In 2012, Aliakbar Salehi, minister of foreign affairs, showed Khamenei fatwa to the western diplomats to show that developing a nuclear weapon is haram and forbidden in Islam based on that fatwa. At that time, most of the naïve western diplomats were very happy about the whole situation and considered that document as Iran’s being disinterested in the nuclear weapon. Even John Kerry, United Sates secretary of states in Obama administration, said that he was impressed with that fatwa. 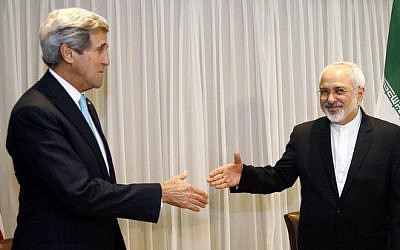 U.S. Secretary of State John Kerry shakes hands with Iranian Foreign Minister Mohammad Javad Zarif before a meeting in Geneva January 14, 2015. Zarif said on Wednesday that his meeting with Kerry was important to see if progress could be made in narrowing differences on his country’s disputed nuclear program. REUTERS/Rick Wilking (SWITZERLAND – Tags: POLITICS)

This fatwa was used as a cover for Iranian military nuclear program and a deceiving tool in negotiations about the nuclear deal. Zarif-Roohani team used it and successfully made an agreement called Joint Comprehensive Plan of Action. Because of this agreement, billions of dollars find their way to Iran, money that never spent on development. Iran supreme leader granted Revolutionary guard, and especially Ghasem Soleimani, access to this capital. As a result, in the following years many Americans have been killed or injured by roadside bombs, and dozens of semi militant terrorist groups have been formed in the region. Many of the Iraqi clan leaders have been bribed and feed by Iranian government for future use in a way that Iran can take Iraq politics under his own control and power. Also, a big part of this money has been spent on developing and producing the ballistic missiles and nuclear weapons; not even one dollar has been spent for elevating the people’s life in Iran.

Why Khamenei’ Fatwa is Deception

This fatwa does not seem to have a solid ground, as all next regime activities are toward producing nuclear weapons. This fact that Iran took some of the necessary steps to make the bomb shows how fake this fatwa is. Some of the Islamic researchers say that there are some loopholes for any previous fatwas. This means just a necessity is enough to cancel the fatwa and it’s much easier to ignore the previous fatwas as it seems. When an ayatollah is not explaining his fatwa thoroughly, which is called development of the fatwa, something is wrong. And you can see that in the official website of Khamenei there is no explanation and no development of this fatwa. We can conclude that this fatwa is a fake claim, and misleading tool to deceive international society, which Islamic Republic considers them as enemy. 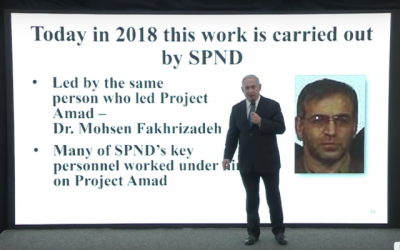 Prime Minister Benjamin Netanyahu stands in front of a picture of Mohsen Fakhrizadeh, who he named as the head of Iran’s nuclear weapons program, April 30, 2018 (YouTube screenshot)

If Fereydoun Abbasi, the previous director of Atomic Energy Organization of Iran, had not revealed that Mohsen Fakhrizadeh was after producing the nuclear weapon, maybe lobbyists of Iranian government in Europe and west would again put their reason on that fake fatwa and try to justify Iran’s atomic activities. Israel has always revealed these facts and every time exposed the secret activities of the regime in Iran, but Fereydoun Abbasi’s words showed that Islamic Republic is in a constant attempt to reach the nuclear weapon and after Trump’s exit of Joint comprehensive Plan of Action, is not even afraid of not covering it. A reasonable human being cannot consider Iran nuclear activity as a peaceful one while you can see the usage of new generation of centrifuges, nuclear enrichment over 60%, and not providing any explanation of uranium particles found in Iran.

They Officially Announced Target is to Eliminating Israel

Iranian leaders explicitly spoke of necessity of “elimination of Israel; they went so far that they have a “count down counter of Israel elimination.”

Recently Fereydoun Abbasi said: “Fakhrizadeh had attempted to design a system of military nuclear weapon.” The dark and dangerous side of his saying is that Islamic Regime is going to share his nuclear weapons with his semi militant groups, called resistant group (brained washed terrorists who does not afraid to target the Iraq prime minister, oil base of Saudi Arabi and even the military bases of the US in the region).

The situation gets more complicated when Mullah’s regime in Iran put elimination of Israel as their official target; this fact can be easily heard from this or that leader now and then. Just recently the Basij news agency quote Abolfazl Shekarchi, the speaker of armed forces in Iran: “I have said many times, we will not withdraw even one millimeter from the elimination of the Israel; and destroying the Quds occupier regime is our biggest cause and it’s the main goal that we pursue.” 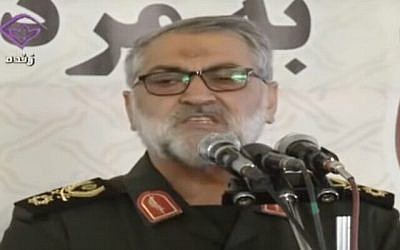 60 and 90 percent of Nuclear Enrichment

If a high ranking militant in Iran exposes the goals of the Islamic Republic, then there would be no need for argument and sufficient reasoning to explain the Islamic Republic intention to reach the nuclear weapon. They have attempted many times to produce and develop deadly weapons, even those times that they were pretending to be loyal to a treaty. At the moment they have 60 percent uranium enrichment which is close to the 90 percent. Hassan Roohani said in the last April “we could do the 60% even in the past, today if we want, we can do the 90% enrichment.” 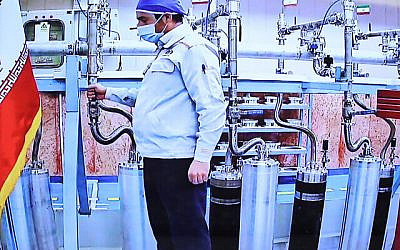 Now this is the question: Can the collective intelligence in the international society accept a regime with a history and background full of cheating, clandestine, and deceiving acts in a newly signed treaty, to keep his promises in another one and stop all his destructive behaviors? This regime never mentioned its activities in Natanz and Frodo, two nuclear bases, until they have been discovered. Then after that they tried to link these facilities to the peaceful activities or to give peace to the mind of the international society by bring a fake fatwa on the table.

A big lie that came out like a rooster’s tail

On the other hand, in a more ridiculous claim, they say that they need uranium for cancer treatment and need the production of radio pharmed drugs for ways to diagnose and treat all types of cancer, but according to the head of the Cancer Department of the Regime’s Ministry of Health, the disease ranked first in Iran and last year, 2020, medical systems for cancer patients announced the preparation of rare chemotherapy drugs for cancer patients are still a big challenge and unfortunately, due to the lack of production of many drugs in Iran, cancer patients face many problems.

This shows that the Islamic Republic’s regime has not even used the nuclear industry for the benefit of the Iranian people, and it is clear where these activities have shifted to. They are trying to get closer to the yellow cake, which is an attempt beyond peaceful affairs altogether, and according to the above, the following points can be cited as an abstract of the Islamic Republic regime’s destructive activities and deception:

* The Persian proverb of the tail of the rooster or the oath of Hazrat e Abbas (Abbasi is one of the holy leaders of Shiite Islam) is said to be about people who deny a clear truth and swear a religious oath to exonerate themselves.

Description: It has been said that once a thief went to a village, it was around noon and the alleys were quiet, after his hard attempt, he could not find anything. He was starting to get frustrated up until he heard a rooster’s crowing from a house. A very large house with a building in the middle of it. The thief thought that the alley is very quiet and the house is very big and until someone finds out about my presence in here, I would pick up the chicken and run away. He grabbed the wall, climbed up and jumped in the house. He saw a few chickens and roosters had left their nests, and were napping in each corner of the house. He chose the biggest rooster and quickly headed for it. He grabbed the rooster and put it under his shirt and quickly tried to jump over the wall and run away from the house, then suddenly the homeowner heard a noise from the porch of the house and saw a man jumped over the wall into the alley. He quickly reached the alley, screaming at the thief, up until some neighbors rushed to help him and were able to eventually catch the thief. The thief, who saw that he had no way to escape, started swearing and crying that I didn’t do anything, and I didn’t steal anything. The thief was unaware that the rooster’s tail had protruded from his shirt. The owner of the house said, I don’t know if I believe the oath of Hazrat Abbas or the tail of the rooster. The thief looked at his open buttons and saw the rooster’s tail coming out of the bottom of his shirt.

About the Author
Hamidreza Zarifinia is an Iranian writer, researcher and journalist in London.
Related Topics
Related Posts
Comments