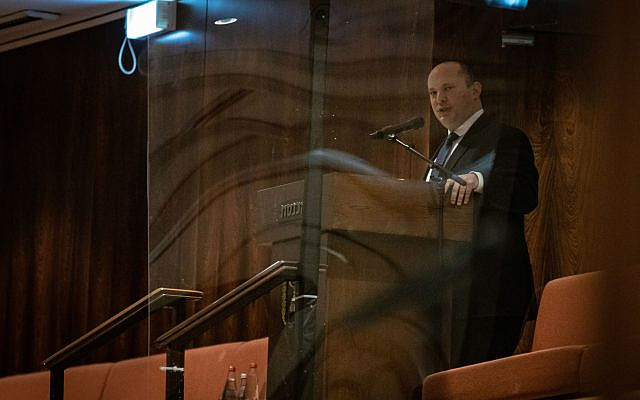 Prime Minister Naftali Bennett is seen in the isolation section during a Knesset plenum session on December 27, 2021. (Noam Revkin Fenton/Flash90)

There couldn’t have been a much gloomier start to a new year than the first 10 days of 2022 in Israel. Everything seems to be unraveling. The Knesset, always a feisty forum, has turned into a brawling arena that accentuates the deep socio-ideological polarization that has characterized the country for quite some time. Palestinian-settler clashes continue to serve as an ongoing reminder of the depth and scope of Arab-Jewish inequalities both within and beyond the Green Line. And the rapid spike of the Omicron variant – coupled with the chaos that it has engendered – has sown growing confusion, anxiety and helplessness.

These phenomena are not unconnected. They are different manifestations of the breakdown of the distinction between the private and the public domains, which is, by all accounts, the bedrock of democratic life. The privacy of the home has been breached: it is now everywhere. Its boundaries have been infringed upon repeatedly, just as its dimensions have expanded and threaten to take over critical public spaces. At the same time, control over the public domain is being forfeited to vying groups, at times purposely.

This process has come to a head with the Bennett-Lapid government decision to relinquish its obligation to manage the pandemic by handing over responsibility to individual citizens. The immediate result is the mayhem of the past few days. Only the reassertion of a new pact between individual citizens, specific communities and a redesigned public sphere can enable the effective handling of the current crisis and stem the downward spiral engulfing the country.

The outbreak of the COVID-19 pandemic posed a special challenge to illiberal democracies with populist trappings such as Israel under Benjamin Netanyahu (or, for that matter, other countries including the United States under Trump, Brazil’s Bolsonaro, or Orban’s Hungary). As Joel Migdal demonstrates in the latest issue of Israel Studies Review, there is a fundamental contradiction between the mainstays of the populism promoted by Netanyahu (fomenting of distrust between different groups through constant recourse to an “us-them” rhetoric; the identification of individuals, groups and institutions – the press, civil society, academics, key civil servants – as disloyal and even enemies; the weakening of key state institutions (government agencies, ministries); the reliance on alternative facts, and the growing politicization of policymaking) and the solidarity and coordination required to deal with the coronavirus pandemic. The extent of the potential damage was offset somewhat by Netanyahu’s ability to effectively carry out the one thing that populist leaders could do on their own: the procurement and dispersal of vaccines once they became available. But by then, the disruption of democratic trappings had become endemic.

For many Israelis, their houses are no longer homes (in Hebrew, the term bayit is used for both). The sociologist Eva Illouz points out in an essay just published in Telem that during the various cycles of the pandemic in Israel, Israeli dwellings have served as offices, schools, kindergartens and even hospitals while seemingly continuing to function as homes. Within their confines new tensions have arisen, additional tasks have developed, growing violence has occurred and innovative communication techniques have been employed. In many respects, the intrusive effects of these external influences – often accompanied by sophisticated electronic surveillance techniques, have made what were in the past primarily personal safe havens into transparent reflections of some of the more problematic currents in the public domain.

At the same time, domestic elements are progressively surfacing in the most public of places. The Knesset, as the summoning of MK Shirly Pinto only six days after she gave birth for a vote, temporarily turned into a creche. It has also housed isolated parliamentarians (including the Prime Minister) when their presence was required in the plenum. Anyone following the news already recognizes the furnishings in the homes of top officials and policy-makers – who themselves have found it more than difficult to abide by their own regulations (from Netanyahu and former President Rivlin to Deputy Foreign Minister Idan Roll).

This intertwining between the private and the public was formalized with the appearance of the Omicron variant. Following several efforts by the government to slow down the importation of the new COVID mutation and constrain its spread through a variety of temporary (and largely ineffective) measures, last week it essentially privatized its approach in what now appears to be a rather futile effort to keep the economy open.

With testing mostly in the hands of individuals with varying capacities to access or procure antigen testing kits, people are either spending endless hours in long queues waiting to be vetted or simply ignoring directives that they can neither understand nor fulfill. The result is that some are doing almost everything but showing up at their workplace and others are going to their jobs contagious and untested. In either eventuality, the human and economic security of Israelis is at risk – as is the course of its polity.

This situation cannot continue for much longer: it only magnifies uncertainty and exacerbates inequalities. Two options exist. The first, actively promoted by the now-head of the opposition Netanyahu and his allies is gaining traction: the disbanding of the present coalition and his reinstatement as a “strong leader” able to instill confidence in his capacity to control events. The just-released Israel Democracy Index shows that a full 56% of respondents in a national sample favor such an alternative.

The second, admittedly more complicated, is also the more heavily favored: the reconstruction of the sense of “Israeliness” around its most binding feature, respect for the rule of Israeli law (93% of Jews and 84% of Arab citizens of the country). Whatever option is chosen will, therefore, garner a majority. The question is which is set in motion now.

This government realistically has only one choice: to embark on the long and difficult road of reconstituting the Israeli domestic terrain. The most immediate task is to regain control over the management of the pandemic. This means imposing restrictions on the non-vaccinated and facilitating testing possibilities on a massive scale. It also entails putting in place a mechanism for compensating citizens for losses incurred during this wave – just as was done in previous cycles. The combination of these moves will reinstate a semblance of calm and predictability in what is now a near-anarchic situation.

Once a modicum of order is restored (given the apparently brief shelf-life of Omicron, within six weeks), attention can then be directed to reinforcing the building blocks of a new social pact based on spelling out a 21st-century update of guiding civic norms. The establishment and implementation of these principles is the obligation of any government. It comes together with a complementary list of civic responsibilities. Such a revamping is not only long overdue, it is also the cornerstone upon which it becomes possible to build mutual respect (including the entrenchment of the right to criticize and to oppose existing policies), renewed trust that all actors will abide by the rules of the game, and, ultimately, an understanding that all this depends on the centrality of restraint in the methods used to access and maintain power. This is the stuff that makes for reciprocal confidence in functioning, diverse, democracies.

By any measure, this is a tall order – especially in a period of intense political vulnerability during which the foundations of the existing order are constantly being assailed. But under the circumstances, it is the path that some faltering democracies have already broached and that Israel should pursue if it stands any chance of making those long-overdue adjustments to its rapidly changing domestic and external environment. The future of all its citizens depends on its capacity to do so. 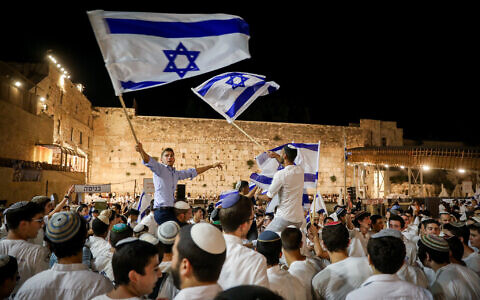 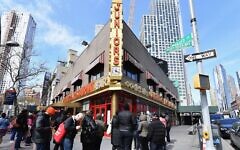