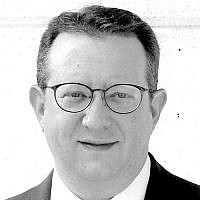 The Blogs
Ari Perl
Apply for a Blog
Please note that the posts on The Blogs are contributed by third parties. The opinions, facts and any media content in them are presented solely by the authors, and neither The Times of Israel nor its partners assume any responsibility for them. Please contact us in case of abuse. In case of abuse,
Report this post.

I was admittedly caught off guard recently, when a friend pointed out that I am probably the first — and, likely, only — rabbinic organ donation professional. In my role as Vice President for Jewish Community Engagement at LiveOnNY, the nonprofit organization tasked with overseeing deceased organ donation in the greater New York City area, I provide pastoral and rabbinic support to Jewish families of patients with grave prognosis while presenting them with the opportunity to save lives through organ donation, and I educate NYC-area Jewish communities about organ donation through the lenses of Jewish thought and law.

All Jews agree that Pikuach Nefesh, saving life, is a supreme Jewish value. As a result, Jews across the denominational spectrum take great pride in the leadership roles our community plays in modernizing emergency response and globalizing humanitarian relief. Sacred as the sabbath day may be, the sight of a Hatzalah volunteer EMT speaking into a 2-way radio is instinctively understood as a noble expression of pikuach nefesh and not an act of chillul shabbat (desecration of the sabbath).

Yet, when it comes to Judaism and organ donation, instead of the discussion starting with the supreme importance of pikuach nefesh, it almost always begins with a list of religious obstacles that potentially stand in the way of donation. I’ve been an advocate of Jewish organ donation for more than 20 years. But after being fully immersed in both the halakhic and medical aspects of organ donation over the past 18 months, I’ve also become aware of just how poorly informed our Jewish community is about this matter of life and death.

Every 18 hours a New Yorker dies waiting for a lifesaving transplant because not enough people say yes to donation. When consent for donation is provided, the recovered organs are immediately transplanted into the sickest patients on the waiting list maintained by the United Network for Organ Sharing (UNOS). This combination of dire need and immediate impact make organ donation a paradigm of pikuach nefesh. Manifestations of kavod hameit (honoring the deceased) such as expedient burial and body integrity are very important Jewish values; but just as Shabbat yields to the EMT, so too kavod hameit poses no obstacle to organ donation.

But even though a single donor can save up to 8 lives — a sublime act of pikuach nefesh — very few Jews donate organs after death. In the past, reports of low donation rates in the American Jewish community have been entirely anecdotal because religious data is not collected by UNOS. However, as part of our Jewish Community Engagement initiative, LiveOnNY data now tells us exactly how many Jews in New York — the largest Jewish community outside of Israel — consent to donation. This data also includes denominational affiliations and the reasons why Jews decline to donate.

The data we’ve collected is disconcerting.  On one hand, it confirms what has long been suspected: Jews generally decline to donate organs after death. While the national consent rate in the U.S. is around 75%, NYC-area Jews agree to donation only 23% of the time. But there is also a surprising twist: the data shows that the affiliation of Jews who decline spans the ideological spectrum- Modern Orthodox, Conservative, Reform, and secular- thereby debunking the myth that the Jewish consent rate is suppressed by the ultra-Orthodox community’s categorical rejection of deceased donation. What makes the low consent rate even more confounding is that many Modern Orthodox rabbis, and almost ALL Conservative and Reform rabbis, express unequivocal support of deceased organ donation.

The Jewish reluctance to donate organs after death is nothing short of a communal crisis which results in lives, both Jewish and gentile, being lost. Based on the average number of organs transplanted per donor, Jewish declines in 2019 alone translate into approximately 90 lives that could have been saved, but weren’t. As a community, we are collectively guilty of the biblical injunction “Do not stand idly by the blood of your fellow“ (Lev. 19:16).

Each movement must identify realistic opportunities for addressing this communal crisis. Ultra-Orthodox rabbinic authorities categorically reject brain death on religious grounds.  In NY & NJ, state law requires hospitals to accommodate this religious objection to brain death, effectively eliminating the primary pathway to deceased donation.  At the same time, the ultra-Orthodox community, due largely to the amazing efforts of Renewal, continues to donate more live-donor kidneys than any other group in the U.S.  However, because the ultra-Orthodox community continues to receive life-saving organs transplanted from deceased donors outside the Jewish community, it has a moral obligation to expand the scope of its live-donation recipients to include critically ill patients outside of the Jewish community as well.

Responsibility for increasing the Jewish deceased donation consent rate lies with the Modern Orthodox, Conservative & Reform communities, whose respective core principles should advocate strongly in favor of organ donation. Modern Orthodoxy’s commitment to synthesizing Jewish Law with new developments in science and medicine should galvanize that community to follow the lead of numerous Religious Zionist poskim, rashei yeshiva and Israel’s Chief Rabbinate in embracing brain death as halakhically valid and organ donation as a great mitzvah.

Both Conservative & Reform Judaism have no principled objection to brain death and recognize it as valid. The challenge for the liberal movements is to extend their commitment to Tikkun Olam and social responsibility as principles that shape not only Jewish living, but end-of-life decisions as well. Doing so will elevate organ donation to its rightful place as a sacred religious obligation and noble humanitarian act.

The goal of LiveOnNY’s new Jewish Community Engagement initiative is certainly an ambitious one, and I look forward to partnering with rabbis, doctors and community leaders across the spectrum of our community in this exciting and sacred work. Together, we can save thousands of lives while fulfilling the biblical mandate: uvacharta vachayim- “And you shall choose life!” (Deut. 30:19)

Rabbi Ari Perl can be reached at aperl@liveonny.org.

About the Author
Rabbi Ari Perl is Vice President for Multicultural Engagement at LiveOnNY. During his 20 year career as a synagogue rabbi, he also served on the Rabbinical Council of America’s Executive Committee, as President of the Rabbinical Association of Greater Dallas, and as a board member of Dallas’ Jewish Federation. Rabbi Perl received his semicha (ordination) and an MA (Jewish History) from Yeshiva University, and an MBA in non-profit management from Touro University.
Related Topics
Related Posts
Comments