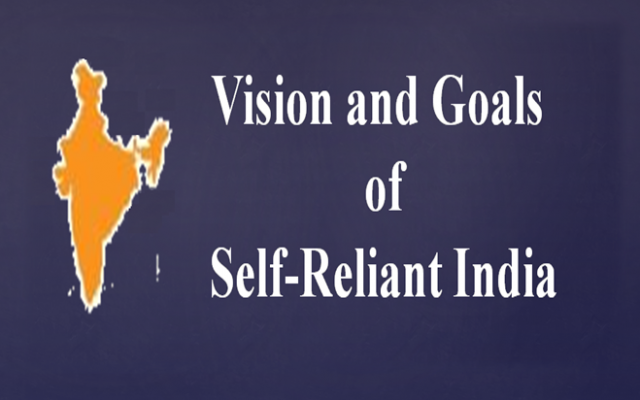 Recalling the fightback spirit in the corona battling world is crucial and when the country of 1.3 billion people takes the courageous call of Self Reliance that boosts the morale of other aspiring nations too. Prime Minister Narendra Modi’s ‘Aatmanirbhar Bharat’ (Self-reliant India) call shattered all those speculations too which claimed that India is putting all its energy on wooing the businesses leaving China. In the larger frame of India’s priorities, neither rising China was a concern nor can its dwindling image be an opportunity. Being a responsible member of the global community, India’s focus at this stage is on ensuring how its perspectives, philosophy, and approach can contribute to shaping the present uncertain environment in a positive direction.

A few days back, the world has witnessed a snapshot of what would be the character of a Self-Reliant India will look like when despite having a huge demand at home, India decided to export COVID-19 medicines and other essentials to every single nation which raised a demand for that. In the last two months, India supplied Hydroxychloroquine and paracetamol to over 120 countries and more than 40 of them received these medicines as a grant from India, everyone praised India for reflecting an exemplary collaborative spirit in the middle of such a crucial time.

Corona crisis has forced every country to re-evaluate its current dependency and to make fair calculations about their local potential. The responsibility to overcome this BIG pause, which disturbed the trajectory of the global growth, lies equally to every nation’s shoulder and India being the largest democracy of the world, consider the weight of this responsibility more sincerely than others. India’s success in the self-reliance push, in this crucial moment of history and its experiences of this phase, can provide a template of response for the future economic challenges.

One of the interesting traditions of democracy is that the critics and opposition always keep their script ready well in advance before any major announcement of the government. So the first reaction of Indian opposition on PM Modi’s self-reliance speech was that this call is nothing but a “repackaging of Make in India” initiative. There can be some fact in that claim because in an outer view almost all major initiatives of the Modi government taken in the last six years, from Make in India to Digital India to Skill India to Mudra Loans to Startup India and Stand-up India, etc. are somewhere aligned with the larger Self-Reliance goals of the country. But anyone who has tracked Transforming India’s journey closely must be aware that there was never a moment in the entire tenure of PM Modi when the government had to do a ‘repackaging’ of its own moves, as today there is no dearth of new ideas and fresh thinking in the functioning of the system.

The foundation of a Self-Reliant India is based on the five pillars, which as shared by PM Modi are: Economy, Infrastructure, System or Technology-driven systems, Demographic dividend, and Demand. To run the Self-Reliant India campaign on a mission mode, PM Modi has announced a 20 lakh crore (approx $265 billion) package, which is close to 10% of the country’s GDP. The announcement of this package which exceeded everyone’s expectations has brought new energy in the entire business community, and the spirit of small businesses and the MSME sector has recharged again.

If one has to understand how the famous saying “turning crisis into opportunity” looks like in the real world and how this approach can be implemented on such a massive scale then observing India’s present approach could be a good option. Before the corona crisis Self Reliance was a dream which India was pursuing at a moderate pace but post corona this will be a mandate to the government machinery and a key responsibility of every single citizen.

In a big push to MSME sector, the Indian government has revised the MSME definition so that maximum MSMEs can be covered under the government benefits, provided access to collateral-free automatic loans to small businesses and MSMEs, and global tenders of up to 200 crores have been disallowed in the government procurement, besides that several other policy moves/reforms related to Ease of Doing Business, market access, debt finance, and liquidity have been rolled out too. In key sectors of the economy like coal, minerals, defense, aviation, space, and atomic energy several long demanded policy reforms have been introduced. Some of the notable initiatives launched under Aatmanirbhar Bharat (Self-Reliant India) package are new public sector enterprise policy, the introduction of commercial licensing in the coal sector, enhancement in the FDI limit in defense sector (from 49% to 74%), and opening up of private investment in space activities, which includes enabling private players to work in collaboration with the department of space in specific projects.

One of the key goals of Self-Reliant India will be to combine the potential of public and private sectors and encouraging them to work together with a common national sector spirit.

We have seen that the media of every democratic country gives a lot of weight to the idea of political democracy, and the ‘right to vote’ is often propagated as the most crucial right of an individual. But is that alone is sufficient? The ideological guide of the current ruling party of India Pandit Deendayal Upadhyaya formulated the concept of Economic Democracy and he wrote that “just as ‘vote to everyone’ is the criterion of the political democracy, the same way ‘work to everyone’ is the criterion of the economic democracy’” and “political democracy cannot thrive without economic democracy.” To ensure economic democracy, a country with the size of India will have to develop a more vibrant self-employed sector and will have to boost its indigenous capabilities, and entrepreneurial potential on a different scale, which needed intense reforms in the current structure, so when PM Modi gave a speech on ‘Aatmanirbhar Bharat’ his address was more directed toward the system than the citizens.

In the post-COVID grand reconstruction phase, India has an option to offer many such non-conventional human-centric development perspectives to the world and it seems that it has started walking in that direction.

Now the question comes how India’s traditional trade partners should see this self-reliance push? Those who are observing the patterns of India’s development journey and collaborative approach from a long time, during which they were an active partner in that too, must agree with the fact that India can never advocate a self-centric approach; building and cherishing strong trade partnership with the larger vision of global good is a key aspect of its approach. A self-reliant strong India can offer a lot to the world and as PM Modi rightly put “the culture and tradition of India speak of self-reliance and the soul is Vasudhaiva Kutumbakam (the world is one family).”