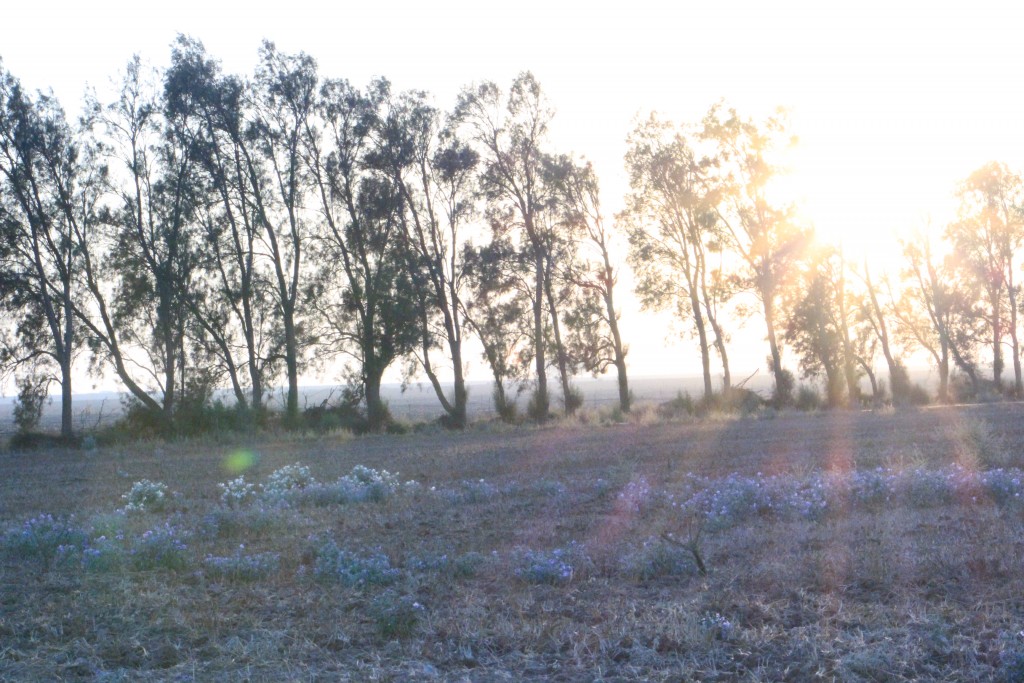 Yesterday evening, I was on my own, in my kibbutz, which nestles in the western Negev of Israel, on the border with the Gaza Strip. No kids around to cook for last night. No obligations to anyone other than myself. So I decided to take my camera with me to dinner in our communal dining room, and from there, to hop out to the fields in time to catch the final rays of the week, as the sun set over our July-dry fields — still beautiful despite being smack in the middle of the long, parched summer. These fields will not see rain until October, at best– more likely: November.

As I was driving, I remembered how these very same fields had been battlefields just three summers ago. They were dry then, too, but all of the tanks and other military vehicles driving through them, churned them into a fine, dusty powder. (During that summer, when provided the rare opportunity to drive north of Ashkelon, I could easily tell which cars were coming from the war-torn south by the film of dust which they wore as a badge.)

I also thought about what was happening on the other side of those fields. The trees in this photo are my skyline, but if you look really carefully, you can see the true horizon — a faint line. There, through the trees and less than two kilometers away, is the Gaza Strip. So near, geographically, yet so far conceptually. The reality of the people who live beyond that line, is outside of the realm of what any of us can conceive. Official UN estimates say that Gaza will be uninhabitable by 2020. These estimates were first published in 2015. People: that’s now only three years away. But the truth is: Gaza is already uninhabitable — totally — by your and my standards of what we consider habitable, logical, sane. The news of a Red-Dead pipeline agreement has people excited here, and yes, it’s a biggie, and it’s going to help all those who live in this region, including the Gazans. But it’s going to take 4-5 years to get off the ground. And we don’t have time for that.

This is just a reminder, as much to myself as to anyone reading this, that, while I live in my comfortable home, with water aplenty, AC whenever I feel the need, my car a-ready to take me wherever, whenever I want; my computer, my charged cellphone, even the fact that I am toying with the idea of going abroad for a few days while my house is being renovated… shall I go on? In short: a reminder to myself not to take for granted everything in my life which I usually do not think twice about. Because, while all this is my reality…

On the other side of this horizon, a Gazan friend (who has asked to remain nameless) wrote this: “Neither the freezing weather nor the boiling heat made Fatah or Hamas reach a reconciliation that would make Gazans’ life better. Even the death of children didn’t move them. My child went to hospital for four days because of the heat and unclean water.”

Their leaders aren’t doing nearly enough. Neither are ours. We all can do better. Gidon Bromberg is quoted in the article referenced. above: “If more water is not provided to Gaza, there could be a potential outbreak of pandemic disease, which even Prime Minister Netanyahu has said won’t stop at the border.” Or, in other words: the real and present danger of a pandemic outbreak looms on my doorstep. Literally.

We all need to wake up and smell the danger.