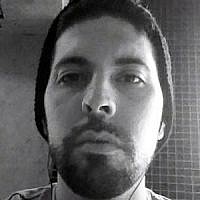 The Blogs
Daniel J. Roth
Apply for a Blog
Advertisement
Please note that the posts on The Blogs are contributed by third parties. The opinions, facts and any media content in them are presented solely by the authors, and neither The Times of Israel nor its partners assume any responsibility for them. Please contact us in case of abuse. In case of abuse,
Report this post.

It’s a summer of madness once again in Israel, a twisted season which has trapped the particles of exploding missiles within the sweat of our furrowed brows – a madness one fears derived from the prospect that our current righteous battle will accomplish nothing aside from ceasing Hamas’ lunatic effort in sending rockets into our sovereign lands. And the question remains: Is that enough for you? Do you not ask yourself “what’s the long term strategy?” What’s the point? Is there one? Or is it merely an effort to maintain the status quo?

Listen, before all you reactionaries start losing your s#%t and start defending the virtue of Israel’s campaign against naked aggression and the right to defend itself-(WHICH I TOTTALLY AGREE WITH!!!)- lets take a moment to reflect past the immediate, visceral emotions of the situation and understand it in a more contextualized perspective.

This melancholy merry-go-round of bloodletting enmity serves a purpose beyond its ostensible contours. Hamas maintains its legitimacy, power, and most importantly, Its identity within the slowly decaying enclave of the Gaza Strip as a resistance movement; and according to Alon Ben-Meir, senior fellow at NYU’s center for Global Affairs, ” The sad irony is that as long as Hamas openly seeks and promotes the destruction of Israel and violently resists the blockade, it provides Israel with the excuse and rationale it needs to maintain the blockade and, by extension, the occupation of the West Bank. This explains why the Netanyahu government does not seek the destruction of Hamas and instead chooses to “manage” its militancy by degrading every few years its military capability and destroying much of its infrastructure to keep it at bay.”

Each side, with its visceral hatred for one another, nevertheless fulfills each other’s political aims that maintains or bolsters the popularity amongst its respective peoples. In Gaza, the people have a voice for their discontent, who “are prisoners in their own land, encircled by Israel from the land, air and sea, and policed by Hamas. The ghastly conditions under which they live are becoming ever more unbearable and hapless every time Hamas challenges Israel.” In Israel, Bibi enjoys the “rally around the flag” effect afforded by the Israeli public that straightens support for his right wing coalition. There is no information on Israeli support for the current operation, but if 2012 serves any indication, according to Haaretz, “90% of Jews” supported Operation Pillar of Defense. This is not to imply that Prime Minister Netanyahu pre-meditated operation Protective Edge for political purposes, but it certainly doesn’t hurt his popularity.

And in all the wars, intifadas, battles and skirmishes we engage in, the only thing that ever seems to get better is the weapons we use to kill one another with. One will argue that all Hamas terrorist must be neutralized if we are ever to achieve stability.( Well shoot, I wish the IDF thought of that.) Despite international condemnation and diplomatic fallout, the full scale eradication of Hamas will only serve as an opportunity to give more extreme elements in Gaza to take over, like Islamic Jihad or the Al-Quds Brigade. Abu Mazan and his Fatah party in Gaza are seen as weak and/or capitulators for working with the Israeli government and therefore has little credibility within the strip.

What needs to happen is a cultural shift in Gaza which will change the ethos within the area, fostering a more conciliatory environment of cooperation. Convincing Hamas this is in their best interest is another question.

About the Author
Originally from Los Angeles, California, Daniel currently resides in the heart of Tel Aviv. After being in tattoo industry most of his adult life, he made the decision to come on Aliyah, complete his education, and seek a deeper understanding of the world around him.
Related Topics
Related Posts
Comments