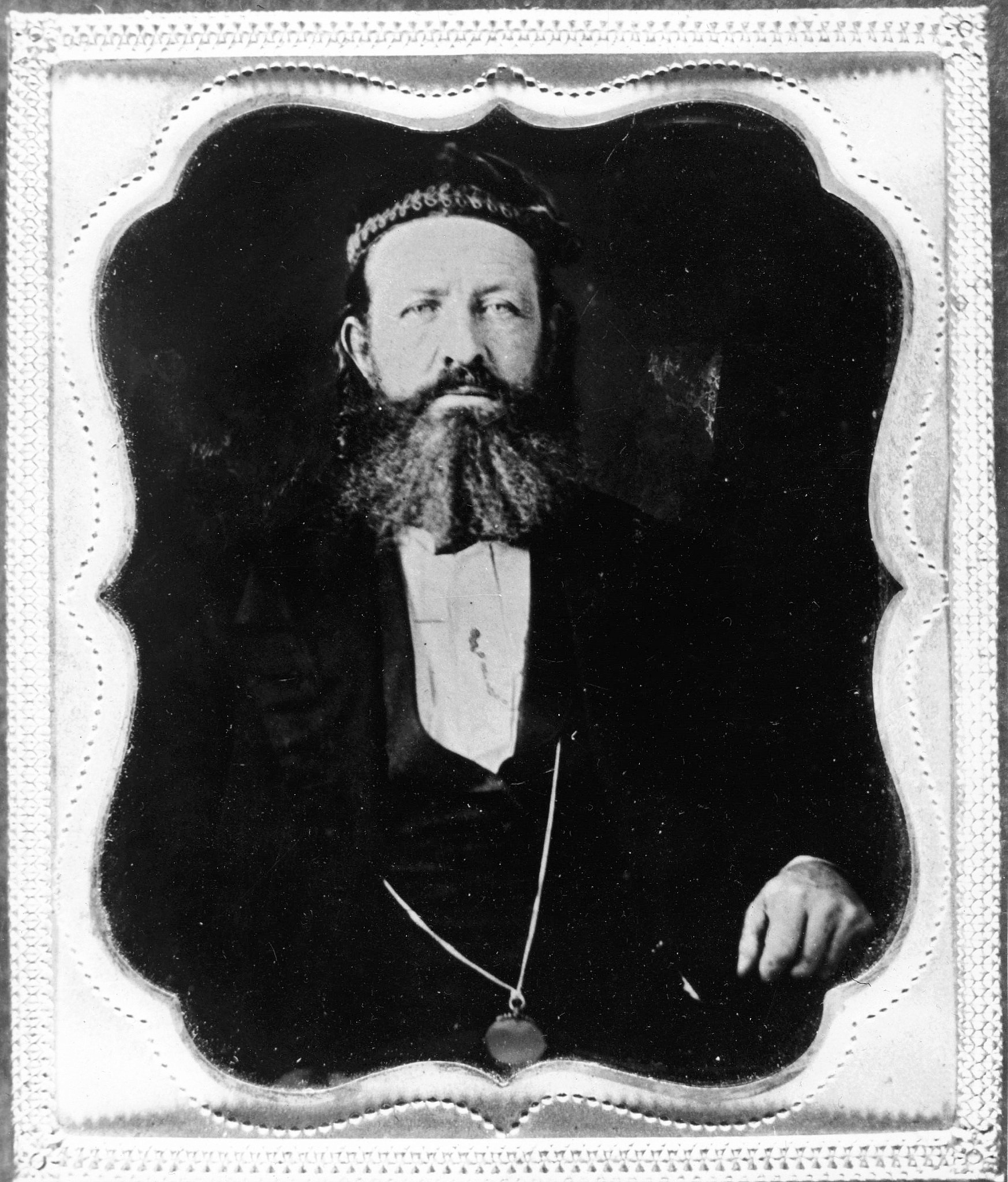 Was his choice a blessing or the curse of insanity?

May 15, 1849, a Philadelphia court had to decide. It was a case tainted by anti-Semitism that rocked American Freedom of Religion and Speech. It became a fundamental step to present-day freedoms begun in the fires of the American Revolution and the idealism defined in the Bill of Rights.

Cresson’s earthly remains are buried on the Mt. of Olives. His disintegrated grave and fragmented tombstone virtually lost in the sea of forgotten stories.

June 2021, Cresson’s resting place was restored to dignity by the Jewish American Society for Historic Preservation.

Warder Cresson was born in Philadelphia, Pa. in 1798. He was raised as a Quaker, married, and became a successful farmer.

According to some, Cresson’s spirit was blessed. According to others, he was cursed with a restless religious soul that continually sought to encounter God directly. His desire was to experience the Kingdom of Heaven as a living, present reality. His deep unfulfilled religious yearning brought him into conflict with his Quaker community and roots. He sought other paths to God. One path he trod, crossed with Rabbi Isaac Leeser of Philadelphia. Leeser spoke of a path Cresson never understood much about before.

No place on earth could be nearer to God and the Second Coming than Jerusalem, Cresson reasoned.

Cresson used his connections. President John Tyler approved his appointment, May 17, 1844, as the first US Consul to Jerusalem, provided he received no compensation from the US  Cresson eagerly agreed. He said goodbye to his wife, leaving her with his power of attorney and left for the Holy Land.  After he set sail, Secretary of State John C. Calhoun, June 22, 1844, rescinded his appointment. Warder Cresson was accused of being insane.

Cresson had proclaimed the imminence of the Second Coming. He preached in the streets, outside of churches. He called for all to hear the message, and the warnings of God.

If street preaching is an outward sign of insanity, Solomon, Ezra, Nehemiah, Jeremiah, Jonah, and Isiah might be accused of insanity too.

Cresson remained in Jerusalem for nearly three years searching for his own direct encounter with God and the Kingdom on Earth. March 1848, Cresson was circumcised and became an Orthodox Jew. He chose the name Michael Boaz Israel ben Abraham; Michael, one of the four archangels standing around the throne of God. Boaz, the great grandfather of King David and the husband of the Moabite convert Ruth, who said, “Your people shall be my people, and your God my God”.

While he was gone, Elizabeth Townsend Cresson had her own long religious journey eventually converting to Episcopalianism. She could not and would not be reconciled to Warder Cresson’s path to God. She despised his chosen belief. She sued to declare him insane.

David Paul Brown, her attorney, declared, “that she had to deny either her Savior or her Husband.”

“I, therefore, Warder Cresson, had to deny either the One Only God or my Wife” Cresson wrote later.

A jury of six men were chosen. “I was consequently condemned, without my being permitted to bring forward even their own letters and the letters of several ministers, as full and complete testimony that they thought me perfectly sane”.

For the next three years, Warder Cresson struggled to bring his case to a higher court. The case was finally reheard in Philadelphia, “The friends and family of Warder Cresson, Esq., late Consul at Jerusalem, are applying for a writ of de lunatico to shut him out of the possession of part of his property, on the ground of being a lunatic for embracing Judaism.” New York Times.

Cresson’s attorney put the context succinctly to Judge King “if Mr. Cresson had been charged with lunacy for joining any other religious society than the Jews, the case would have been laughed and hooted out of the court.”

The trial lasted six long days. When the jury of 12 Christian men returned their verdict – Warder Cresson was ruled sane. The Philadelphia Herald reported on the trial’s verdict – “This prosecution was an attempt to coerce conscience, through the horrors of a Lunatic Asylum, and deprive a man of his civil and religious liberty and throw an imputation on the Jewish Faith; but the jury, with a sagacity and magnanimity (for they were all Christians) that does them high honor, vindicated the truth of American Rights, and of our Republican Constitution.”

He had vindicated two principles of the Bill of Rights – Freedom of Religion and Speech.

Cresson concluded his affairs in Philadelphia. He divorced his wife and returned to Jerusalem.

In Jerusalem, he remarried and became a respected member of the Sephardic Community.

Cresson became an early Zionist, attempting to establish a Zionist agricultural community in Jerusalem’s Emek Rephaim. He failed for lack of funds. His wife had taken most of what he had.

Cresson died October 17, 1860. He was buried on the Mount of Olives, or, as it is sometimes known, the Mountain of the Messiah.

A spate of articles has come out about Cresson prompting me to look into the condition of his gravesite.  I knew the stone for Cresson was found in 2013 and not much more was done.

Through my Society, the Jewish American Society for Historic Preservation, I do unusual projects such as gravesite preservations and restoration. Recently, I restored Shmuel Cohen’s shamefully deteriorated grave in Rishon LeZion and Asher Itzkovitz’s. Cohen was the composer of the music to the Hatikvah.  Itzkovitz was a survivor of Auschwitz murdered in 1947 when he walked down the wrong street in the Old City of Jerusalem and came too close to the Temple Mount in the eyes of fanatics. Asher was only 20.

I asked my friend, noted Jerusalem sculptor Sam Philipe, to look into the condition of his gravesite. 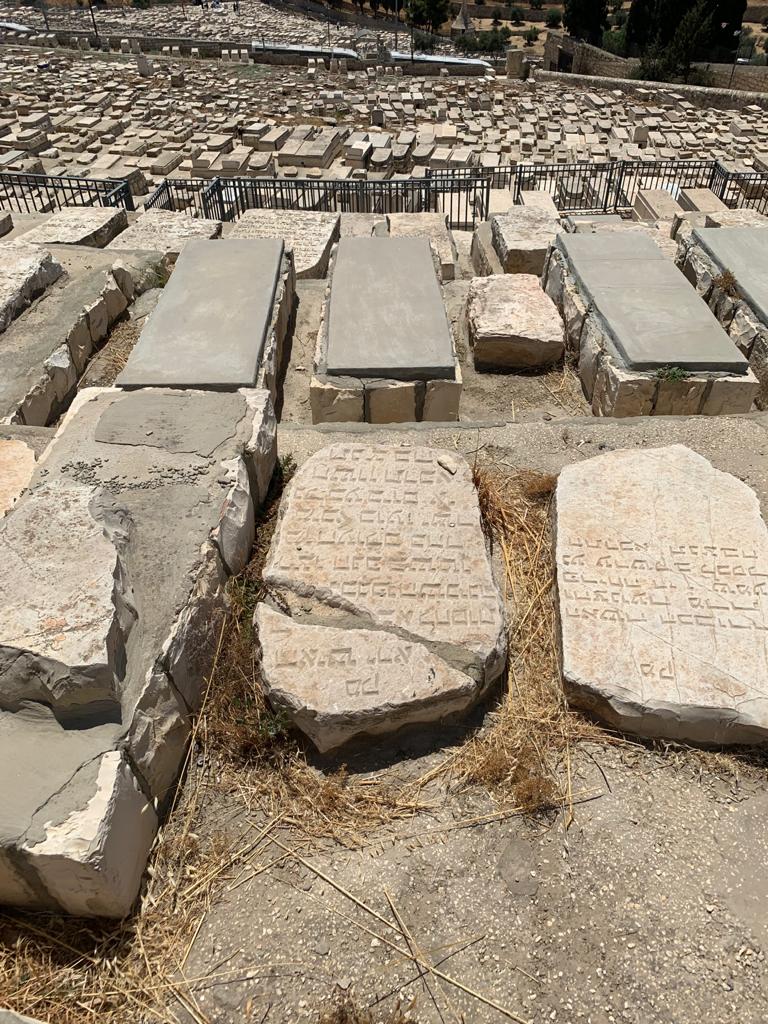 Cresson’s extraordinary role in the world’s first effort to create a multi-ethnic, multi-racial, multi-cultural society where Freedom of Religion and Speech are cornerstones, the American experiment, was too significant to ignore. His resting place could not remain just another disintegrated grave on the Mt. of Olives.

JASHP preserved it for another 160 years. 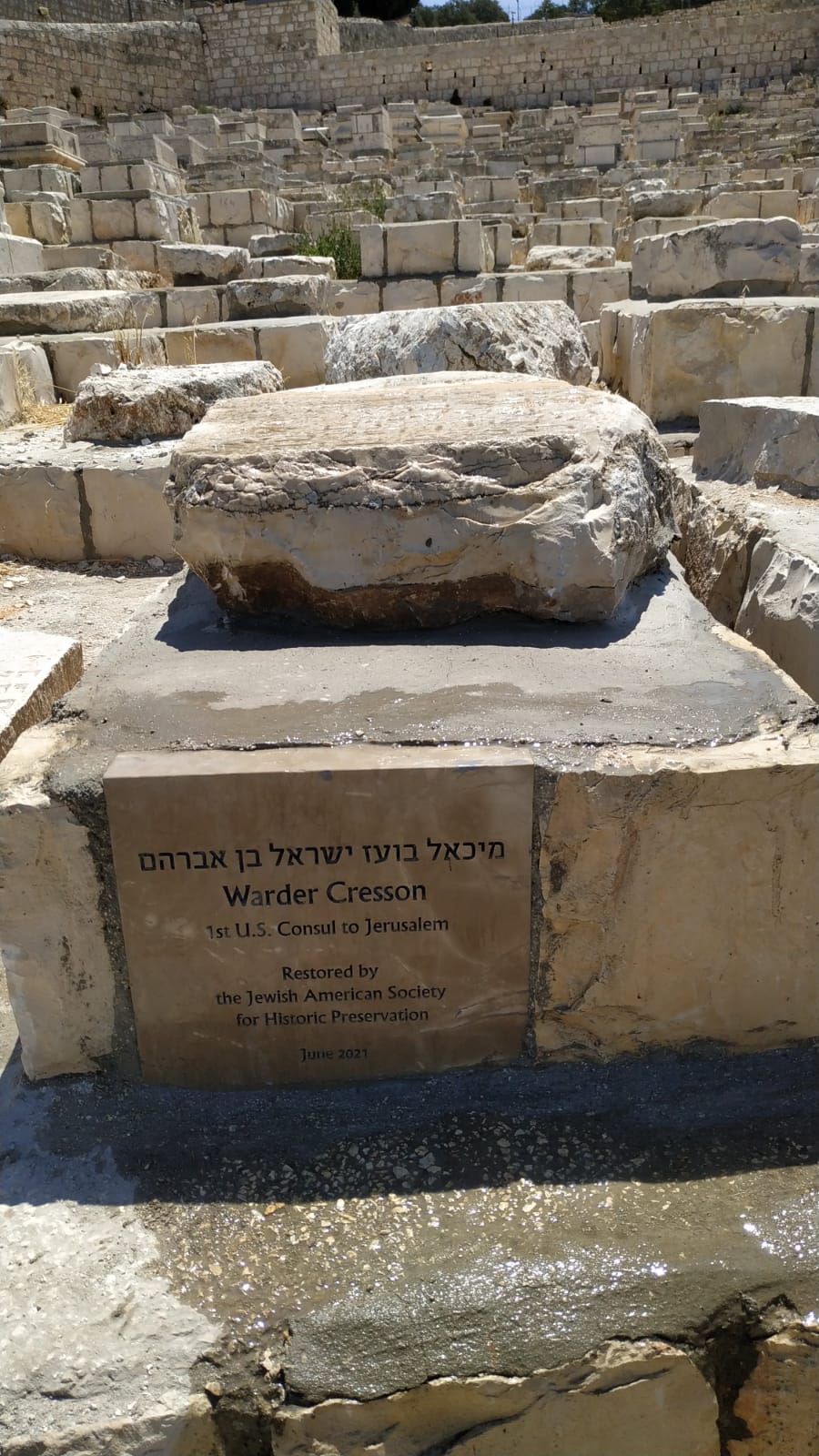 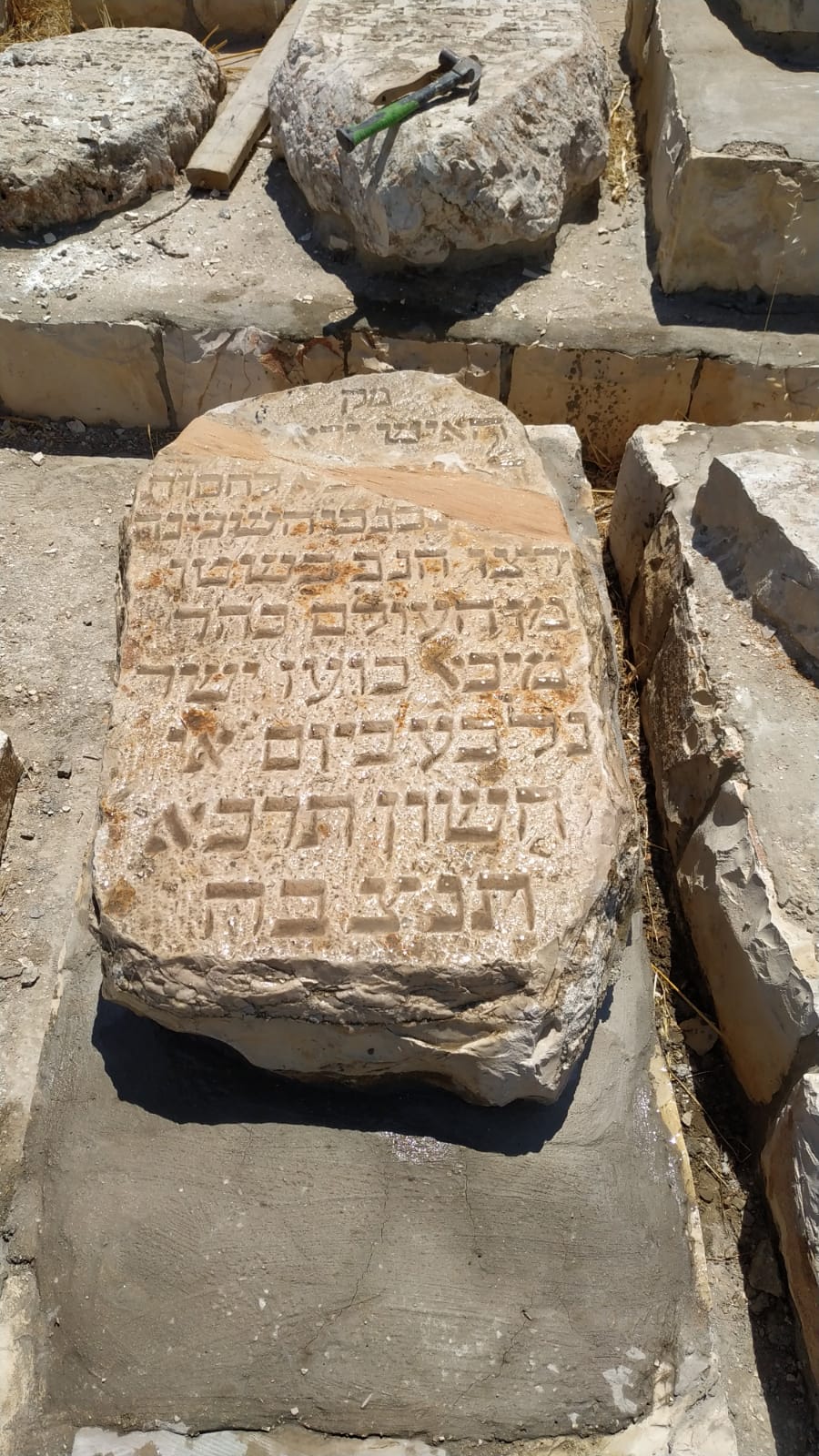 A man (who) fears God

Came to be protected under the wings of

The deceased (de) in good name (gn) from the world, honorable

Was taken to his temple (cemetery)

May his soul (will) be wrapped with the wrappings of life

About the Author
Jerry is the president and founder of the Jewish American Society for Historic Preservation, www.JASHP.org. He is the son of Survivors of Buchenwald and Bergen Belsen. He is a former Yeshivah student and served with the IDF in the Sinai. He is the author of over 100 articles in publications ranging from the Jerusalem Post to the Prairie Connection to the San Diego Jewish World. Jerry is frequently interviewed on T.V. and Radio about the American Jewish experience. The Jewish American Society for Historic Preservation has completed projects in 40 US. States and in 5 countries. Over 7,000,000 people annually benefit from one of JASHP's efforts. JASHP has completed eleven projects in Israel. In 2021, 2 more projects are nearing completion in Israel, one in Guatemala - the Anne Frank Children's Human Rights Memorial, five historical memory projects in the United Kingdom, and four in the U.S. Jerusalem Day, 2021, JASHP completed the first-ever historic memorial to 850,000 Jews driven from Arab lands and Iran with the birth of the Jewish State.
Related Topics
Related Posts
Comments
Advertisement 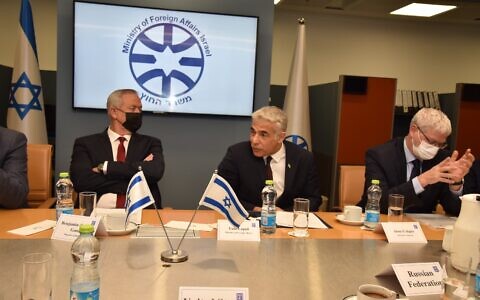