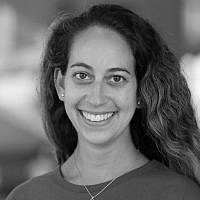 The Blogs
Sarah Vorsanger
Apply for a Blog
Advertisement
Please note that the posts on The Blogs are contributed by third parties. The opinions, facts and any media content in them are presented solely by the authors, and neither The Times of Israel nor its partners assume any responsibility for them. Please contact us in case of abuse. In case of abuse,
Report this post.

Pollution sources originating from the West Bank remain a serious threat to the ecology of the Alexander Stream. Olive oil production and demand are expected to rise annually, exacerbating an already fragile ecological situation. An ongoing project to build a new Israeli wastewater treatment plant at an estimated budget of 300M NIS offers the possibility of full stream restoration within the next decade.

Despite years of cleanup and restoration efforts, the Alexander Stream remains heavily contaminated and polluted from an estimated 70 different sources due to a laxity in waste regulations and enforcement from the Palestinian Authority (PA). Lacking any sort of environmental and economic incentives, conservation of the stream remains a low priority for the PA and its residents. Ariel Oelsner, Head of Science to Policy at the research team for the Alexander Estuary at the School of Marine Sciences of the Ruppin Academic Center says that the Alexander Stream “essentially acts as a sewage canal for the water originating in the Palestinian territories.”

The Nablus Stream – the largest tributary of the Alexander Stream – carries waste, raw sewage, and pollution generated between the West Bank towns of Nablus and Tulkarem and flows into Israel. There, it meets the Alexander Stream, before eventually emptying into the Mediterranean Sea near the village of Mikhmoret.

Olive Oil as a Pollution Source

Particularly damaging are the effects of Palestinian olive oil processing plants along the Nablus Stream. The effects are more pronounced during the olive harvest, which occurs during late October and early November every year. Akar, a thick dark substance which appears at the bottom of unfiltered olive oil, is produced during the processing of the olives. Through complex chemical processes, the high phenolic content of the Akar turns the contaminated water into a lethal tincture, exacerbating the stream’s already low oxygen, or hypoxic state, and leading to high mortality rates among plants, aquatic species and giving off a foul smell.

In 2003, the Matash Yad Chana, a wastewater treatment plant, was established around the vicinity of Yishuv Yad Chana in Israel. According to Humberto Yakov, the technical manager of the plant, the facility was established as the “Emergency Plant for the treatment of the Nablus Stream water,” with the intention to act as a temporary solution to treat the contaminated stream water originating in the West Bank.

Yaakov mentioned how by the time the polluted waters reach his plant on the Israeli side of the green line, all aquatic life is dead. The treatment plant that he maintains struggles to keep up with the influx of polluted water, especially during the olive harvest. While the plant only has a processing capacity of approximately 7,500 cubic meters (CM) per day, flow rates doubling that amount of wastewater can be generated during the olive harvest.

“Akar water is extremely hard to treat. As demand and production have increased over the years, it’s been tougher to treat properly,” said Yakov. In November of 2019, the treatment plant failed to contain the akar, which caused the coastal waters of the Mediterranean Sea to be tinted black between the areas of Bet Yanai and Mikhmoret. As demand for olive oil increases annually, Yaakov predicts next year’s harvest season will be significantly worse, with a thick black layer potentially extending a further 10 km south until Netanya.

In order to reduce the akar contamination, Oelsner has suggested encouraging Palestinian olive oil producers to collect the akar during production which could then be used as a land stabilizer in agricultural areas. 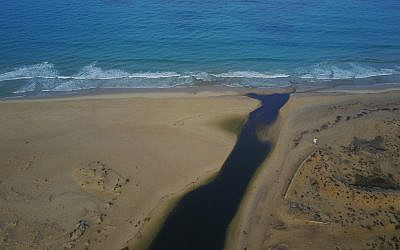 Yakov further described the other multiple sources of contamination originating in the West Bank. Aside from significant levels of residential trash and plastic being dumped into the stream, many industries along the stream banks also contribute to its pollution. Upstream from the Palestinian treatment plant, there are about 30-40 stone cutting factories, which dump high levels of un-processable rock content into the stream.

Yaakov laments over the fact that the Yad Chana wastewater treatment facility has received no additional financial support from the Israeli government since it was first constructed, despite increases in the volume of waste water originating from the West Bank. As the pollution comes from within the Palestinian territories, the Israeli government has been reluctant to invest more money into the plant and is waiting for the PA to do their part in improving their own water treatment facility.

In the Palestinian territories, the Wastewater Treatment Plant Nablus West was built in 2013 and financed by Germany. It was constructed with the capability of treating solid waste and sanitary effluent, but lacks the capacity to deal with organic waste. The plant is modern and well planned according to Oelsner, but is poorly maintained and produces low quality and oftentimes contaminated water, which eventually makes its way into the Alexander Stream.

Oelsner and his research team are constantly monitoring the stream estuary. In many instances, the waters test positive for pathogens and residues of human medication and pesticides.

Water agreements between the PA and Israel have been complex and oftentimes, neglected. From 1995-2008, the PA had the responsibility of installing wastewater treatment plants and maintaining them, by which they did not abide.

As of March 2009, Palestinians were generating approximately 52 million cubic meters (MCM) of wastewater annually. The PA treats 4 MCM, and about 14 MCM are treated in Israeli plants. The remaining 34 MCM flow through streams, pollute groundwater, and the environment on both sides. Despite Germany, USA, Japan, and the World Bank offering to allocate up to 300 millions USD towards the construction of wastewater treatment plants in the West Bank, the PA has not advanced any such projects.

Due to high initial costs and lack of expertise and experience operating high-quality plants, the PA has preferred to let their wastewater flow into Israel despite its responsibility to treat it as stipulated under clause 40 of the OSLO II agreements (also referred to as the “Water Agreement”). As a result, Israel has had to treat the Palestinian wastewater entering the country from the West Bank. The cost of treating Palestinian wastewater is deducted from the tax funds owed to the PA by the Israelis. 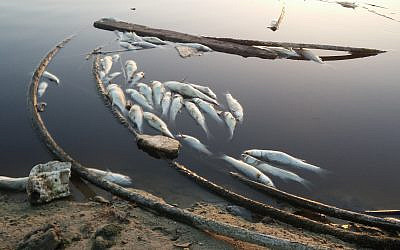 Oelsner says that solutions are underway to restore the stream. There is currently an ongoing project for a new sewage treatment facility capable of handling the wastewater near the current site at Yad Chana. The project, according to him, will be a joint venture between HGM, an Israeli water, civil, and environmental engineering firm, and an international company with expert knowledge on wastewater plant projects.

The budget for the project is NIS 300M, which the Israeli government is legally obligated to finance. Oelsner’s team has recommended a reservoir be built alongside the water plant which the Emek Hefer municipality and other stakeholders have approved. “This is to ensure that in the event of a catastrophic influx of wastewater, the plant will have a large degree of storage capability and operational flexibility.”

Oelsner expects that it will take about two to three more years to finalize the detailed engineering plans of the water treatment plant. After the plans have been approved, he hopes that the construction of the facility will be completed within three to five years.

Once the treatment plant is built and functioning, the polluted water will go through a tertiary treatment process which will allow it to be used for agricultural purposes within Israel. Given that the Alexander Stream is naturally a winter flowing stream (as opposed to naturally flowing year round), diverting the treated water towards agricultural purposes will dry the upper part of the stream. Doing so will eventually lead to restoration. However, Oelsner says that “if the public is opposed to the sight of a dried-up stream, we can transport water from other sources around the country to keep the stream full at all times.”

About the Author
Sarah Vorsanger is a writer and editor at ZAVIT in English, an initiative of The Israeli Society of Ecology and Environmental Sciences. Sarah is from New York, but now lives in Tel Aviv. As a writer for Zavit, she is committed to bridging the gap between science and public perception and strives to promote ecological awareness by making environmental research accessible and understandable to everyone.
Related Topics
Related Posts
Sarah Vorsanger
Comments