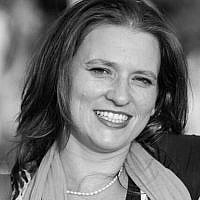 The Blogs
Ruth Kara-Ivanov Kaniel
Apply for a Blog
Advertisement
Please note that the posts on The Blogs are contributed by third parties. The opinions, facts and any media content in them are presented solely by the authors, and neither The Times of Israel nor its partners assume any responsibility for them. Please contact us in case of abuse. In case of abuse,
Report this post.

A large wave of immigration is about to come to Israel from Russia and from Ukraine. As a community and as a society, we must learn from the mass wave of Aliyah from the FSU of the 1990s, from its blind spots and mistakes. We have an opportunity to open our hearts and to understand how difficult their path to freedom has been.

As someone who fled and was saved from the Soviet Union, I want to share the feeling of terror that accompanies those around you who immigrated to Israel from Ukraine, Russia, or one of the FSU countries. Many of us are experiencing the “old,” familiar dread. Indeed, we are a community experiencing post-traumatic distress.

In recent years, the surveillance and imprisonment of people in Russia has increased. People are not allowed to protest. Journalists, social activists, and intellectuals are being imprisoned. Though it was never a free country, it now seems clear that the Iron Curtain has once again closed. People feel that they are being surveilled and pursued; they are not imagining it. Using sophisticated monitoring devices, the secret police are working at full power: sometimes warning letters and threats are sent in advance, but in most cases, sudden arrests and immediate assassinations happen without warning.

Friends and colleagues have described the atmosphere of hatred and hostility on the streets of Moscow. Relatives and friends are willing to report each other, as in the days of Stalin. Families are divided. It will likely take many generations to heal this wound, rooted in unprocessed trauma – of the Holocaust in Russia and Ukraine, followed by years of oppression under the Soviet steamroller. The silencing, the memory of the nighttime arrests, the NKVD with their black coats and cars waiting outside for the journey of terror.  They might, at any moment, come and “take” you. At all times you needed to be prepared for arrest. For interrogation. For false accusations. For shooting. For hanging. For deportation.

Blood is now being spilled in Ukraine. Simultaneously, a massacre of souls is taking place in Russia. Violence, totalitarianism, militarism, oppression. The elimination of freedom and the sacrifice of the human spirit is unseen. It is a destruction that permeates and is transmitted from generation to generation. It even threatens the souls of our children, who were born in the Holy Land. Even if the geographic landscape has changed, absent processing and conceptualization, spiritual shock and cross-generational trauma cannot disappear. Communism succeeded in turning parents against their children, couples against one another. The totalitarian Soviet regime nearly succeeded in eliminating our humanity. The flag of a poisonous motherland continues to wave over our heads. We suffer from phantom pains of amputation from our birthplace and the land of our origin, a place that was destroyed for us years ago.

A catastrophe is happening in Europe, and it touches all of us. In Israel there are more than two million Russian-speaking immigrants. Most of them are re-experiencing repressed trauma. People dream that they are going to be arrested or imagine hearing the KGB at their doors.

Though they escaped, many feel that their worlds are being destroyed once again. Their childhoods and youth were taken from them. Intergenerational tragedies do not disappear but continue to prowl the depths of the soul, emerging in flashbacks and moments of dissociation, in uncontrollable trembling or recurring nightmares.

Fleeing, with a bag in hand

Asi, my partner, has been in Kishinev, Moldova for nearly a month. Together with other organizations, the staff of the JDC (Joint Distribution Committee) are receiving hundreds of thousands of refugees fleeing Ukraine. The stories that he tells are inconceivable. People leaving their entire lives behind, carrying one bag. Families torn apart. Pregnant women, the elderly, little children, travelling between 60 and 90 hours to cross the border. Imagine disabled people in wheelchairs and mothers with infants, suitcases and bags in hand, after the interminable and terrifying journey, forced to walk seven more kilometers in heavy snow to cross the border. Many of them suffer from nervous breakdowns, depression, and physical and mental illness. Many families have lost loved ones and have been scattered around the world.

These volunteers in the field who are encountering people in crisis are fortunate to find generous support. Chabad, the Jewish Agency for Israel, the local community, Nativ (previously the Liaison Bureau), counselors and psychologists, philanthropists, and countless volunteers are working together. They are providing refugees with beds and warm blankets, food, and words of encouragement.

A large wave of immigration is about to come to Israel from Russia and from Ukraine. We have an opportunity to fix that which needs fixing. To open our hearts. To understand where these refugees, immigrants, nomads, runaways, olim are coming from. To understand how difficult their path to freedom has been. As a community and as a society, we have the opportunity to learn from the mass wave of Aliyah from the FSU of the 1990s, from its blind spots and mistakes.

Jewish tradition teaches us to live the past in the present and to learn from it. Thus, “in every generation each person must see themselves as if they personally left Egypt” (Babylonian Talmud Pesachim 116b). We cannot forget our wanderings and the difficulties of our past. “Remember that you were a slave in the land of Egypt” (Deuteronomy 5:14). Here, right now, images of terror from the past recur before our eyes: refugees seeking warmth, nutrition, and shelter, as many of our parents and grandparents experienced.

We have the privilege of being “at home” in our own land while helping the oppressed abroad and in Israel. The story of the Exodus from Egypt, like the story of Soviet Jewry, requires us to listen well and to extend a warm welcome, not to turn our backs. If we remember the context from which these refugees arrive, perhaps we will be able to approach them without being deterred by their otherness. To help those fleeing, to soften the breach in relationships between the generations. To provide a language for the nameless trauma that has been growing since the beginning of the twentieth century.

I write this so that you may know how brokenhearted those who once left the FSU are feeling. Terror grips us. We need compassion. We are all refugees.

About the Author
Dr. Ruth Kara-Ivanov Kaniel (Ph.D. The Hebrew University of Jerusalem, 2010) is Senior Lecturer in the Department of Jewish History and Thought at the University of Haifa where she heads the Posen Saulire Foundation-funded Jewish Israeli Culture Program. She also serves as Research Fellow at the Tel Aviv Institute for Contemporary Psychoanalysis and at the Shalom Hartman Institute in Jerusalem. Her research deals with intersections between mysticism, gender, and psychoanalysis. Dr. Kara-Ivanov Kaniel was a postdoctoral fellow at New York University, the HBI center at Brandeis University, and a Kreitman and Matanel at Ben-Gurion University. She also headed a Research Group on “Psychoanalysis and Kabbalah” at the Van Leer Jerusalem Institute. Her book Holiness and Transgression: Mothers of the Messiah in the Jewish Myth was published by Academic Studies Press (2017). Her book Human Ropes—Birth in Kabbalah and Psychoanalysis” won the Gorgias Press competition for Jewish Thought and will soon be published by De Gruyter Press. Her new book, The Feminine Messiah: King David in the Image of the Shekhina in Kabbalistic Literature (2021) was published recently by Brill. A poet and editor of poetry, as well as translator of Russian poets into Hebrew, her book The World Has No Silence (2011) won the Rachel Negev Literature Award. Her The Soul is Moved was published in the Ritmus Poetry Series of the Hakibbutz Hameuhad Press in 2017. Her latest poetry book, Diamonds and Ashes, will be published by Pardes Press in 2022.
Related Topics
Related Posts
Comments