Throughout the horribly long summer of 2014, when my home in the Western Negev* turned into a landing pad for mortars, and the fields around became fertile ground for the digging of tunnels, I felt the love and support of the rest of Israel. Indeed, I received messages of support and encouragement from around the world, as well.

When the war ended suddenly, a day that brought the tragic deaths of two friends — men I had known for almost 40 years — we, in our area, were left with tears and promises. Soldiers stayed on to guard us, exhibiting a presence with the implication that if the community were to be infiltrated, they would be there, armed and trained to respond in seconds. We were promised that until a physical barrier existed between us and the Gaza Strip, the soldiers would provide our safety net.

Five months later, against our wishes, despite our protests and without the promised physical barrier, the soldiers were deployed from our region and relocated to other “important” missions. Although we had a spanking new electronic fence installed around our perimeter to protect us against infiltration, I felt …well… sort of abandoned. I still don’t want to think about how quickly our perimeter could be breached, or how long it would actually take armed soldiers to arrive.

Feeling pretty much left to our own devices, a movement has been growing to help residents channel our energies into “doing” rather than being victims of circumstance. The Movement for the Future of the Western Negev sprouted in the middle of the war, when families who lived here believed that there had to be a better way. We believe that life on the border does not have to be synonymous with life under fire. We KNOW that there are viable solutions but our government needs to take brave steps to initiate them, even at the cost of certain politicians’ seats.

Recently, we in the Movement for the Future of the Western Negev have combined forces with another movement with similar goals – Darkenu – and have started a joint campaign: “We are ALL the Western Negev”. Because now, it’s our turn. As the situation in Gaza goes from bad to worse, so do the prospects for another war. Their water has become undrinkable, and in this cold, wet winter, they have only sporadic electricity for only a few hours a day. As people who live there become more and more desperate with less and less hope on the horizon, and as the headlines scream out about the tunnels continually being dug, it’s our turn to recruit wide public support to try to head off the next war.

For the past ten years, the month of February has been bringing throngs of tourists from all over the country to the “Red South” festival, to see the blooming red anemones and offer support for the small businesses of the region. In a push to harness some of that love and support for the region, we ventured out with our campaign. 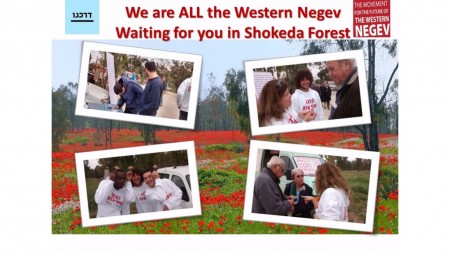 Yesterday we stood at the entrance to the seasonal open air market at Shokeda Forest from 9:30 – 13:00 (until our stickers and cards ran out). We handed out little paper umbrellas to protect visitors against the “tiftufim” (Hebrew for raindrops but an annoying euphemism used to describe sporadic rocket fire). We asked them to sign up to support our pleas to the government that a long term solution be found. Cocktail umbrellas. Cute, right? (Never failed to bring a smile to their lips) But here’s the thing, the gag would be funny if it weren’t so close to the truth. (We’re also working on cork plugs to stick into tunnel openings.)

I can count on one hand the number of people who turned away and refused to sign or listen or empathize (and not even a full hand, at that). The love and support we were given was AMAZING!!!

The people who came and signed were from different political parties and regions: Tel Aviv, Jerusalem, the Golan Heights, Otniel, Yerucham and every place in between. They came, they listened, they asked questions and they signed, because everyone agrees that, while we may not agree on HOW to solve the problem we ALL agree that the government needs to take serious steps to solve the problem. Because we deserve to live in security, and another war is NOT an option.

So thank you, everyone who came and signed and encouraged us! (Especially the sweet English speaking couple who came over to me and said “Are you Adele? You’re the reason we came here! We read your blog and figured: only an hour from Tel Aviv? How can we NOT come!”)

Thank you to all 171 people who pledged their support, because now, it’s our turn. And I left there feeling that we really ARE all the Western Negev! 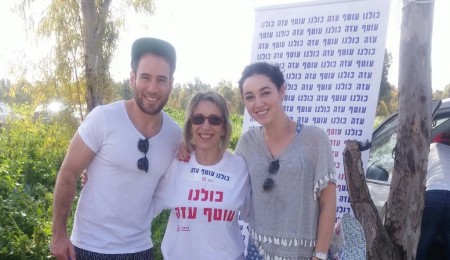 If you are interested in learning more about the Movement for the Future of the Western Negev, please check out our Facebook page and sign up here for updates: http://bit.ly/FutureWesternNegev And look for us in Shokeda Forest and other venues during the weekends of “Red South” (Darom Adom)!

*The region in which I live, is known by two names. Some people call it “Otef Aza” (Gaza Envelope). Others call it the “Western Negev”. While the first may be more dramatic, I personally tend to use the second, because I prefer to define myself in relation to Israel, rather than in relation to Gaza.