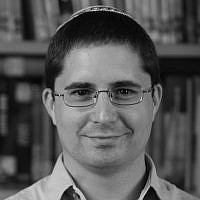 The Blogs
Yehoshua Oz
Apply for a Blog
Please note that the posts on The Blogs are contributed by third parties. The opinions, facts and any media content in them are presented solely by the authors, and neither The Times of Israel nor its partners assume any responsibility for them. Please contact us in case of abuse. In case of abuse,
Report this post.

In this highly emotional time with so much senseless violence and tears of anguish, we are flush with emotions and some of us are left with a sense of despair and wondering if Israeli society, too, is one that does not value life or have any sense of morality. Though it may seem out of place to say at this time, it must be said: we are not the same.

A murderer is a murderer is a murderer. Any person who intentionally takes a life – especially the life of a child – without just cause (such as posing an immediate danger to the lives of others) has committed an odious and heinous act. There can be no cause which justifies such an act. There is no excuse which accounts for such a crime. No elixir or incantation can clean the blood from such a criminal’s hands.

Speaking in nearly universal terms, Israeli society and leadership leave no quarter for such criminals. To little surprise, strong words of condemnation were forthcoming following the murder of Israeli teens. What should be no less surprising is that within hours of the news of Muhammad Abu Khdeir’s murder, Israeli politicians from across the spectrum were on record denouncing the taking of the life of the Palestinian teen. On Wednesday morning, Minister Uri Ariel of the rightist Bayit Yehudi party called the boy’s murder a “heinous and shocking act” and urged the police to use all means necessary to find and bring the perpetrators to justice.  Chairwoman of the leftwing HaTnua party and Minister of Justice Tzipi Livni also called the murder shocking and said “zero tolerance” must be displayed for such crimes.

Palestinian Authority President Mahmoud Abbas did rebuke the kidnappers of the Israeli teens by saying that the Israelis “are human beings like us, and we must look for them and return them to their families.”

This is where the comparisons stop.

Israelis en masse will not call the individuals who committed the murder heroes, martyrs, or leaders of a resistance. The mothers of these criminals will not be interviewed on television and say how proud they are of their sons. Unlike the Palestinian Authority, the Israeli government will not pay salaries to the convicted individuals or their families, paying a higher sum the longer the sentence – thereby specifically incentivizing more monstrous acts. No Israeli municipality will name a square or a road in honor of the perpetrators. No Israeli politician will ask for them to be pardoned as part of the peace process or other process of national reconciliation or compromise.

Are some Israeli entities due for introspection? The Israel Police will undoubtedly help us understand the means and motive of the criminals who stole the life of young Muhammad. There is no doubt that the families, schools, communities, and others surrounding the perpetrators should and will look inward to understand what, if any, role they might have played in contributing to the perpetrators’ monstrous act or what signs they might have missed that might have allowed them to stop the crime. Israeli society as a whole should and will take stock, trying to understand what further can be done to impart to our youth the idea that all human beings are created in the image of G-d.

Atrocious, criminal acts have been perpetrated by Arabs and Jews over these last few days. The test ahead of everyone in this region is how they respond. We can only hope that a change happens in Palestinian society which shows their demonstrative rejection of the murder of innocents under any circumstances. Until that day, we must keep to the moral high road and hope that we will not be alone much longer. Though it may be of little solace, we must take comfort in the moral government, culture, and society we have created and do all in our power to maintain and continually improve upon it.