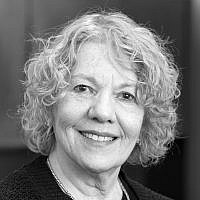 The Blogs
Karen Shawn
Apply for a Blog
Please note that the posts on The Blogs are contributed by third parties. The opinions, facts and any media content in them are presented solely by the authors, and neither The Times of Israel nor its partners assume any responsibility for them. Please contact us in case of abuse. In case of abuse,
Report this post.

Anti-Semitic speech and actions continue despite the many thousands of words we’ve spoken about the dangers of hate speech. We are raising our voices, pleading our case, and sending a clear message, we believe, fighting anti-Semitism through lectures, interviews, conferences, education and rallies around the country.

We plan myriad talks for January 27, International Holocaust Remembrance Day, especially auspicious this year because it marked the 75th anniversary of the liberation of Auschwitz. We teach about the death camp, tell of its legacy and discuss its meaning for the world.

We voice the anxiety and grief we feel, the pall of fear that hangs over communities where schools and synagogues are now locked and guarded. We wonder aloud if we are missing the signs German Jews missed. Is now the time to make aliyah? Are today’s acts of violence against us a harbinger of worse things to come? We call out for help, for signs of positive change.

Who, though, is hearing our laments? The perpetrators are not listening.

In Parashat Mikeitz, passuk chaf aleph, Yosef’s brothers say to one another, “Indeed we are guilty concerning our brother; we saw his heartfelt anguish b’hitchaneno eileinu ve’lo sha’manu–when he pleaded with us and we paid no heed.” But in the earlier Parashat Vayeishev, when the brothers stripped him of his tunic and cast him into the pit, we read nothing about his cries; there are no anguished pleas. Why, then, would the brothers now refer to Yosef’s cries?

Dr. Aviva Zornberg, in her book The Murmuring Deep, suggests that Yosef did scream, but the brothers turned a deaf ear to him; their unreceptive hearts prevented them from hearing him. To be heard, words must reach the heart; only then can there be action. Not until the brothers faced the guilt of their past and recognized the tragedy of what they had done were they able to hear and take responsibility for the cries that Yosef actually did utter 22 years before.

Zornberg writes that “for the . . . power of language to work . . . a listening Other is required.” [1] If no one is listening, it’s as if nothing was said. We don’t hear Yosef’s pleas until the brothers’ hearts are finally able to hear them.

Thus, it makes sense that in Parashat Vayigash, Yehuda, almost as if he learned this lesson, says to Yosef, “May your servant speak a word b’aznei—in my lord’s ears”—meaning, according to Rashi, may the words penetrate, may they convince you—in other words, may they reach your heart. Yosef’s anguish was finally heard. His pleas from the pit were not new; it was the brothers’ hearing them now that was new. That made all the difference.

If the perpetrators in our world are not hearing our cries, it is as if we haven’t called out. How can we learn to speak so haters can hear, to teach so that they can learn? How can we help such people become the “listening Others” we so desperately need? In our troubled world, how can those who are escalating tensions and fomenting hatred balance the pain of their own fears and profound frustrations with understanding the devastating effects of their misplaced anger? What can we say, and how and to whom can we say it, so that those who rail against us can stop and hear us and then care enough to change?

As this year’s milestone memorial day coincided with the frightening increase in violent words and actions against us, may we have the zechut, the merit, to rethink the content and manner of our pleas and reconsider our target audiences. May we find and reach those who need to hear us. May we find the words that can and need to be heard by those who are causing the chaos. May we help them to discover their own hearing ear and listening heart.