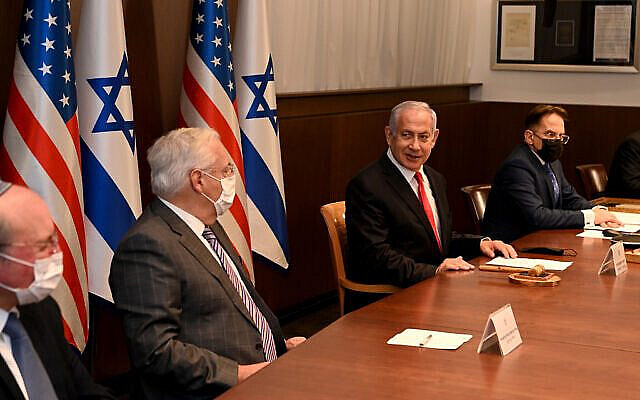 When it comes to negotiations to resolve the conflict, the Palestinians are willing but unable, and the Israelis are able but unwilling.  The United States, together with European and Arab partners, can help the two get to the table and ensure that no one gets up until white smoke rises.

Conventional wisdom has it that a resolution of the Israel-Palestine conflict will not be high on President-elect Joe Biden’s agenda. Biden will certainly be more evenhanded than his predecessor and is expected to take steps to ameliorate the economic hardships of the Palestinians and resume diplomatic contacts with Ramallah. He will remove the cloak of legitimacy in which Trump draped the settlements, although US opposition to Israeli Government policies will likely be expressed through ineffective statements rather than action. As for spearheading an initiative to resolve the conflict, there is broad consensus that Biden will be reluctant to grapple with a distant and ongoing conflict that shows no signs of boiling over at this point in time. I, however, am still unwilling to accept that as an irreversible fact.

In recent weeks, two major position papers were released with ideas for a new U.S. strategy toward the conflict. One was a joint initiative by the US/Middle East Project and the International Crisis Group, and the other was published by the Center for a New American Security. Both offer proposals aimed at keeping the two-state solution alive by “changing the terms of the debate” and taking tangible steps “to improve the freedom, prosperity, and security of all people living between the Mediterranean Sea and the Jordan River.” What is troubling, however, is their operating assumption that there is no room to consider negotiations on a final peace agreement at this time and their failure to lay out a timetable for moving from the confidence-building stage to getting down to brass tacks.

Trump May Be Gone But His Policies Could Come Back

Time is not an element to be ignored. There is no guarantee that the Democratic victory, which includes a majority in the House and tie-breaking control of the Senate, will be repeated in 2024. Trump won over 74 million votes, and had the Pfizer vaccine announcement come out just one week earlier, it could have put him over the top.  Furthermore, when one considers that the Democrats also benefited from the votes of staunch Republicans who simply couldn’t bring themselves to cast their ballot for the apparently unbalanced man inhabiting the White House, one realizes that the bar is very low for a Republican candidate who could lead the party to victory in another four years.  I don’t foresee a Donald Trump comeback, but should the Presidency end up in the hands of the likes of Mike Pompeo, we will see a return to the Trump era’s devastating Middle East policy. Should that happen, the only options remaining to the Palestinians will be surrender or armed conflict, and I’d put my money on the latter. That is the source of my frustration over talk of a long-term approach based on establishing “building blocks”  and advancing “the vision” of a negotiated solution presented in the aforementioned papers. We don’t need a vision; we need a peace agreement, and we need it soon.

It is true that neither side is ready for negotiations now, but the reasons are vastly different.  The Palestinians are willing but unable, and the Israelis are able but unwilling. Thus, different approaches are required to get the two sides to the table.

Renewing the Mandate of the Palestinian Leadership

President Mahmoud Abbas continues to repeat his call for negotiations within a multilateral framework based on the internationally agreed parameters. The Palestinian leadership, however, lacks legitimacy in the eyes of its public, and the key to regaining it lies in holding elections. This is where the hurdle of the rift between Hamas and Fatah comes into play. Even if the two have truly achieved an agreement on holding elections, which remains to be seen, the question of Hamas’s legitimacy in the eyes of the international community must be addressed in advance to avoid the fiasco that followed the results of the 2006 elections. The outdated Quartet Principles need to be reexamined, and many of the conditions, such as the recognition of previous agreements that have lost their relevance, should be dropped. The only pertinent principle is the renunciation of violence as a means for Hamas to achieve its goals, and Europe and the United States must engage with the Hamas leadership to find a formula that will enable this outcome.

On the Israeli side, except for a shrinking number of hard-core leftists, there is no interest in addressing – never mind resolving – the conflict. Having achieved normalization with several Arab states without withdrawing from an inch of Palestinian territory, the Israeli Government and most of the public believe that the principle of territory for peace is dead. As Israel heads to its fourth election in the course of two years, the line that has been drawn between the opposing camps is once again “Bibi: yes or no?” If the word “peace” is uttered at all, it’s usually within the context of the flourishing relations with the UAE. The Arab public appears to be ready to set the issue of the occupation aside in order to advance the redress of their domestic grievances. Even Nitzan Horowitz, chair of the left-wing Meretz party, has not ruled out supporting a government led by Jewish supremacist Gideon Saar if it means bringing down Netanyahu. The hot new slogan is “democratic values,” as if democracy can thrive in a country that controls the lives of millions of disenfranchised Palestinians. No matter its makeup, the only chance of getting the next Israeli government to agree to negotiations based on the 1967 lines is by holding Israel accountable for its violations of international law. Steps such as banning the import of settlement products, ending all cooperation of any form with enterprises in the settlements, and prosecuting perpetrators of crimes against humanity, to name just a few, would serve as a wake-up call for the Israeli public and its leadership.

The Munich Group as a Basis for Multilateralism

The Biden administration will certainly not do any of these things on its own, but it doesn’t have to, nor should it.  What is needed is a coalition of like-minded European partners and principal Arab states that would work in partnership with the United States to create a multilateral negotiation framework. The basis for such a coalition already exists in the Munich Group, which is composed of France, Germany, Egypt, and Jordan. After their meeting in Cairo last week, the foreign ministers of these countries expressed their readiness to work with the United States to facilitate negotiations that would lead to a comprehensive, just and lasting peace in the region on the basis of internationally recognized determinants.  The Biden administration should embrace this initiative. The goal, however, should not be the launch of yet another open-ended peace “process” but rather the conclusion of a peace agreement before the midterm elections and the Democrats’ possible loss of their majority in Congress in 2022.

This is not a pipe dream. The international community has the ability to set the table, compel the parties to take their seats and remain in them until white smoke rises,  and support a positive outcome through active mediation when needed.

No one should be lulled into thinking that a resolution of the Israel-Palestine conflict can be put off indefinitely. Although things are quiet at the moment, it is a variable with the potential for massive destabilization of the region and beyond.

Nowhere in this article have I addressed the moral imperative of ending the occupation because, unfortunately, that argument has fewer chances of spurring the world into action. Yet as we celebrate the legacy of Martin Luther King, Jr. this week, it is worth recalling his wise words: “The time is always right to do what is right.”