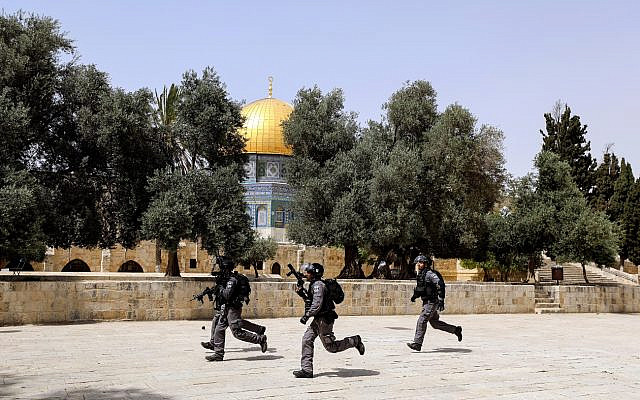 Israeli security forces run during clashes with Palestinians at the compound that houses Al-Aqsa Mosque, known to Muslims as Noble Sanctuary and to Jews as Temple Mount, in Jerusalem's Old City May 21, 2021. REUTERS/Ammar Awad

Israel has always known how to pull together when the guns roared. Not this time. It has been creeping in for several years now, but in this campaign, the malice in our midst has defeated the necessity for unity. As soon as the rockets were launched on our cities, politicians from all sides broke out in a war of words, blaming each other of incompetence, indecision, and opportunism. As the days passed and Israel’s military tactics proved successful, these same politicians scrambled to attribute the success to themselves and deny it of their rivals. And all the while, each faction of the nation sided with its own politicians and chided their dissenters on social media, news media, and anywhere they could.

Socially, we lost the war as soon as it began, and if we lost the war on our solidarity, we’ll lose the land, as well. The Talmud writes (Yoma 9b) that shortly before the ruin of the Second Temple, the people of Israel, but mainly the leaders of the country, were so spiteful toward each other that they would “eat and drink with one another, [yet] stab each other with the daggers in their tongues.” This, according to the Talmud, is among the key reasons that Nebuchadnezzar II conquered Israel and exiled its people to Babylon. We are well on our way to a similar fate.

If we are to avoid the fate of our ancestors, we mustn’t wait for our leaders to save us. They are immersed from head to toe in their power struggles. They will not listen to us, just as they do not listen to each other. When you watch them on TV, it is obvious that they are there to talk, and for no other purpose. They speak the whole time they are on the air, cut into each other’s words, and in the resulting cacophony, you cannot understand a word. I cannot watch them anymore.

Therefore, we have no one to rely on but ourselves—the unity of regular people who understand that division means destruction of the country. Only if we begin to work on our unity, above all our many differences, our so-called leaders will gradually understand that they, too, must move in this direction, too.