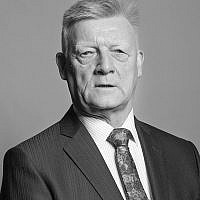 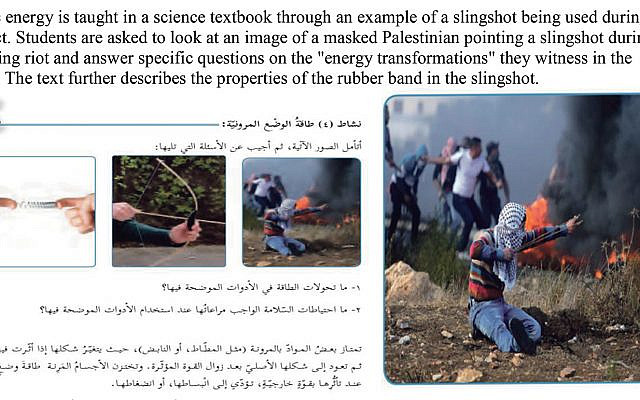 In this Palestinian school textbook, physics students are asked to calculate the forces at play when a slingshot is fired at Israeli soldiers (Jewish News)

Britain is a long-standing advocate of  a two-state solution, but its funding for these lessons in hate undermines this.

We should support efforts to bring about peace, reconciliation and coexistence between Israelis and Palestinians. Instead, UK aid is helping to teach five-year-olds the word for ‘martyr’ and teenage boys that they’ll be rewarded with ‘72 virgin brides in paradise’ if they die in terror attacks. This poison infuses the curriculum: science lessons, for instance, teach Newton’s Second Law through the image of a boy with a slingshot targeting soldiers. Indeed, research by the Institute for Monitoring Peace and Cultural Tolerance in School Education shows that, across the curriculum, there are nearly 2,800 references to violence.

The government was first warned about the contents of the curriculum when the PA introduced it in September 2017. But ministers dismissed those warnings and instead spent three years dragging their feet and saying they were waiting for the findings of an international review commissioned by the European Union.

That review, which was supposed to have been completed in September 2019, remains shrouded in secrecy and it is not even clear that it will ever be published. All our government currently has to say is that it continues to raise the issue with the PA and that it supports the publication of the EU review.

But the government knows that the PA has repeatedly ignored pleas by ministers to clean up its act. It’s not hard to work out why the PA seems so indifferent to ministers’ pleas. The agreement between the UK and the PA that governs aid states that Ramallah must take action against “incitement to violence, including allegations of incitement in the educational curriculum”. The PA has entered into that commitment every year since 2016 – the very year, in fact, in which it was introducing its new curriculum – and every year it’s broken that commitment.

Despite this, the UK government cheques that pay the salaries of 33,000 teachers and civil servants in the PA Education Ministry – the salaries of those who devised, implemented and teach the curriculum – have continued to flow.

We believe that the UK should follow Norway and suspend all aid to the PA that directly or indirectly finances those teaching and implementing this curriculum until the PA commits to wholesale and urgent revisions of it. While that money remains suspended, it should be redirected to Palestinian education NGOs that have a proven track record of promoting peace and the values of tolerance, respect and coexistence.