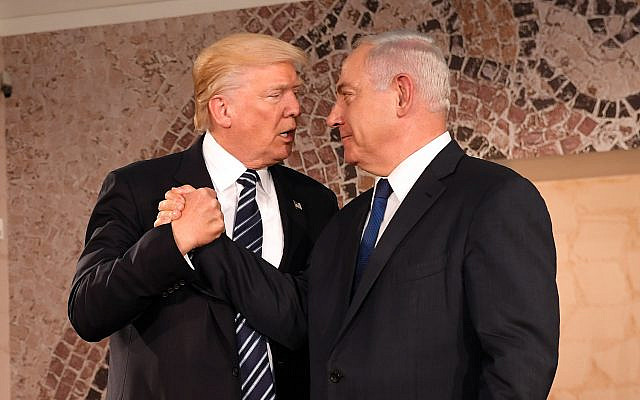 US President Donald Trump and Prime Minister Benjamin Netanyahu, at the Israel Museum. Jerusalem, May 23, 2017. (US Embassy Jerusalem, CC BY 2.0))

Israelis are gearing up to return to the ballot box for the third time in 12 months, with all the polls showing that the forthcoming round will also end in yet another political gridlock. While pundits insist that these elections, like their predecessors, will focus mainly on the political fate of Binyamin Netanyahu and that it will be difficult (if not well-nigh impossible) to alter the preferences of the electorate, politicians are preoccupied with how to break the deadlock. For them, six weeks are a lifetime in politics — especially in the countdown to elections. They are desperately grappling for a gamechanger that will tilt the balance in their favor. Now that the lists have been submitted and the composition of the contestants confirmed, they are beginning to look elsewhere.

This is where the proverbial elephant in the room — the Israeli-Arab conflict and the Palestinian issue at its core — comes into play. Since 1967, this question has been the most salient indicator of voter predispositions and the single most accurate predictor of electoral outcomes. With the concerted attempt by the caretaker prime minister to move from a policy of conflict management to outright control of the West Bank, it is, once again, at the substantive forefront of the national agenda. It has not until now, however, occupied center stage in recent campaigns — preempted by social cleavages and matters of personal integrity. That is about to change.

The Trump administration has hinted broadly that it intends to reveal the details of its peace plan — commonly dubbed the “deal of the century” — during the course of the current electoral season. In stark contrast to its forbearance in April and September, when it had an arsenal of pro-Netanyahu carrots to dispense (including, most notably, recognition of Jerusalem as the capital of Israel, the annexation of the Golan Heights, and the intimation that Jewish settlements in the heart of the Palestinian territories are “not illegal”), the only card that the beleaguered White House can effectively add at this juncture to assist an equally precarious occupant of Balfour Street is its peace plan.

This is the least auspicious moment to do so. What has been kept under wraps for quite some time would best be left there. Releasing the main elements of the plan now is nothing but a grandiose ploy designed not only to promote the immediate interests of its key beneficiaries, Netanyahu and Trump, but also to sow additional havoc in the heart of the Middle East’s already highly restive political terrain — with grave consequences for Israel’s relations with its immediate neighbors (especially Jordan).

Failing mutual agreement on such a deferral, the alternative is to confront the issue head-on in the course of the campaign, thus preempting any shock effect such a last-minute initiative could have. The groundwork for such an eventuality should be laid today — before it is too late.

The contents of the so-called deal of the century are covered in a thick cloud of mystery bordering on misinformation. Periodic leaks, most recently publicized in September by the Lebanese Al-Mayadeen network, have hinted at a mixture of annexationist measures (involving the Jordan Valley and Israeli settlements across the Green Line), joint Israeli-Palestinian overrule in Jerusalem, and a regional economic incentive package along the lines initially presented by Jared Kushner in Bahrain last spring. None of these elements has been confirmed — or for that matter denied. Nor have any of the specifics been brought to light. So why dangle this unknown proposal before the eyes of Israelis and Palestinians at this time?

The answer lies in its potential value to its main advocates on both sides of the ocean. On a personal level, the publication of a new American peace plan deflects attention from the political exigencies of the US president and the Israeli prime minister, both on the defensive, in light of, respectively, the impeachment proceedings on Capitol Hill and the forthcoming immunity hearings in the Knesset. On the political level, they are convinced that the details of the proposed plan can be used to mobilize their political base (the right-wing bloc in Israel and the Evangelical constituency in the United States), on the eve of particularly contentious electoral contests.

Strategically, Netanyahu and Trump see this as a tool to drive a wedge among their opponents: within the Democratic party in America (which is divided on approaches to the resolution of the conflict) and within the center-left bloc in Israel (that diverges on these issues as well). Tactically, too, such a move sows considerable confusion, while conveniently diverting the limelight from more uncomfortable domestic — not to speak of personal — topics.

The immediate response of political opponents has been to do everything possible to delay the publication of the plan. Democrats in the United States have stated unequivocally that this would provide ample proof for even the most skeptical of Trump’s penchant to interfere in foreign plebiscites. The Blue-White’s Benny Gantz has argued consistently that many Israelis would see such an initiative at this exceptionally delicate juncture in precisely the same way. Both agree that the effect of such a disclosure now would be counterproductive to any serious peace effort.

It is unclear whether these reactions (backed indirectly by the recent reservations voiced by Jason Greenblatt, Trump’s now-retired emissary for the peace process, regarding the advisability of unveiling the plan at this time and the much stronger appeal of senior European Union officials — including six former prime ministers and 25 former foreign ministers — to desist from such an act), can yet sway the administration and its main proponents in Jerusalem. They have already stated that they see no difference between what Bill Clinton did in the waning days of his tenure just prior to the special elections held in Israel in February 2001 — despite the obvious divergence in the status of negotiations and the American role in the region. What is abundantly evident is that preparations must be made forthwith to deal with such a possibility.

The best way to do so — in stark contrast to the current tendency to ignore or postpone the debate — is to preempt it by putting it squarely on the table. On the procedural level, this will give the center-left an opportunity to reaffirm its commitment to highlighting the centrality of Palestinians and Israelis in deciding their destiny. Rather than leaving this issue to a tottering American government which no longer carries any cachet as an honest broker and holds little sway in the region, insistence on bringing the discussion of Israeli-Palestinian futures back home is in itself a refreshing departure from recent trends.

On the substantive level, the Israeli electorate, long divided on these matters, should have a chance to discuss these differences. Netanyahu’s quest to unite the right under a banner of (no-longer creeping) annexation should be discussed openly. This way the left’s rejection of annexation — with all the nuances this position contains — will get the hearing it deserves. So, too, will the variations displayed within the center — from agreement in principle to partial annexation, coupled with a conviction that it stands to do so better than the right during the past 10 years, to unilateral withdrawal or ongoing support for a somewhat modified two-state solution.

There is absolutely no reason to fear a debate on the issues or to attempt to avert such a discussion. By proactively putting Israeli-Palestinian relations front and center it may be possible to inject some content into what is emerging as the most personal, ugly and acrimonious elections in a string of especially rowdy campaigns. It may also open a much-needed discussion on Israel’s place in an increasingly volatile Middle East. At the same time, such a move would obviously blunt the electoral impact of any premature revelation of the deal of the century and, not coincidently, expose the desperation of its initiators.

Elections are not a time for passivity or subterfuge. Netanyahu critics do have options and there is no better timing to put them in play — transparently — than now.