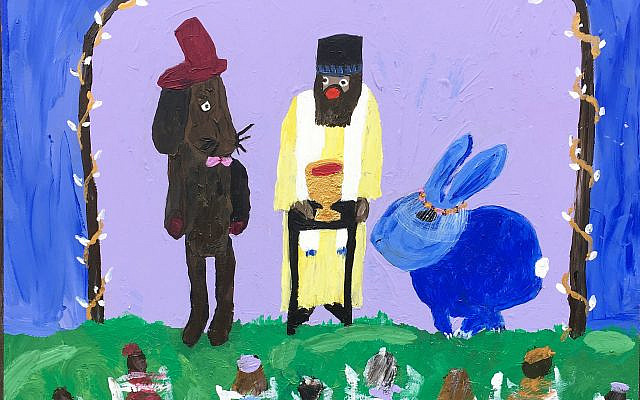 In our tradition, we are not only commanded to “rejoice with bride and bridegroom,” but understand marriage to be something that the Holy One creates, as per the sixth of the sheva berachot: Blessed are You, LORD, Gladdener of groom and bride.

That said, I have been the mother of the groom, and am soon to be the mother of the bride, especially if my daughter and I don’t kill each other first. This because planning a wedding in America in the year 5781 is not so straightforward. Israel presents a different set of wedding-planning obstacles, namely the Orthodox monopoly on the entire enterprise. Versus in America, the land of enough is never enough, where weddings have grown to become such monstrous displays of excess that Jay Gatsby himself would blush.

Especially now, as vaccination rates make in-person (versus Zoom) weddings not only desirable, but in some ways a commodity in short supply. The blockage had been unblocked, meaning that all those couples who put off their nuptials during the pandemic are now rushing to find a venue in which to say their vows. All fine and good. By their very nature weddings are bright, happy, hopeful events — a leap of faith into commitment, love, affection, loyalty, and the future itself. Looking back to my own wedding in the pre-internet dark ages, I’m in awe of my young self as I walk into what I now understand was the beginning of my real education, only in this case I’m majoring in how to be a grownup, such a challenging course of study that I may never graduate.

I like to joke that my own long-ago wedding was a “full princess.” The long white wedding dress. The flowers. The four-piece band under the big white tent on the expansive front yard of the house I’d grown up in. But that was long before destination weddings came along, and with them — and the advent of endless pixilated images of wedding-glam — the multiplicity of pre-wedding events followed by weddings so camera-ready that you have no choice but to applaud the production values.

Two things going on here. The pre-wedding period has become a marathon blitz of pricey events, some including not just bridal showers and bachelorette parties, but bridesmaid trips, with air travel and hotel stays, and the cost of bridesmaid dresses and shoes, and this before the wedding itself.

As for the wedding: if it’s in Cancun or Jamaica or Hawaii or Antigua or Key West or Jackson Hole, guests will have to shell out additional time and money for airfare, two or three nights at a hotel, restaurant dinners — plus give a wedding present.

The obvious irony is that the vast majority of couples who throw these over-the-top weddings are younger people — in their 20s and early 30s — meaning that many of their friends are in no position to shell out big bucks for the pleasure. And not just their friends: who says that both sets of families are sitting on the big bucks?

What offends me about destination weddings, aside from the assumption that gross excess is okay at a time when the world is only just beginning to limp out of COVID-related devastation, is the assumption that everyone is so enchanted by your romance that they’re only too happy to shell out bigly for the pleasure of seeing you walk down the aisle. Look: if I’m throwing a wedding for my daughter in New Jersey, where we live, by necessity some of the guests will have to fly or train in from where they live in order to attend. I get it. Unless both sets of bridal families and friends live in the same town, chances are that a substantial number of guests are going to be sleeping in a hotel. Still. There’s a big gap between asking your college roommate, who lives in Boston, to come to a wedding in Baltimore and asking him to make the trek to Tahoe.

Four thousand bucks to attend a wedding? I don’t think so.

These marrying-monsters of excess aside, on the other end of the spectrum are young people who are so pessimistic about the future (climate change, economic inequity, injustice, the erosion of democracy, the rise is fascism, and so forth) that they’re saying no to the whole enterprise. No to weddings; no to marriage; no to babies. Just flat-out no.

And who can blame them? While desperate and miserable, at least such a stance is ethically responsible. Whereas these excessive, expensive, elaborate and over-the-top destination weddings are, by me, plain old gross.

Am I being judgmental? My daughter, who in recent years has been to her fair share of weddings large and small, would no doubt say so. But the one thing we agree on, as we tip-toe into the marathon of planning her own wedding, is that there’s something greedy about the giant fantasy that in turn becomes the wedding that ate Aruba.

And then what? After the wedding ceremony, be it large or small, religious or secular, at home or far, far away, you still wake up inside your own self, only this time, you’re sharing yourself with another human being, and that — the actual marriage — is where fantasy abruptly stops and real life begins.