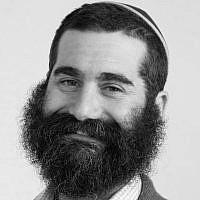 The Blogs
Noach Pawliger
The beard holds secrets to resilience... and a midnight snack
Apply for a Blog
Please note that the posts on The Blogs are contributed by third parties. The opinions, facts and any media content in them are presented solely by the authors, and neither The Times of Israel nor its partners assume any responsibility for them. Please contact us in case of abuse. In case of abuse,
Report this post. 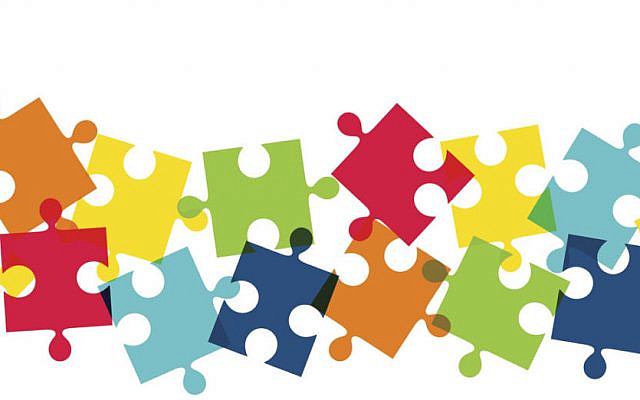 Everyone is a piece to the puzzle, and THAT matters.

I am in my third-grade classroom, Mrs. Fuzzybee’s class, (I will change her name so as not to throw her under the bus, but her name actually sounded like ‘Mrs. Fuzzybee’, and that is not a joke,) sitting behind a cardboard project board that’s been placed on my desk. It is blank, free of colors or images to invite my imagination to drift. It is there for a purpose. The goal is to help me to focus, to refrain from being distracted and distracting others. When I complain, I get little in the way of sympathy, or even empathy. The message from Mrs. Fuzzybee, is something along the lines of “Noah, this is to help you concentrate because you can’t, but it’s OK, you’re still part of the class. You are included.”

Today, some 30 years later, I would have hoped for an evolution in inclusion practices. I would have hoped that the bruises left by that project board, and the rabbit hole of differently abled life toward which I was shuttled, have confirmed for me that unfairness and inconsistency are part of the world order. (The way I now know that Atlanta sports teams, soccer exempted, will consistently choke when getting close to championships. The way I know that ice cream in any Israeli convenience store is better than any I can buy in the U.S. And the way I know that Jewish America has to date been unwilling to re-imagine its approach to inclusion.)

As I reflect on ‘Mrs. Fuzzybee’ and other inclusionist practitioners I’ve met along the way, I can’t help but think about the quintessential Southern phrase, “Bless your heart.” On the face of it, and to newcomers from other parts of the country, it appears a linguistic pleasantry. However, once you understand what lies below the saccharine-sweet words, you realize that when directed at you, it’s the ultimate in passive-aggressive shtech.

If you look up this phrase on Urban Dictionary, you will find a colorful definition that suggests that the one whose heart is to be blessed is a pitiful character, a loser who is politely being asked to take a hike. There are ample bless-your-heart moments in the Jewish community’s historic approach to inclusion. We would all be well-served by reviewing these as part of a timely chiton hanefesh, an accounting of the soul.

Recently, we were in the swing of a 49-day cycle known as sefirat haOmer, the days leading up to Shavuot when Jews for thousands of years have taken a spiritual inventory of their lives, a cheshbon hanefesh, their emotional and intellectual attributes and fundamental character. Each year, we are given the chance to emerge from this period with deeper self-awareness, toward greater humility, outward affection and warmth.

Let’s go back, to the third week of the counting, the week focusing on Tiferes, compassion. I found myself taking a deep dive into the concept. Sometimes, Tiferes and Chesed can be confused. I have a real issue with Chesed, and, get this, I am a Chabadnik. But the reason is solid.

During exploration of each attribute, we look at other attributes within it. For example, the Chesed within Tiferes, the Gevurah (severity) within Tiferes, and so on. Now, this was where things really created an itch I needed to scratch. So, I reached for a booklet I highly recommend and annually consult, R. Simon Jacobson’s A Spiritual Guide to the Counting of the Omer.  It offers challenging daily exercises and questions. As I reached the section on Chesed in Tiferes, (lovingkindness in compassion), I perceived the questions differently. The reason, I concluded, is the isolated, surreal environment related to the pandemic.

R. Jacobson implores the reader to ask, “Is my compassion tender and loving or does it come across as pity?” BOOM!  As someone who has been swimming in the differently abled sea for more than 25 years, and has existed as a differently abled Jew for now 40 years, I wanted to relate the question to those I work hardest for, our people, and particularly the underdogs. This question said it all.

I distinctly remember speaking to an administrator at a school where I would be speaking with a neuro-typical class about programs for differently-abled cohorts of kid who advised me, “Oh, this is going to be so wonderful, we so need more Chesed projects for our students.” My immediate (internal) response was something along the lines of “Bless your heart, lady.” But I managed to graciously tell the woman that, despite her kind intentions, I found her statement quite distressing.

Here’s why. People seeking a “Chesed project” are typically looking to compartmentalize their kindness. Their Chesed is often patronizing and rooted in pity, suggesting that they are somehow above someone else. However, when Chesed is entwined Tiferes (lovingkindness), a totally different, more appealing picture emerges. Now, Chesed becomes a way of life, rather than a project, and we see others through a lens of Tzedek (justice). No one is a project, a borrowed experience in kindness. Everyone is family, with a unique expression of empowerment, belonging, love, potential and ability.

Recently, most Jewish summer camps announced closure for the summer. What a punch to the gut to someone like me for whom camp has been my life since the moment I first smelled the honeysuckles upon entry to camp in the North Georgia Mountains. The endless potential for Jewish growth, independence, abilities, and resilience have strong roots in camp. As I read the announcements from various directors, I imagined that, for the first time, all disappointed, excluded campers could empathize with the kids who were never really included in all the fun. The ones only marginally included, and especially, those excluded.

No one seems to ever ask inclusion program camp leaders how many differently abled campers they send home early. No one seems to wonder why so few Jewish camps accept the “other” kids. Why is it that only the adorable, super-high functioning kids who land on the cover of the camp website and brochure? What about those with chronic illnesses, the ones who make involuntary sounds and inconveniently timed bowel movements? The ones who also can be counted on to deliver limitless hugs and broad smiles of gratitude?

Few seem to question why it has become OK that inclusion in synagogues is defined by  accessible bathrooms and ramps, rather than providing opportunities to develop skills, lead and contribute. And, most important, why does the conversation continue to be stuck on the DIS, rather than on ability?

Today, we find ourselves in an unprecedented time, when empathy has never been more important, even as we express it from a distance. Before this past weekend, the draft of this article was solely focused on inclusive practices pertaining to the special needs population.  However, we are in a time of infinite potential when it comes to our empathy.  A time where the true value behind truly hearing others’ stories and struggles whether racial, ability focused, or otherwise, needs to be at the forefront of shaping a new and better society.  Hunkering down at home has been difficult. My home, my prayer are that it might permit us to better feel the isolation of the camper sent home two days into the session because he had a meltdown outside the dining hall that his undertrained counselors didn’t know how to respond to, or the marginalized for whatever reason they couldn’t control.

We may be bored, and eager to send our kids on a playdate, but hopefully we will come out of this better prepared to understand the loneliness of excluded child, and the adult with mental illness, those who’s suffering is a byproduct of the color of their skin.  Finally, we are in a place to hear their stories, to examine our beliefs and realize that, despite how we describe our practices, our community has failed when it comes to inclusion.

What next? As the Lubavitcher Rebbe would often say upon finishing his talks, “Ha maase hu ikar, Action is the main thing.” It all comes back to counting the omer, resolving to reshape our most personal Chesed, moving from pity to justice—from Chesed to Tzedek. Justice allows us to say to another, “I see you, the whole you.  I hear you, and I will empower the whole you.”  It may be time to recalibrate to looking at the neshama of a person, and it’s potential, rather than only the shell.  Let’s get away from always choosing the cutest kid for the cover of the brochure. Let’s eliminate the idea of making a “project” of those whose abilities may look different. Let’s make them an integral, integrated part of our camps, our schools and our communities.

In this season, let’s dare to re-imagine inclusion, not as a project, but as a passion for justice.

About the Author
Noach Pawliger is a chassidic, yet, label-less wonder facilitator, and deadhead. Noach has been the co-founder and Director of Camp Living Wonders, the Southeast's only Jewish residential camp built to empower and train differently abled people and their families to integrate into their respective communities with dignity and purpose. Noach is a recent graduate of Institute for Jewish Experiential Education's M2 Senior Educator's Cohort. While Noach is currently public speaking, or consulting non-profits with their strategic planning, values, and growth, he is constantly on the hunt for opportunities to empower the underdogs, and shift paradigms in the Jewish Community. Noach is also currently building a think tank and initiative focusing on resilience through the lens of Jewish wisdom with the goal to launch pilot programming in 2021. Noach is a Grateful Tatty of 4 and husband to a dynamo Special Educator/stand up comic. His family resides in Atlanta, Ga, where they are eagerly working towards moving to Eretz Yisrael.
Related Topics
Related Posts
Comments