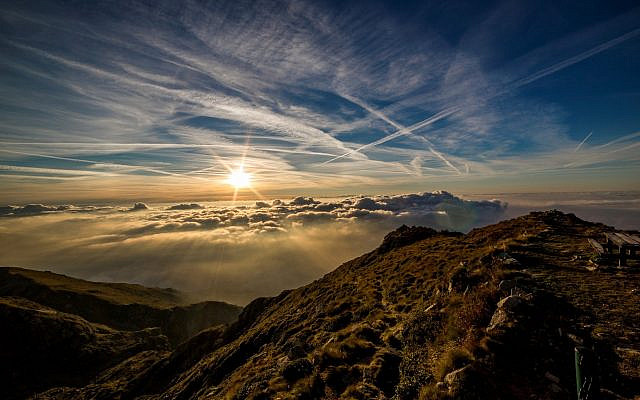 For some people, belief comes easily. From a young age they have believed in God, and that has remained a constant throughout their lives. For others, not so much. There are those who have always struggled with belief. There are those who believed in God in the past, but now find that they have serious doubts and questions and that belief eludes them.

This struggle can be a source of much personal, religious angst. And turning to the Torah can — at first glance, at least — make this even harder.

“I am the Lord your God who has taken you out of the land of Egypt” (Ex. 20:2) is the first of the Ten Commandments, a verse that Rambam interprets to be a mitzvah: we are commanded to believe that God exists. It is hard to understand this position if for no other reason than that it is logically circular — if a person doesn’t believe in God, how can she be told that God has commanded her to believe? More practically, how is a person supposed to fulfill this mitzvah? Belief is not something that someone can achieve through strength of will. There is no muscle that he can move to make himself believe. At best, he can work to cultivate belief. For some, even that demand would feel like an exercise in futility.

A shift in perspective is necessary. First, there are those who reject Rambam’s position. The inclusion of this verse in the Ten Commandments is not an indication as to whether it is or is not a mitzvah. The term used in the Torah is aseret ha’devarim; in Rabbinic literature, aseret ha’dibrot. They are the Ten Utterances, not the Ten Commandments. Moreover, there is no imperative to be found in this verse, no “you must.” It is a preamble, a declaration of who God is and a frame for the mitzvot that follow.

Therein lies the rub. For, commandment or no, belief in God and in the mitzvot as commanded by God underpins our life of Torah and halakha observance. It frames our actions as part of our relationship with God, as our avodat HaShem. Absent this frame, we are living a religious lifestyle, but not a religious life.

Where does that leave someone who struggles with that belief?

The key is understanding what belief, as the Torah understands it, is really about. Maimonidean belief is belief that. It is the assertion of the truth of a statement: “I believe that God exists, that God took us out of Egypt.” It is intellectual and philosophical, not relational. This is not the belief that we find in the Torah.

The Torah’s word for belief is emunah. This word means not belief that, but belief in. The root is ‘omein’, to raise, to be a nursemaid, to cultivate. Mordechai was “omein et Hadassah” (Esther 2:7), he raised Esther. It is relational. It is faith.

At the splitting of the sea, we are told “va’ya’aminu ba’Hashem u’ve’Moshe avdo” (Ex. 14:31), “And they believed in God and in Moshe, God’s servant.” At that moment, they didn’t believe in some fact statement about Moshe or about God. What the verse is telling us, rather, is that at that moment of salvation, they knew that they could totally rely on Moshe and God. They knew that God was there for them and would always be there for them. They had trust. They had faith.

We are told to “Remember the day that you left Egypt all the days of your life” (Deut. 16:3). But how do we remember something that we did not experience? Through speech, through ritual, and through imagining. Every day in Shema we read the verse that God took us out of Egypt. We observe the Yamim Tovim that remind us and ritualize those events. And on Pesach, we immerse ourselves in telling and retelling the story, in concrete expression through mitzvot, in imagining what happened, and in seeing ourselves “as if we left Egypt.”

This is the way that we realize and bring to life the declaration: “I am the Lord your God who took you out of the land of Egypt.” This is what provides the religious frame of our life of Torah and mitzvot.

It is not about answering a question of whether God exists or what actually happened. It is not about history. It is about memory, about cultivating a personal and shared communal image of what happened in the past and a lens through which to look at the present.

So it is with the standing at Mt. Sinai itself. The verse tells us that we are to never forget the day that we stood before God at Mt. Sinai (Deut. 4:10). Technically speaking, we can’t forget it, because we never personally experienced it! So there is only one option left — we have to imagine it, think about it, talk about it, make it a memory that shapes our orientation to mitzvot, to the world and to our fellow human beings.

For those who struggle with belief, there is a way forward. It is to move from belief to faith, from history to memory. Through actions, speech, and imagination we likely won’t come to believe something that we did not already believe in before, but we can come to see things in a different way, in the way that God and the Torah would have us see them.