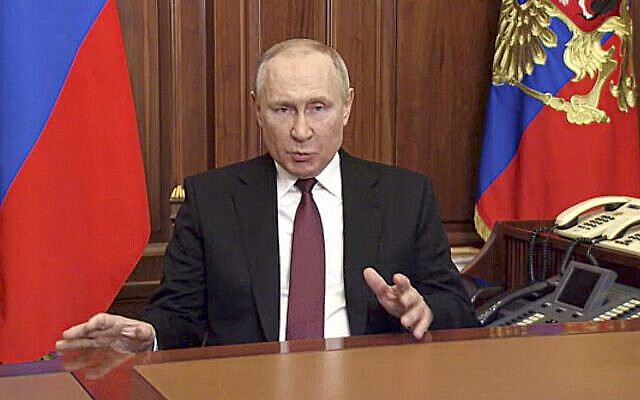 Ukraine is talking tough just now, six months after being invaded by Russia, and Western leaders are sticking to their steadfast support of its President Volodymyr Zelensky. Alas, it is the Russian dictator Vladimir Putin who holds the cards.

Judging by recent videos from Zelensky, Ukraine no longer wants peace, but rather “victory.” Whereas Ukraine initially demanded a return of the territories seized by Russia since February, it now vows to fight for Crimea, which Russia grabbed and annexed in 2014. Some in Ukraine speak of seizing the offensive and attacking targets in Russia.

This risks poking a much bigger bear, a country armed with nuclear weapons and led by violent criminals. Posturing is to be expected, but one wonders if the Ukrainians are serious.

What is clear is that they are emboldened by their successes to date. Contrary to widespread expectation Kyiv did not fall to Putin’s troops, and neither did any of the country’s major cities; Zelensky’s government did not flee or collapse; Russia’s military was forced to stretch thin, has struggled with supply lines and is certainly embarrassed. Ukraine has also mobilized significant Western support and military supplies while Russia has come under tough economic sanctions. Ukraine has outperformed.

But there is another hand.

While swaths of Ukraine have been devastated and tens of thousands of people have died, Russia’s economy has not collapsed. That’s because the sanctions have not been global with China, India, Brazil and other countries essentially refusing to go along and making up for much of the lost trade with the West. This exposes the undignified limits of Western power and has allowed the the ruble, which initially plummeted, to roar back better that ever.

Moreover, Russia has managed to make the world pay, with inflation causing political mayhem everywhere, energy prices twitchy, and food shortages in Africa. Critically, Europe has no answer to its dependence on Russian natural gas, and so has refused to ban it; Putin is the one doing the banning, withholding gas supplies from a few countries that refuse to pay in rubles. Depending on a war criminal to heat your home while paying him in his preferred currency is no way to show anyone who’s boss; it is a great way to look like a chump.

Finally, despite a shambolic military performance Russia has occupied almost a quarter of Ukraine’s territory. It controls Donetsk and Luhansk, the regions heavily populated by ethnic Russians that were the focus of its insurrection-engineering since 2014, as well as the port city of Mariupol and other places.

If Putin were less demonic and perhaps more clever, he could very well declare victory and unilaterally end his “special operation.” He could hold rigged referendums in the occupied areas to “prove” the people there feel liberated and annex them as he annexed Crimea. The territory is contiguous and adjacent to Russia, mostly. The Russian people would be relieved for the war to end and would certainly accept the victory narrative: the world’s largest country, in its stupendous gluttony, has become a little bit bigger.

Ukraine might not go along with this — but for how long? Would they really keep attacking the occupied areas? Would the West keep arming and funding Kyiv if it acted in this way to prolong the war? Might it not pressure Zelensky to find another way?

There is a pretty good chance that the West would be secretly pleased at a pathway out of this catastrophe and would suffice with retaining the pariah status of Russia for as long as Putin is in power. Perhaps Ukraine could be pacified with a fast-track EU membership.

Part of the equation, for anyone being honest, is that the internal borders of the Soviet Union were purposely designed for chaos. Much like the colonial borders in Africa, they do not correspond as closely as they might to the true linguistic and ethnic dispersal of the population. Indeed, the Soviet Socialist Republics were saddled with minority populations intentionally, to make them less viable as independent states. Thus we ended up with Ukrainians in Moldova, Armenians in Azerbaijan, and Russians in the Baltics and also in … Ukraine.

It is very probable that many of the Russian-speakers who abound in eastern Ukraine do not actually want to join Russia — but that’s because the place is a benighted dictatorship; if it were not, they very well might flip. Letting them go may be in Ukraine’s interest, along a “demographic argument” similar to the one that compels many Jewish Israelis to want to get rid of the West Bank.

Even though this seems to suggest Ukraine’s loss of some regions might be the outcome and might not be preposterous, let me underscore that while it might emerge be a less-bad option to a prolonged and devastating war of attrition, it would also come with terrible danger. It is wrong to allow aggression to be rewarded and borders to be unilaterally changed by force, and it is a terrible idea to appease a dictator like the one operating in the Kremlin.

Attaching the title “dictator” to Putin is a little on the edge for someone who spent more than a quarter century at the Associated Press, working much of that time as an editor entrusted with enforcing its policies. The AP prefers to call even the most odious of global miscreants by their official title, at least if they represent a recognized country. The idea is that anything else is necessarily subjective and the borders are fuzzy, so it’s best to avoid loaded language and let the reader decide.

I still subscribe to that in most cases, but there are exceptions, and now that I am independent I can decide that this is one. To call Putin “president” is to miss the essence and to risk bestowing upon him some implied legitimacy in the eyes of readers who may not be inclined to read between the lines.

Putin’s main victim is, of course, Ukraine, which has suffered war crimes at a scale unseen in Europe since World War II. But close behind are the poor Russian people. Putin has taken their country from being a developing democracy to a flawed one and then a fake one and finally a dictatorship where people are disappeared for criticizing the regime. Their economy has taken unnecessary hits, they have been kicked out of sports and cultural events, and the Europeans are debating even banning them as tourists. They are becoming a pariah nation to a degree unseen since Nazi Germany, and never even approached by the Soviet Union.

The Russians are a great culture that deserves better than this brutalization by a man who stays in power by surrounding himself with an army of toadies who depend on the system he built for their stolen wealth and probably their very lives. Why do over 100 million people put up with it? Can fear be so debilitating for so many people? Can fake news be so effective?

Perhaps the 19th century Russian genius Ivan Turgenev (whose cantankerous but romantic novels I am currently completing) understood it best. He loved Russia but hated its politics and wanted to reorient its society toward Europe. Of “the Slavs” he said this (through one of his characters in the book “Smoke”): “Servile habits are too deeply ingrained in us. We will not rid ourselves of them in a hurry. Everywhere, and in everything, we need a master… By virtue of what we enthrall ourselves is deeply obscure, Such, evidently, is our nature.”

Turgenev was wrong about one thing: they are not the only ones.