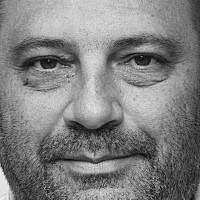 The Blogs
Hernan Kopcow
Apply for a Blog
Advertisement
Please note that the posts on The Blogs are contributed by third parties. The opinions, facts and any media content in them are presented solely by the authors, and neither The Times of Israel nor its partners assume any responsibility for them. Please contact us in case of abuse. In case of abuse,
Report this post.

A few months ago, I got an idea that I still don’t buy entirely but I have to admit that is a very interesting one. What if except for the fact that we are fighting, the current organization of the land is the ideal one by divine design?

There are in the Torah two events saving the lives of Ishmael and Isaac that have some similarities.

In the first one, Hagar, running away from Sarah with Ishmael, finds herself running out of water and fears that Ishmael may die of dehydration.

“Then G_d opened her eyes, and she saw a well of water. She went and filled the skin with water and let the boy drink.”

A similar expression appears in Akeida when Abraham sees the ram to be sacrificed in place of Isaac.

“When Abraham looked up, his eye fell upon a ram, caught in the thicket by its horns. So Abraham went and took the ram and offered it up as a burnt offering in place of his son.”

Making an analysis from an entirely  Jewish perspective the question is, what if we just have to look at things differently, to find out that the current situation with respect to the way the Land of Israel is organized is the actual solution?.

If one thing can be said of G-D is that is diverse. According to the way one approaches him is the face he will show.

As diverse as G-D is, is the Jewish people. There are religious Jews, secular Jews, agnostic Jews, atheist Jews, observant, non-observant Jews, Socialist Jews, Capitalist Jews, Reform Jews, Conservative Jews, Orthodox Jews, Chasidic Jews, Modern Orthodox Jews, Chasidic Jews of this dynasty, and Chasidic Jews of that other one, Chabad Jews, Breslover Jews, secular zionists, religious zionists, religious Jews that would not come to Israel until messianic times, and others that would not come to the State of Israel but yes to The Land of Israel… Jews of every color of skin and Jewscarrying with them the different cultures of the diaspora.

As diverse as G-D and the Jewish people are, so is the Land of Israel. If you like swimming or bathing in natural waters, you can do so in the waves of the mediterranean sea. In a relatively short time, you can also be swimming in the sweet waters of the Kineret, floating on the salted Dead Sea under warm weather even in winter, or scuba diving with corals and colorful fish in the Red Sea. All at a relatively short distance from one another.

Similarly, there are very spiritual areas: Jerusalem, Zfat, the Galilee and others thriving with technology and an economic boom. Places with modern secular lifestyles, others more religious. Fertile lands, deserts, hills, and planices. Cities where Jews and Arabs coexist without any segregation, as in Haifa and areas where the population is Jewish or Arab.

Economically, Israel is a thriving market economy in which there are integrated pockets of socialist cooperative organizations, the kibbutzim that were fundamental to the establishment of the State, and from which people started to move out in one generation.

Such is the diversity and inclusive nature of the State of Israel. A country where everything is possible. It needs to be so if, as Golda Meir once said to Richard Nixon: “You are the president of 150 million Americans; I am the prime minister of six million prime ministers.” It is a little bit messy, but it works.

I do not know anything about Islam to emit opinion, but being the case that religious texts often accept multiple interpretations, there should be at least one plausible reading of Muslim texts finding the current geographic organization of the land as the ideal one for Jews and Arabs to coexist peacefully by principle, not only by interest. It may be just a matter of their opening their eyes.

About the Author
Hernan is an Argentina-born scientist with a passion for Torah study. He holds a BS from the University of Buenos Aires, a MSc from the Weizmann Institute of Science, and a PhD from a combined program between the University of Buenos Aires and Harvard University. In the last years he taught at Yeshiva Ohr Ysrael in Boston and devoted time to the study of the influence of science and jewish sources
Related Topics
Related Posts
Comments