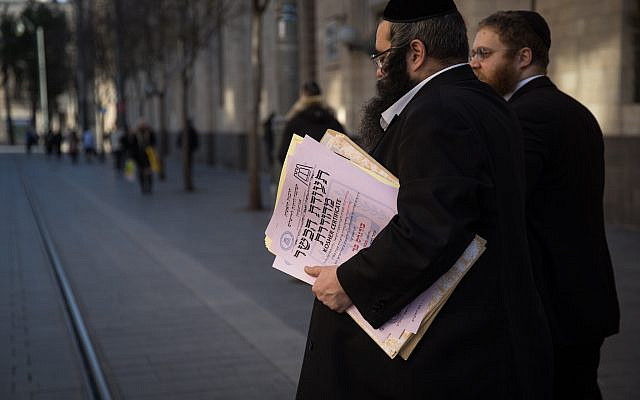 Representatives of the Chief Rabbinate of Israel deliver a Kosher Certificate to a local restaurant, in central Jerusalem, on December 31, 2019. (Hadas Parush/ Flash90)

Under the current kashrut system of the Chief Rabbinate in Israel, the possibilities range from food actually being kosher at best, to deception in many cases. The system functions somewhere between disorganization, to say the least, and outright chaos. There is also a jungle of private “Badatzim” (rabbinical courts) which results in a “double kosher tax” that all Israelis pay. So, the kosher reform promoted by Minister of Religious Affairs Matan Kahana is a revolution on a historic scale in the kashrut system, and, if implemented wisely, it will offer kosher food consumers reliable kashrut certification and lower prices.

Kashrut certification in Israel today is granted, by law, by the Chief Rabbinate. In practice, those who confer kosher status are the local rabbis who oversee the local kashrut system and set the halachic standards for its operation. Alongside them are many Haredi private courts (Badatzim) that provide additional kashrut certification beyond that of the Rabbinate, usually according to stricter standards.

The kosher market in Israel generates about NIS 3.5 billion a year. Most Jews in Israel (about 70 percent) consume kosher food exclusively and about 80% of food businesses hold a kosher certificate. Today, the Chief Rabbinate has a monopoly on kashrut under the law. There are also 20 Badatzim, which sometimes employ the Rabbinate’s kashrut supervisors, at tax-payer expense, as well as the “Tzohar” organization, which provides independent kosher status. Kashrut departments in the religious councils and local rabbis set the standards of kashrut, appoint the inspectors, and manage their operation.

The result of this decentralized structure is low-level kashrut and operational chaos, as reflected in state comptroller reports, High Court rulings, harsh investigative articles, and several criminal investigations. The standards for kashrut certification vary from city to city, the providers hire their own inspectors, and the supervision of inspectors is poor. The existing kashrut system hardly provides what is most important to almost all Israelis – kosher food at affordable prices.

The reform promoted by Minister Kahana is historic and embodies a promise of better, more reliable kashrut. Its cornerstones are the creation of a uniform set of kashrut standards, and the transfer of kosher certification to private entities to be supervised by the Chief Rabbinate.

Under the proposal, the Chief Rabbinate, or a panel of three municipal chief rabbis, will set the halachic standards of kashrut. Private bodies licensed by the Rabbinate will grant the actual kosher certification. The proposed structure would remedy most of the ills of the kashrut system: first, it would create an order — the menu of criteria for all links in the food chain would be uniform and not subject to the whims of local rabbis; second, each body’s certification standards would be transparent to consumers; third, the supervision of inspectors will be more significant and will increase the level of kashrut; fourth, competition between bodies would lead to lower certification prices; fifth, providers would not hire their own inspectors (as the High Court has long demanded), and their employment conditions would improve; and finally — the bizarre situation of three or even four kashrut hechshers on certain products, and the resulting high cost to consumers, would disappear.

The truth is, apart from the economic benefit and the reliability of kashrut, the reform will only strengthen the Chief Rabbinate and save it from itself. Instead of local rabbis engaging in managing kashrut, they will be freed up to spiritually lead their communities. On the national level, the Rabbinate will be significantly strengthened as it will supervise the certification process.

The reform is important in another aspect: after years of stagnation — and Haredi control in order to gain power, money, and jobs — religious services in Israel are now led by a minister who has the public’s best interests at heart. Kahana is ready to fight against a religious establishment that sanctified the status quo, – and it did so not out of pure motives. We should hope that this is only the first harbinger of many necessary improvements.

About the Author
Shuki Friedman is the Vice President of the Jewish People Policy Institute and is a lecturer of law at the Peres Academic Center.
Related Topics
Related Posts
Comments