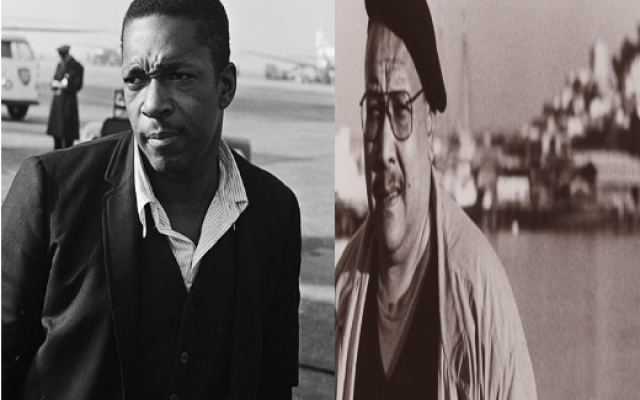 “Trane was searching for a particular tone on his horn; he had what he thought was a perfect embouchure, but his teeth hurt constantly, so he searched for the soft reed which would ease the pain,” writes American poet, Michael S. Harper, in the essay entitled, ‘Don’t They Speak Jazz’. Continuing on about the iconic ‘modern’ jazz musician, John ‘Trane’ Coltrane, Harper writes: “After searching for a year, each session killing his chops, he gave it up completely; there was no easy way to get that sound: play through the pain to a love supreme.”[i]

What the poet is saying is, the search for creative expression, in the face of pain, makes for great art. The record, ‘A Love Supreme’ (Impulse 1964-’65) by John Coltrane is a four-part vehicle for improvisation (with leitmotifs and themes), dedicated, like a musical psalm, to the worship of Divinity.

The first piece of the suite opens with the tenor saxophone playing soulful arpeggios in rubato timing. Abruptly, the rhythm section falls into a vamp, pivoting off a repeating and funky bassline (Jimmy Garrison). The soloist, Coltrane, plays the melodic theme before diving into exploratory improvisation, never losing the shape of said melodic theme. The rhythm section and the soloist build and build in intensity. At 4:44, Coltrane returns to the theme, performing it in various keys, superimposed over the non-changing bassline. At 6:05 the vocal chant begins. The song ends with first the piano (voicing chordal accompaniment) dropping out, leaving just bass and drums, followed by the drums dropping out, leaving just the funky bassline: the skeleton of the piece. (listen below)

Inside the original vinyl packaging, as well as on all subsequent reissues on all audio media considered, is a message addressed to the “listener” and a two-stanza prayer-poem written by the artist in December, 1964.

What blew Michael S. Harper away was that such sublime and dynamic music was made in the face of Coltrane’s agonizing dental problem. As Harper’s main instrument is his pen, “playing through the pain” is a silent mantra, shadowing over the poet’s entire oeuvre, as “a love supreme” is chanted during the ending of ‘Acknowledgement’, the first part of the Coltrane suite and recording (shared above). It is manifested in the subject matter of Harper’s poems. As an African American and a believer in history, cultural pain is no stranger to Harper. Therefore, his poems allude to this “cultural pain” often. He also writes much about the loss of two of his infant sons, another painful moment, and further he writes about jazz musicians such as John Coltrane whose music speaks on both collective cultural African American pain as well as physical pain, per Trane’s dental problems; (he also writes about Charlie ‘Bird’ Parker, who also was no stranger to the blues and medicated, perhaps the cultural pain he felt, with intravenous heroin). The cultural pain felt by African Americans, especially in the years surrounding Jim Crow and the gritty resistance to the Civil Rights Movement was enough to derail a Black or even liberal soul on the track of success and happiness. When we observe the slow assimilation out of the manacles of slavery, we realize this phenomenon.

In Michael S. Harper’s most well-known poem, ‘Dear John, Dear Coltrane,’ the speaker who is listening to Coltrane blow tenor on “A Love Supreme,” considering what biographical information he or she knew about the maestro and at times mimicking the music’s sound with nuances of prosody, writes in a departure from the subject’s personality and sound, “Loss, so great each black woman expects your failure…” (lines 16-17) This is a cultural statement about the attitude and determination of the African American individual, striving to achieve greatness, demonstrated in the vocal chant in the closing of the musical suite’s opening part, “Acknowledgment”: “A love supreme, a love supreme, supreme, supreme…” This is chanted by the four musicians like a call for help to their Creator, or simply a musical oblation—highly spiritual music—lost at sea in a storm of early-1960s American racism. And so indeed they are playing through the pain.

‘Dear John, Dear Coltrane’, was the title poem for a volume of the same name which was published by University of Pittsburgh Press in 1970 (after the poet was told upon rejection by Wesleyan University Press: “We already have our black book.”), and was a finalist for the National Book Award. Harper submitted the poem to a contest judged by Gwendolyn Brooks, Robert Penn Warren and Denise Levertov, and was a runner-up. According to notes that the poet sent me personally, when he was alive, in the summer of 2012, Brooks told Harper, on a piece of “immaculate peach paper”, he was her “clear winner”. The original title for the book was, Black Spring, according to Harper’s notes; and he always had trouble publishing the poem, ‘Dear John, Dear Coltrane’.

Early-’60s American racism is also the theme of Harper’s poem, ‘American History,’ in which the speaker compares four young Black girls, who were victims of a racially motivated attack on an Alabama church (the Baptist Street Church Bombing of September 15, 1963), to a group of African slaves chained in a net underwater in Charleston Harbor during the Revolutionary War. The bombing of the church inspired the heart-breaking, pathos-drenched, tour-de-force, Coltrane composition, ‘Alabama.’

The tune opens with the piano (McCoy Tyner) playing octave drones and Coltrane, on tenor sax, improvising some deeply bluesy and soulful lines. The theme comes in at 1:21, before the band crashes into a hard-swinging, bass-strutting, blues jam, with Trane soloing over the rhythm section. At 2:45, they repeat the introduction, which was just the piano drone, textures and colors from the percussion (Elvin Jones) and the saxophone playing the pentatonic scale with interspersed ‘blue notes’, before culminating in the theme, one last time to close out. (listen below)

This illustrates both Coltrane’s and Harper’s philosophy of the truth and importance of history (and America’s habit of staying—rather suspiciously—mum about its murderous and oppressive past). That they makes a song or poem, respectively, of this infamous incident (the Baptist Street church bombing of ’63) illustrates for us “playing through the pain.”

Some of the poems which Michael S. Harper wrote on the experience of the stillborn death of his two infant sons, an inspiration for “playing through the pain,” in the medium of poetry, features allusions to the Civil Rights plight. This unifies the hurt-ridden cultural experience together with the personalized individual, painful experience. For instance, in the poem, ‘Deathwatch,’ dedicated to “three sons— two dead, one alive” (lines 40-41) Harper writes, “Will you please tell us whether or not it is true that negroes are not able to cry?” (lines 52-55), citing a question put in a letter to post-Emancipation African American intellectual, W. E. B. Dubois. It is as if the death of infants by natural causes is just another incident of racism by some unknowable and mysterious force of hate that enslaved and raped the continent of Africa to begin with; or, at least, picks the delicate scab left one-hundred years earlier by the cattle whip—considering, the cultural pain the Black parents already feel.

What Harper does so well is he finds a way to incorporate these three sources of pain: cultural, personal, and physical, into his poetry, and he blends them all together using pain itself as the common denominator. It is no wonder why Harper, also a musician, relates so well to the music of John Coltrane. In ‘Dear John, Dear Coltrane’ he writes: “there is no substitute for pain: genitals gone or going, seed burned out…” (lines 8-10) It is Harper’s feeling that the key to playing the saxophone properly, comes through imagining the pain of impotence. If despite physical and personal pain, John Coltrane can produce music as beautiful as ‘Naima‘ or ‘A Love Supreme,’ ‘Alabama’ or ‘My Favorite Things,’ then Michael S. Harper learns what it means to “play through the pain,” and he can create poetry as exquisite as the poems mentioned, despite his own pain of losing children, or facing racial persecution.