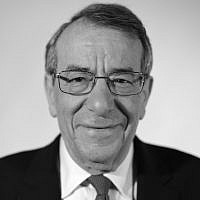 The Blogs
Ziad J. Asali
Apply for a Blog
Please note that the posts on The Blogs are contributed by third parties. The opinions, facts and any media content in them are presented solely by the authors, and neither The Times of Israel nor its partners assume any responsibility for them. Please contact us in case of abuse. In case of abuse,
Report this post. 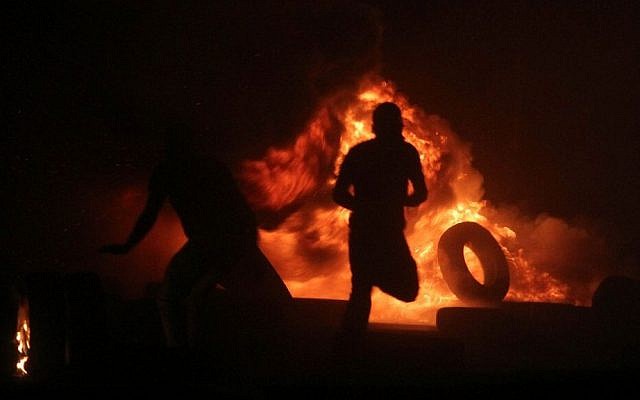 Illustrative photo of Palestinian men burning tires during clashes with Israeli border police at the Qalandiya checkpoint, between Jerusalem and Ramallah, late on July 24, 2014. (Issam Rimawi/Flash90)

Since the end of WWII, and the establishment of the State of Israel in 1948, the US has played a dominant role in decision-making and management of the Palestinian-Israeli conflict. The Oslo Accords were signed in Washington. Madrid Peace conference was organized and dominated by the US. The entire American landscape, beyond the White House, is sprinkled with venues of negotiations or agreements that hosted the peace process. Through war and peace the US has provided support and increasing authority to Israel throughout its history. This support has been bipartisan and popular for decades, but it is not impervious to the aggressively partisan American politics of today. The US has also kept the peace process between Israel and the Palestinians alive and left both sides eager to seek US support. Speculation that American dominance over the peace process might wane is, charitably speaking, idle at best.

The longstanding US position in support of a two-state solution has not officially changed but the reality on the ground, in the air and in cyberspace has. Prospects of a Palestinian state have steadily diminished but no substitute solution has emerged or been publicly adopted. Israel has not agreed on strategic answers to fundamental questions about land, demography, or citizenship, all of which have profound impact on final status negotiations. The US has not laid down its own vision or proposals regarding these issues or where they fit in a shared regional security regime. Palestinian official policy continues to demand an end to the occupation and the creation of a state. However, the dictates of reality are that Palestinian politics are deeply fractured and more starkly, the issue of Palestine does not top the Arab agenda as it once did. Israel’s polity is nowhere close to supporting two-states. Thus, regardless of US engagement, Israeli and Palestinian political realities and the fissures within them are at present incompatible with conflict-ending negotiations which would yield meaningful final-status results.

So, while there is no military solution to this conflict, it is crucial to note that decades-old negotiations have also failed to produce a solution despite several spectacular, high-profile attempts. It is time to be modest and to search for a less ambitious goal. At a time when both Palestinian and Israeli politics are fractured, the polarizing narratives on both sides have become the dominant ones (as evidenced by persistence of the zero-sum mindset), and the power disparity of the antagonists deepens, the present PA and government of Israel cannot agree on a negotiated solution. The world and the US will not impose one. But the absence of a negotiated conflict-ending solution does not mean that negotiations should not occur. The exact opposite is true. There is an urgency to negotiate issues that can open an indispensable path to peace and stability.

The time has come to seek a policy focused on removing the impediments to reaching an agreement. This policy is not about an interim agreement and must not preclude any future options. Let us call this the ‘managing the transition phase.’ The two parties cannot do this part by themselves even if they wanted to do so. They both require a partnership with the United States. The US has all the qualifications and the wherewithal needed for this phase. It has convened, facilitated, and helped implement all agreements about the peace process including those negotiated outside the US such as Oslo and Madrid.

Once the hard decision to postpone final status negotiations is made, all negotiations during this phase must focus on managing the transition. This means the negotiators need to identify, detoxify, ameliorate and adjust the present negative realities and mindsets that perpetuate conflict. This means reassessing the policies and practices that impact the quality of lives of the Palestinians. Beautifying the occupation is an odious concept. However, providing security, safety and better living conditions for the people is a noble objective and a rational strategy. The policy objective of this phase would be to prioritize and implement rule of law, good governance and accountable institutions, economic and trade cooperation and enhanced mobility. Palestinian good governance requires diligence, transparency, and oversight. In short it would enhance Palestinian people’s empowerment, a prerequisite for future stability. All this would have a significant impact on the lives of the Palestinian people as well as the politics of the Palestinians and the Israelis. The most effective weapon against terrorism is good governance. The sooner it is achieved, the better.

The occupation is incompatible with long term stability. Normalization, which is much reviled by many Palestinians and considered surrender to ‘beautifying the occupation,’ is actually a two-way street. To put it mildly, Palestinians do not lead normal lives under the occupation. Ending the coercive and humiliating contacts between the Israeli government and the Palestinians is a normalization that few Palestinians would find objectionable. Working toward establishing a constituency for coexistence, including one for a less hostile and more civil public discourse would help to discredit violence and its advocates. Having better health and educational institutions is not a peripheral issue to be resolved after final status issues are agreed upon. These are objectives that must be negotiated at the transition phase because Israel has an enormous impact on helping or hindering their outcome. It can steer the process toward peace and justice by allowing the paradigm to shift.

The Arab Spring has dramatically changed the region and we must recognize the new regional realities and their impact on this issue. Past assumptions and past policies might cloud the view to identifying and seeking new solutions demanded by the new regional realities. Conflicts and problems of all states in the region are interconnected and inter-digitated because everyone plays in everybody else’s court. Political terrorism will wreak more havoc before it is defeated. Strategic solutions, including a Middle East equivalent of NATO and a regionally funded Marshal Plan, remain as visions and plans to be realized. However, the vision of a Middle East open for all its people is less of a dream limited to the idealists and more of an arena of discussion by policy makers and security experts. The Middle East will continue on its present tragic trajectory unless it belongs to a security regime that stabilizes the region and paves the way to its development and prosperity. Statesmen of vision must find their way to build an international alliance to make this possible. Post WWII Europe provides such an example. All member states, including Israel and the future Palestine will share the benefits of such a regime

About the Author
Ziad J. Asali, MD is Founder and President of the American Task Force on Palestine (ATFP), a non-profit non-partisan organization established in 2003 and based in Washington, DC. Dr. Asali was born in Jerusalem and graduated from the American University of Beirut (AUB) medical school in 1967. After retiring from practicing medicine in Illinois in 2000 he moved to Washington to advocate for peace in the Middle East through two-state solution.
Related Topics
Related Posts
Comments