So I saw this graffiti in my Jaffa neighborhood and it really gave me pause. What would we do if there weren’t any wars? 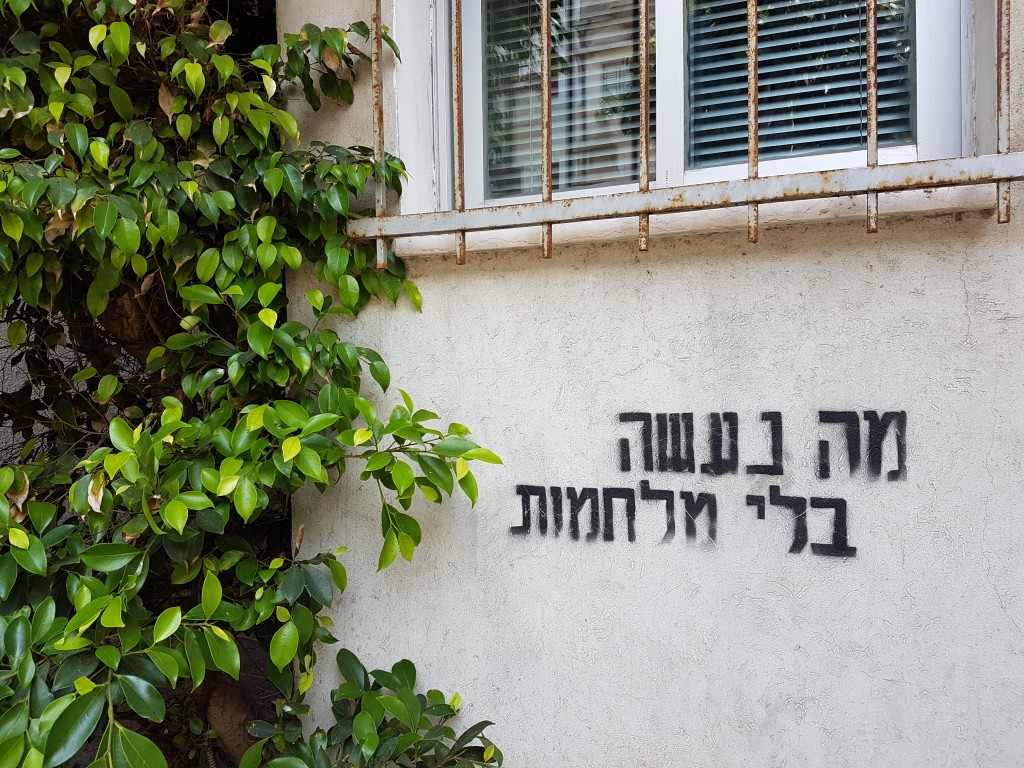 But the question was in Hebrew. What would we Israelis do if there weren’t any wars? What would I do? What would my friends and family do?

I thought about how different my answers would be than those of Jews in the Diaspora and how similar they would be to those of other people in war zones around the world.

I thought about the soldiers I have known and loved who at many points in their lives would answer that they would simply go home, take a shower, and eat their mother’s mafroum or maklouba or Jerusalem kugel or chocolate chip cookies. Or go home and make a baby.

I wondered what the mothers who gazed into their newborn sons’ eyes would see if they didn’t wonder if and when and how their sons would go to war; what other reasons mothers would find to thank God that their newborn daughters were girls.

I thought I would speak Hebrew to my children on the Paris Metro. I would visit the holy sites in Bethlehem with neither fear nor guilt. My grandson would pass on gifts to my offspring that were untainted by the epigenetic PTSD that comes from whatever war follows the Holocaust, two wars in Lebanon, the Gulf War, Operation Protective Edge, and too many terror attacks to count or remember.

I thought that fog in the morning would arouse childhood memories of little cats’ feet creeping over the Golden Gate Bridge rather than concern for my friend Adele Raemer, who lives on a kibbutz bordering Gaza where misty weather evokes Ismail Haniyeh’s missiles rather than Tony Bennett’s heart.

I thought about tourists flocking to Gaza’s stunning beaches and locals stringing Ramadan lights on their houses that could be seen from space. I thought about North Koreans scarfing down Kobe beef and Syrians schussing down Mt. Hermon. I thought about Americans spending their big fat peacetime tax dividends on bigger houses, bigger TVs, bigger brunches, bigger burgers, and better healthcare.

But if no one over the age of 10 can even visualize what they would do today if there were no wars than how can we get there? And if it’s such a dumb question, why don’t the smarter folks out there just answer it? And if the Messiah really is the answer, why not prepare by planning ahead what you would/will do when all this peace descends.

So I’m asking you. Seriously. What would you do if there weren’t any wars?

About the Author
Varda Spiegel was Nurse-Director of the Bedouin Mobile Unit of the Negev, later serving as Maternal-Child Health Director for the Ministry of Health Jerusalem District. I was the English Web Content Manager for the Israel Museum and have translated from Hebrew to English for Haaretz and the ANU Museum of the Jewish People. I'm a grandmother, mother, and beachbum.
Related Topics
Related Posts
Comments