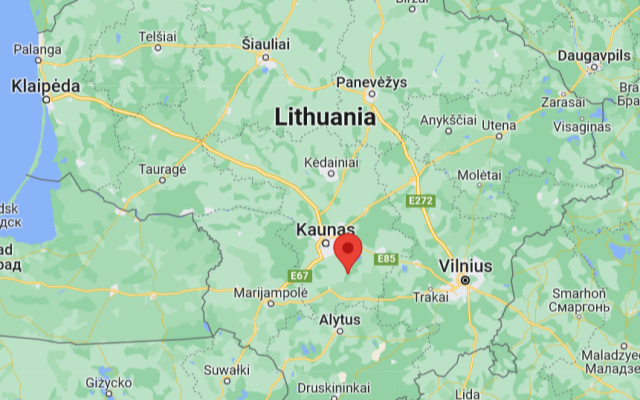 Related by Yosef Gar, born in Kaunas in the year 1905. A journalist by profession. Education: graduated from the teacher’s seminary in Kaunas. Lived in Kaunas until the war broke out on June 22, 1941. Father’s name Dovid. For the entire time up until the war, Yosef’s mother Esther lived in Kruonis with Yosef’s brother Yakov.

Kruonis is located forty kilometers from Kaunas, on the highway between Alytus and Kaunas. It is twenty kilometers from Kaishiadorys. Kruonis belonged to Kaunas county. About a hundred families lived in town, including twenty Jewish families. Most of the Jews in town were occupied as retail merchants, and a few of them were in agriculture.

The town had a synagogue and a small library. Most of the Jewish youth were Zionists. The attitude of the Lithuanian population toward the Jews was relatively good.

Throughout the period of the German occupation, Yosef Gar lived in the Kaunas ghetto, experiencing all the suffering of the Jews in the ghetto together with his wife and child. When the few surviving Jews of Kaunas were evacuated to Germany, Gar and his wife Rokhel jumped out of a fast-moving railroad car, on July 12, 1944. They wandered through the fields and forests for eighteen days. They were liberated on August 1, 1944 by the Red Army near Pilvishkiai.

On their way to Kaunas after the liberation, the following August, Gar and his wife stopped in at the town of Kruonis, where his mother and brother had died. Gar found one surviving Jewish family named Volpe in town, consisting of the mother Khane, her fourteen-year-old daughter Sheyne, Khane’s sister and the sister’s little boy. ‘The Jewish family, as well as peasant friends, told Gar as follows about the slaughter of Jews in the town.

The Germans entered the town on Tuesday or Wednesday, June 25, 1941. The Jewish families lived in their own homes until the first days of July 1941. No excesses were committed. Nor did the Germans take any particular anti-Jewish measures. Indicative of his was the fact that Gar’s sister in law Bayle Gar worked for a time as a translator for the Germans.

All the Jews in Town Interned in a Barn

On the seventh or eighth of July 1941 all the Jews, men, women and children, were arrested. They were kept in a barn guarded by Lithuanian partisans. The houses and farms were abandoned. Several days later the women and children were freed. Only the men were kept interned in the barn. On July 13, 1941 Gar and his wife passed by Kruonis on the way to Kaunas. When he entered the town, he met a Jewish woman named Rokhel Lurya (born Rosenberg) from Kruonis, who told Gar that all the men had been arrested.  She told him that women and children had been arrested along with the men, but they had been released several days previously.

On the way to his mother’s house, he and his wife were arrested by two Lithuanian partisans next to the house. One of them was the leader of the partisan bandits in town, Arlauskas, a son of a peasant outside of town, and the other was Malinauskas, a Lithuanian from town.

They forbade him from staying in town, because his papers stated that he and his wife were permitted to go to Kaunas. Finally Gar managed to convince them to let him spend the night in the barn together with the arrested men. But before opening the gate of the barn to let him in, the partisans changed their minds, and Gar and his wife were taken away to the highway leading to Kaunas.

Later on the men were also released from the barn. After the men were released, the Jewish family Perlshteyn from town (the husband Lipe, the wife Khane, daughters Khaye and Rokhel, the sons Alter and Hirshe, all grown men) were murdered one night. The murder was committed by a Lithuanian from town, the farmer Juozas Bileishys, with whom the victims had disputes over land before the war.

At the same time two young Jewish men, brothers named Moyshe and Yakov Rosenberg, were also murdered. After these murders most of the Jews left the town, and settled at the homes of peasant friends near Kruonis. At the end of July or the beginning of August there was a decree stating that all the Jews had to come to town in order to move to the nearby town of Darshunishkis, where a ghetto was supposed to be prepared for the Jews.

In Darshunishkis the Jews were badly mistreated, with respect to food, at work and so forth.

On August 15, 1941, on the Catholic holiday of Zholynes, when Christians from the surrounding area gathered at the church in Darshunishkis, the Jewish men were taken away from Darshunishkis in trucks. No one said where they were taking the men. The alibi was that they were being taken to work. Among the men taken from Darshunishkis was a Jew from Kruonis named Dovid Tkatsh, who was elderly and had a limp. He asked the partisans why he was being taken to work, even though he was incapable. The partisans answered: “You’ll only make coffee for the ones who work” (Khane Volpe relates this).

According to later information, the men were taken somewhere near Kaunas and shot there. It was said that the men were supposed to have been shot in the Kamenduliu forest, not far from the Pazhaisliai monastery. It was also suspected that they were shot at the Seventh Fort near Kaunas.

The only ones left in Darshunishkis were the women, children and elderly. At the beginning of September 1941 the Jews learned that something was going to happen to them in the near future.

On September 3, 1941 all the Jews in the Darshunishkis ghetto were shot at the Jewish cemetery.  The sick and the elderly were thrown into the pits alive. (reported by Khane Volpe).

A short time before the executions the partisans severely tortured the Jews to get them to say where they had hidden their gold and other valuables. Thus, for example, the Kruonis Jew Shloyme Akhitovits and his wife were murderously beaten. The woman was brought from Darshunishkis to Kruonis and beaten terribly there so that she would show them where they had buried the gold (told by Khane Volpe).

Gar’s sister-in-law, Beyle Gar, escaped from Darshunishkis together with her child. The partisans found out, chased her, caught her, and after beating her murderously, brought her to the execution. She too was tortured in an attempt to get her to show where she had hidden valuables.

Shortly before the execution, the family Volpe from Kruonis found out what was in store for the Jews in Darshunishkis, and a certain peasant kept them in hiding throughout the entire German occupation. The husband Moyshe Volpe stayed with one Christian, while his wife and child, her sister and the sister’s boy stayed with another Christian. The women and children survived. Moyshe Volpe was shot by a peasant from a village near Kruonis with whom he had secured valuables, when he went to the man’s house to ask for something. The peasant’s name is Sadonis.

The Death of the Pakuonis Jews in Darshunishkis; The Tragic Accounting

About ten Jewish families lived there. The Jews of Pakuonis, who had been brought to the Darshunishkis ghetto as well, shared the fate of the Jews of Darshunishkis and Kruonis.

A Jew from Pakuonis named Frenkelshteyn, who had a business selling instruments for dental technicians in Kaunas, was in Pakuonis when the occupation began. The Lithuanian police chief of Pakuonis, with whom Frenkelshteyn had good connections, warned him one day that an action was being prepared against the Jews, and advised him to escape from town. Frenkelshteyn hid for a certain time in the region of Pakuonis, and then he made his way into the Kaunas ghetto, where he died during the liquidation in July 1944.

During the military operations in Lithuania in the year 1944, the town of Darshunishkis was completely destroyed in the bombing. The front stopped at the Nieman. The Soviet army, which massed at the river, was heavily attacked by the German army. The town was destroyed during these battles.

Later the local Christians unanimously insisted that it was a punishment from heaven, because innocent Jews had been tortured and killed in Darshunishkis. The town of Kruonis was almost totally undamaged. The town of Pakuonis was also badly damaged during the military operations.

Everything written about the slaughter of the Jews in the towns of Kruonis, Pakuonis and Darshunishkis (in the Darshunishkis ghetto) was related by me, Yosef Gar, to Leyb Koniuchowsky, and I attest thereto with my signature on each and every page.

The English language translation is as follows:

-New problems and worries for the liberated men and women. –

-The life of the surviving Lithuanian Jews during the first years of the last-remnants.