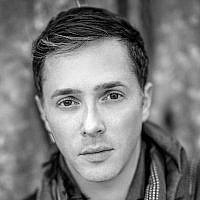 Acting is an artform and a creative mode of communication. It is a creative form of expression, sharing inner emotions and a new reality, intimately sharing a genuine truth through the artifice of performance.

Acting is powerful action, allowing for the performer and audience to experience and communicate the character and the story. This philosophical understanding of acting inspires me in my every role, but it also inspires my work and efforts within social and political activism.

Working in entertainment and media provides a platform beyond my creative work as an actor, host and filmmaker. It provides a platform for advocacy, whether that be standing up for the marginalized LGBTQ people internationally, fighting against Jew-hatred, or affecting legislation toward the protection of all people.

Being an actor affected my work as a host and interviewer, and as a director and filmmaker. I treat my characters with sensitivity and respect, and also give them a freedom of expression.  Every part of me is used in my performances, my tools as an actor are all of me, my thoughts and physicality together convey the message of my character.

As a director, I want my actors to feel that same freedom and to dive deeply into their characters. In the documentaries I direct, when I interview the subjects in the film, I create that same safe space for them to open up and share authentically. But you see, that is not only for those who are on camera – every crew member throughout the production process is a storyteller and is integral to how we share a narrative and respect the people and themes being shared within it.

How can I address these stories with consideration of who they are about and who the intended audience is? How can I affect change, increase awareness, and actively advocate utilizing my approach as a storyteller?

These are questions I ask myself, but I also challenge other creatives to do the same through their work. Beyond that, in workshops, meetings and collaborations with activists, advocates and socio-political leaders, I utilize the same questions to focus and refine their initiatives and approach.

My work and craft in entertainment and media provides a platform for me to represent myself, the communities I am part of, and the causes I believe in. Not only do I portray other characters and other people’s narratives, I am the storyteller – that position is unique.

I cannot completely disappear in the characters, because I will always still be me. For most of my career, people would refer to me as a chameleon-actor, in that I have acted in wildly diverse roles, have a wide-range, speak multiple languages and specialize in accents and character work. Even though I enjoyed that and was complimented for my ability, what was always important for me to recognize was the fact that what set me apart from all the other actors was me.

That is a concept that further enhanced how I use my platform as an actor, and thus as a director and host, as a way of not only sharing characters and narratives of those characters, but I am also sharing myself and why I deem the character and story important and compelling.

I am a proud Jew. Being Jewish is a major part of my identity. I celebrate it, and my Jewish identity influences everything I do, just as the main parts of anyone’s identity affect all they do. It is great to have my work presented and celebrated across film, television, radio and theater.

Feeling appreciated and seen is marvelously empowering. While doing so, I receive comments not just about my work, but also about who I am as a person. Oftentimes, people celebrate my identity, yet sometimes, I feel the wrath of Jew-hatred.

Receiving hateful messages across social media or at live events when I am speaking is challenging. It shows me there is a bigger issue at hand. I often share my personal experiences when meeting with elected officials, diplomats and leaders in both the LGBTQ and Jewish communities.

There are too many marginalized individuals who do not have a proper support system or the experience with how to respond to hate.

It is my duty, just as the duty of every social justice warrior, to support and empower those who are coming under attack.  Living beyond victimhood and towards resilience is vital, and if I can lead others to doing so, then that is a social justice success.

Social justice and civil rights movements are necessary for marginalized and victimized communities to empower themselves and gather the unity of their supporters.

Yuval David is an Emmy-nominated actor, director and filmmaker who has won over 100 international film festival awards. He is an active leader in the LGBTQ+ and Jewish communities, including as the director of mobilization for the End Jew Hatred movement. He is active across social media, including YouTube, Instagram, Facebook, and Twitter.

About the Author
Yuval David – Biography Actor, Host, Filmmaker, Advocate and Activist Yuval David is a celebrated and award-winning actor, host, director, and filmmaker. His creative mantra "to entertain, uplift and inspire" shapes his approach to “storytelling with boldness, vulnerability, and authenticity in representing characters and narratives.” As a filmmaker, Yuval directs, writes, and produces feature length and short films, documentaries, web-series as well as digital and episodic TV content. He currently is directing a feature length documentary that already has been getting industry and media buzz, even before it is released. Yuval’s series, “One Actor Short” have become an award winner and festival favorite, earning more than 75 awards from national and international festivals, including American Picture, Atlanta Film Festival, The Big Apple Film Festival, Global Webisode Festival, NYC Independent Film Festival, New Filmmakers Film Festival, Hollywood Just4Shorts Film Competition, IndieFest, Prague International Film Festival, Top Shorts Film Festival, and Vegas CineFest International Film Festival. Yuval’s other narrative and documentary films and episodic series, including web-series, have also been awarded numerous awards, including Best Film, Best Short, Best Series, and for Yuval specifically as Best Director, Best Actor, Best Producer, and Best Writer in national and international film festivals. As an actor, Yuval plays leading roles in film, television, theatre, web and digital media, as well as voice overs. His acting roles include leading and guest star roles on NBC, ABC, CBS, Showtime, Disney, DreamWorks, Comedy Central, countless independent films, Broadway, Off-Broadway, theatres across the US and abroad, including film festivals and theatre festivals. Yuval has dazzled audiences with his roles on hit television shows, including “Madam Secretary” (CBS), “The Michael J. Fox Show” (NBC), “Days of Our Lives” (NBC), and “What Would You Do?” (ABC), “Unforgettable” (CBS), and “The Plot Against America” (HBO). Yuval’s leading and supporting roles in films include “Beauty and the Beast,” “Nephilim,” “Incipient,” “Awakening of Spring,” “You,” and “The Fifth Estate.” His acting roles in theatre range from contemporary to classic theatrical works, including: Broadway in “The Game;” Off-Broadway in “Romeo and Juliet,” “Leaving an Impression,” “Daddy Issues,” “Bunburry,” and “In The Swing.” As much as possible, Yuval enjoys performing in regional theatres across the United States and abroad, in addition to international theatre festivals. Yuval regularly does voice overs for animation, commercials, narration, documentaries, and industrials. As a TV host and presenter, Yuval focuses on societal, humanitarian, food, travel, cultural and entertainment programming. His work is seen on network television, documentary films, web series, and regularly at live events. He also regularly is a host and MC for special events, galas, and advocacy events for social and political initiatives, institutions, and organizations, especially those focusing on US, Israel, LGBTQ, Arts, Humanitarian, and Cultural causes. In addition to his work in entertainment and media, Yuval is a passionate advocate and activist. Advocacy for the marginalized and under-represented is a driving force, along with his focus on Jewish, LGBTQ, humanitarian, arts and creative initiatives. He uses his creative work as a vehicle for the greater good on behalf of highly respected American, Israeli, and international organizations. Throughout Yuval’s advocacy work with organizations, he is brought in as a keynote speaker, workshop leader, and panelist for discussions regarding: -Art for Social Change -Creative Advocacy -Identity Politics -Marginalized identities and self-empowerment -Jewish Identity -Zionism & Israel -Jewish representation in Entertainment and Media -Jewish, Zionist, and Israeli advocacy within Progressive movements -LGBTQ Identity and Representation -Content Creation -Self-Expression and Self-Empowerment -Storytelling within Entertainment and Media Yuval advocates for all marginalized communities through his creative work and social action, supporting the organizations below. - Embassy of Israel to the United States: Keynote Speaker. - Consulate General of Israel in New York: Speaker, Panelist, and MC for events and initiatives. - Shoah Foundation: Speaker and panelist for events and initiatives. Member of the Creative Council, expanding the reach through new content creation incorporating testimonies filmed by The Shoah Foundation. - Jewish National Fund: Host & Director of Documentary Content, Speaker and MC - Jewish Council for Public Affairs: Speaker and Event MC. Host of video content. - Keren Kayemet: Speaker and panelist. - Stand With Us: Narrator and Host of documentary videos and social media content. Speaker and Panelist. - American Israel Cultural Foundation: Member, Performing Artist, and Speaker - Chabad: Speaker and Panelist. - The Jewish Learning Institute: Speaker and Panelist. - End Jew Hatred: Keynote Speaker, Workshop Leader. - Zikaron BaSalon: Keynote speaker, Advocacy Partner. - JewBelong: Speaker. Member of Board of Directors. - The Aguda, the Israeli LGBTQ rights organization: speaker, panelist, and host of events, including advocating on joint initiatives. - A Wider Bridge: Speaker, MC, and advocate for the organization, connecting Israeli and American LGBTQ communities. Member of the Leadership Council. - National LGBTQ Task Force: Speaker and Workshop Leader at annual Creating Change Conference; Advocate and Speaker at numerous events, including advocating to elected officials about LGBTQ initiatives; National Leadership Council; Host and Director of Documentary Video Content. - GLAAD: Partner for advocacy initiatives in press/media. - Lambda Legal: Speaker and host - Covenant House NY: Speaker at events for homeless youth. - Rainbow Railroad: Organizational Ambassador, advocating on behalf of LGBTQ people in need of rescue. - Freedom House: Advocate and actively aiding in helping LGBTQ people and other marginalized people escape persecution and human rights atrocities. - The Giving Group Community: Founding Member. Philanthropy connected to Israel. - Guest speaker, panelist, and workshop leader for Jewish organizations. Please find samples of his advocacy work and speaking engagements below: Advocacy. Speaking clips. Jewish and Israeli Causes. LGBTQ Causes. Social Journalism. You can view more on Yuval and his work at these links below: www.YuvalDavid.com YouTube.com/YuvalDavid Instagram.com/Yuval_David_ Facebook.com/YuvalDavid Twitter.com/YuvalDavid IMDB.me/YuvalDavid Linkedin.com/in/yuval-david Tiktok.com/@yuval.david joinclubhouse.com/@yuvaldavid
Related Topics
Related Posts