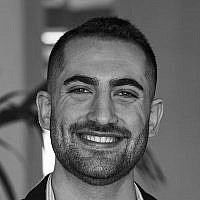 The Blogs
Tom Yohay
Apply for a Blog
Please note that the posts on The Blogs are contributed by third parties. The opinions, facts and any media content in them are presented solely by the authors, and neither The Times of Israel nor its partners assume any responsibility for them. Please contact us in case of abuse. In case of abuse,
Report this post.

In November 2020, I had the opportunity to attend a three-day online conference courtesy of BDS activists at New York University (NYU). For those that don’t know, BDS (boycotts, divestment and sanctions) is a radical movement that targets Israel over false allegations of oppressing Palestinian in the West Bank and Gaza Strip. The event was attended by impressionable students for various countries like the USA, South Africa, Chile and Italy. I hoped (somewhat naively) to hear pertinent discussions about the nature of the conflict, but quickly learned the conference was a mere platform to spread lies and hatred. In the conference, “substance” was nonexistent and inciteful rhetoric was commonplace.

The moderator for day 1 of the conference was Dr. Rafeef Ziadah, a Palestinian academic who studied in Canada’s York University and was born in Lebanon. Yes, the same Lebanon whose citizens, including Palestinians, have been suffering for decades from Hezbollah’s leadership. Unfortunately, it seems that the anguish of Dr. Ziadah’s people at the hands of one of the Middle East’s most infamous terrorist organizations warranted no attention.

Instead, Dr. Ziadah claimed that the Palestinians were suffering from Israel’s colonial enterprise. However, the fallacy of “settler-colonial Israel” is easily debunked. Indeed, an abundance of historical and genealogical evidence prove the Jewish peoples’ indigeneity to the land, having maintained a presence for over 2,000 years.

Furthermore, Dr. Ziadah did not care to explain how after extensive resources were bestowed upon the Palestinian Authority by the international community, the PA has not succeeded in establishing the requisite institutions necessary for a functioning democratic government. One of the reasons for this is rampant corruption at the top levels of Palestinian leadership who use the money for their own selfish purposes instead of the betterment of their people.

During the panel, the idea of boycotting Israeli academic institutions was raised. This counterproductive idea pays no attention to the increasing number of Arab students who could be harmed by the decision. In fact, between 2010-2019, the proportion of Arab students on Israeli campuses rose from 13.1% – 18.1% in first degrees, 7.4% – 14.6% in second degrees, and 5.2% – 7.0% in PhD’s. Therefore, boycotting Israeli universities would also effectively boycott Arab students (and lecturers) in these institutions. Yet, for BDS activists, boycotting apolitical institutions means more than the wellbeing of Arab-Israelis.

Another speaker at the conference was Jeremy Phillips, a South African student and former Chairperson of the Palestine Solidarity Forum at the University of Cape Town, who mistakenly claimed that there is no freedom of expression on Israeli campuses. In fact, not only do Israeli campuses allow complete freedom of expression, but they even allow for students to call for an intifada (violent uprising). I would have expected Jeremy, as a South African, to understand the difference between true apartheid and the current situation in Israel. Jeremy is more than welcome – free even – to come visit Israeli campuses and witness these freedoms himself.

Drashti Brahmbhatt, another panelist at the conference, organized a campaign to divest from companies “complicit in Israel’s apartheid and occupation,” during her studies at Brown University. The campaign is nonsensical, since as of March 2020, 87,000 Palestinians possessed permits to work in Israel. Brahmbhatt seems to forget that on one of the few occasions that BDS succeeded, it harmed dozens of Palestinians who lost their jobs at Soda Stream when its factory was moved out of the West Bank. Additionally, Brahmbhatt claimed that Israel expelled Arabs from their land during Israel’s War of Independence in 1948, but according to Professor Benny Morris, a world-renowned scholar and historian of the Israeli-Palestinian conflict, there was no “master plan” to expel Arabs:

“The Yishuv did not enter the 1948 war with a master plan for expelling the Arabs, nor did its political and military leaders ever adopt such a master plan. What happened was largely haphazard and a result of the war.”

Professor Morris elaborated that “most [Arab] villages and towns simply emptied at the first whiff of grapeshot” and that “a far greater proportion of the 700,000 Arab refugees were ordered or advised by their fellow Arabs to abandon their homes than I had previously registered.”

One of the most problematic elements of anti-Israel conferences like these is the legitimization of hatred on campus. These conferences utilize propaganda to brainwash impressionable students in prestigious universities like Harvard, Brown, Columbia, who go on to serve in influential positions within the United States. At this NYU conference, I witnessed empty slogans devoid of substance. My hope is that in the future, these activists will understand that the best way to help the Palestinians is cooperation with Israel, and not fighting against it.

This article originally appeared in Hebrew at Zman Yisrael, the Times of Israel’s sister publication. You can read the Hebrew version here.

About the Author
Tom Yohay is a CAMERA on Campus Fellow at the Ben-Gurion University in the Negev, where he is pursuing his BA in Politics and Environmental Studies, and also serves on the university’s student council. Tom is the Head Recruiter for Sela (students for workers), an organization which promotes workers rights and community-based initiatives. He also interned for Lobby 99, an NGO aimed at promoting the interests of the public in the Knesset and the government, and was the Head of event and finance for Model UN at his university.
Related Topics
Related Posts
Comments 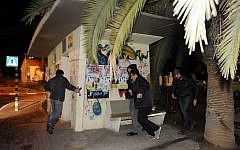