The passage of the Nation State law as a Basic Law that enshrines Israel as the “national home of the Jewish people” has raised concerns that its provisions are discriminatory towards Israel’s non-Jewish minority, and has put special focus on the Druze citizens of Israel. This community is subject to Israel’s mandatory draft and many Druze soldiers serve alongside Jewish soldiers in many of the IDF’s elite units. The new law, however, has made members of this community – as well as Circassians, Bedouins, and Israeli Arabs as a whole – feel that they are now being viewed as “second-class citizens.”

Last Thursday, the Jewish Federations of North America stated that it stands “shoulder to shoulder” with the Druze community. In Israel, tens of thousands of people, Druze and Jews, stood side by side in Tel Aviv’s Rabin Square on Saturday night to demonstrate against the law and called for steps that will guarantee equality for Israel’s minority citizens.

Throughout the protests, emphasis has been put on the Druze and Jews as “brothers in arms” bound by a “covenant of blood,” as members of the Druze community are prepared to sacrifice their lives in defense of the State of Israel. For almost 50 years, though, a story has been told in my family that emphasized that the ties between the two communities are actually those of extended family. This story is a musical mystery tale told by my father, Velvel Pasternak, a world-known authority on Jewish music and a masterful storyteller. I bring it here as he tells it, in the hopes of illuminating how far back the bonds between our two peoples go.

Misirlou: A Holy Nigun, as told by Velvel Pasternak

In 1969, I prepared to spend a year in Israel doing research on Hasidic music. Prior to my departure, I received a tape recording from a group of Bratslav Hasidim in Jerusalem, who wanted advice regarding nigunim (wordless tunes) they hoped to include in a forthcoming recording project. I listened to the tape, wrote some notes, and made several suggestions.

Just before the reel ended, I heard a group of men singing “Misirlou,” an internationally known melody that I knew to be a folk tune originating in the Mediterranean basin. My first reaction was to think that the tape had not been properly erased before the Hasidim began recording. When I made this suggestion in my return letter to the Bratslav head office in Jerusalem, the Hasidim hinted that my knowledge of Hasidic music was lacking. Bratslav Hasidim, they explained, had sung this melody for generations and it was considered to be a “holy nigun.” I was puzzled, and assumed they must have information I did not have.

The earliest known recording of Misirlou (Greek for “Egyptian girl”) by Tetos Dimitriadis, New York, 1927. A recording by Mike Patrinos from 1930 can be found here.

I arrived in Israel with my family in October 1969, and began collecting and annotating music for a second volume of Songs of the Hasidim. Within a month, I received a telephone call from Rabbi Meir Shimon Geshuri of the Jerusalem Institute for Religious Music. An acknowledged expert in Hasidic music, Rabbi Geshuri had created a large catalog of nigunim, and wanted me to review its musical transcriptions and authorships. I was flattered.

Several weeks later, I spent several days at the Institute, scrutinizing transcriptions on hundreds of index cards, each of which contained the first four bars of a melody and the name of the Hasidic group from which it originated.

After several hours of correcting inaccuracies in notations and attributions, I picked up a card that contained the first four bars of Misirlou and credited the tune to Bratslav. I took the card to Rabbi Geshuri and asked him why the authorship was assigned to Bratslav. He shrugged his shoulders, replied in Yiddish “ich veys nisht” (I don’t know), and went on with his work. The mystery of Misirlou remained unsolved.

A month later, the music library of the Hebrew University of Jerusalem asked me to volunteer my services to review their music catalog as well. Two weeks later I again found myself examining hundreds of cards in Jerusalem. During the third afternoon, I found a notation of Misirlou, again credited to Bratslav. I showed it to Dr. Avigdor Herzog, the director of the music archives, and told him that this was the third time I had come across this “Bratslav nigun.” We both knew that it was not a Hasidic melody. Why was it being credited to Bratslav?

Looking carefully, we saw an asterisk that led to a footnote that attributed the song to the “songs of Meron.” Dr. Herzog explained that each year on the seventh day of the Hebrew month of Adar, the yahrzeit (anniversary of death) of Moses is commemorated in the Galilee town of Meron. This practice stems from the fact that the burial place of Moses, according to the Bible, is unknown; as a result, it is impossible to have a memorial ceremony at his graveside. According to legend, Meron is the burial place of Rabbi Shimon Bar Yochai, a direct descendant of Moses. The Hasidim of Bratslav therefore felt that the crypt site of Rabbi Shimon would be the best place to honor the memory of Moses. In the early part of the 20th century, hundreds of Bratslav Hasidim, accompanied by klezmer musicians, began to celebrate the yahrzeit of Moses at the crypt of Rabbi Shimon bar Yochai with festivities, song, and dance.

This arrangement of Misirlou, recorded by Dick Dale and His Del-Tones in 1962, was covered a year later by the Beach Boys, and eventually became the theme of Pulp Fiction

My friends and colleagues encouraged me to go to Meron on the anniversary of Moses’ death in the hopes of solving the mystery of Misirlou. In 1970, the seventh of Adar fell on a Saturday evening. We stayed in Safed for Shabbat and travelled the short distance to Meron after Shabbat ended. We waited for the Hasidim to arrive. Those from the northern part of the country arrived first; those from the south came last.

By 11 p.m. the festivities were in full swing. The singing picked up and the dancing was exhilarating. I waited anxiously, ready with my portable recording equipment. At 12 a.m. the great moment arrived: the Hasidim began to sing Misirlou with vocalized “ya-ba-ba-ba-bai-bai” syllables. At last, I thought, I may finally get an answer!

Hasidim light a bonfire at Meron and sing as they celebrate the anniversary of Rabbi Shimon Bar Yochai’s death on Lag BaOmer, 2016

The first Hasid I asked told me this wordless nigun had been part of the Bratslav musical repertoire since the turn of the century. The second, third, and fourth provided me with similar answers. My frustration was growing, and I feared that my musicological query might remain unsolved. Several more attempts elicited the same responses.

The singing was beginning to abate when I saw a rather tall, distinguished looking Hasid. I hurried over to him and asked if he could give me any information about this tune. “Why do you ask?” he said.

I informed him that I did research and recording in Hasidic music.

“You are the first to ask,” he responded.

He motioned that I should follow him out of the crypt area. “Did you study in a yeshiva in the United States?” he asked.

“Then this should be rather easy for you,” he continued.

“I haven’t the slightest idea,” I responded.

“But you went to a yeshiva!”

“Please do not test my Judaic knowledge at this time of the morning,” I begged.

“All right, he said, “the Druze are descended from whom?”

“And who was Jethro?” he asked.

“The father-in-law of Moses,” I replied.

My Hasidic informant continued to explain that Rabbi Shimon Bar Yochai is therefore a descendant of Jethro as well as a descendant of Moses. Before the founding of the State of Israel, it was extremely difficult for the Druze to get to the burial place of Jethro, which is located near Tiberius, due to conflicts between them and the Sunni community. For this reason, they, like the Bratslav Hasidim, decided to go to the grave of a descendant and began to come to the crypt site of Rabbi Shimon Bar Yochai in order to give honor to their ancestor, Jethro. “And so it came to pass that Jews and Druze stood side by side at the crypt of Rabbi Shimon Bar Yochai, honoring their respective ancestors,” said my Bratslav Hasid. 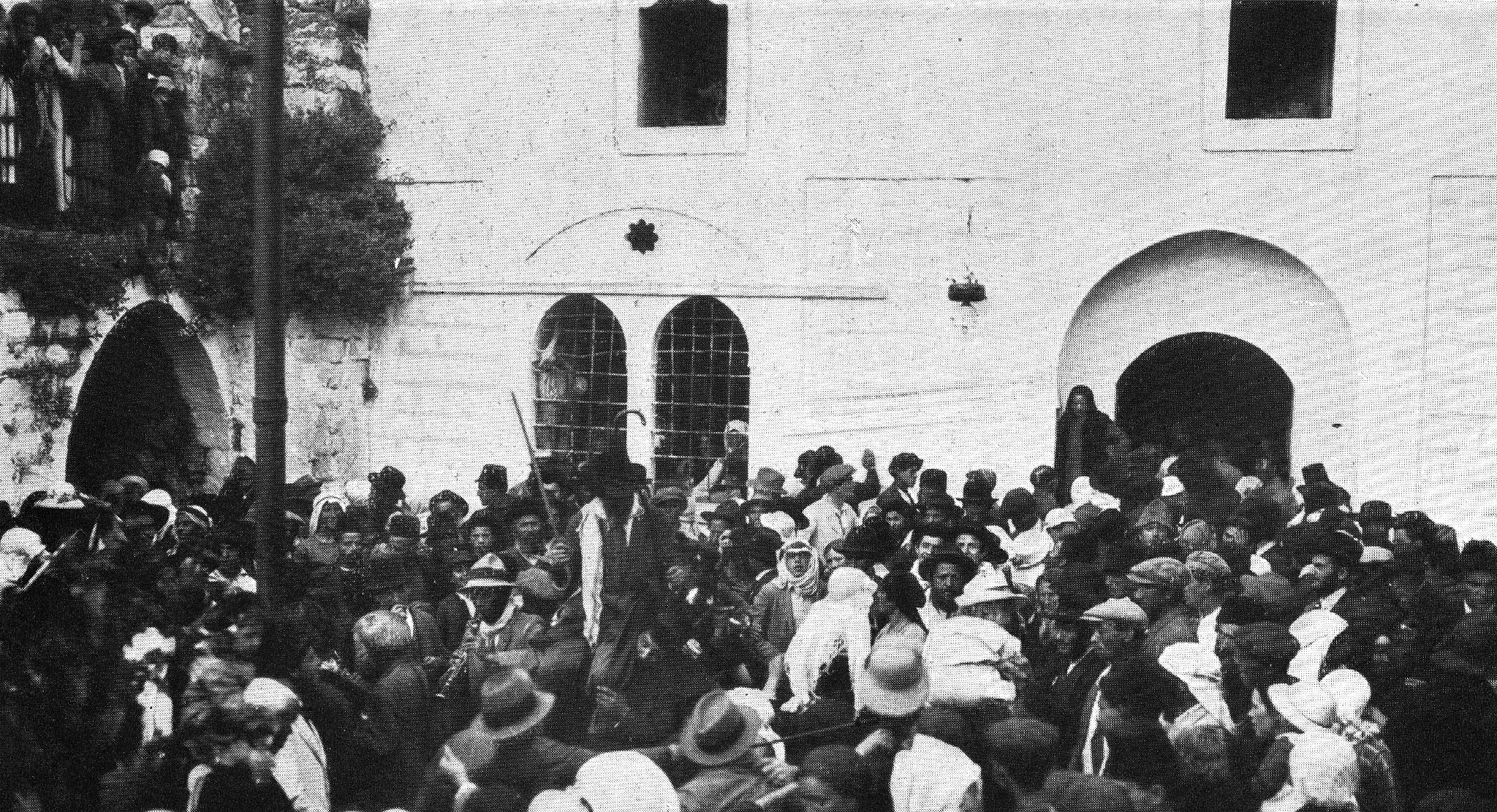 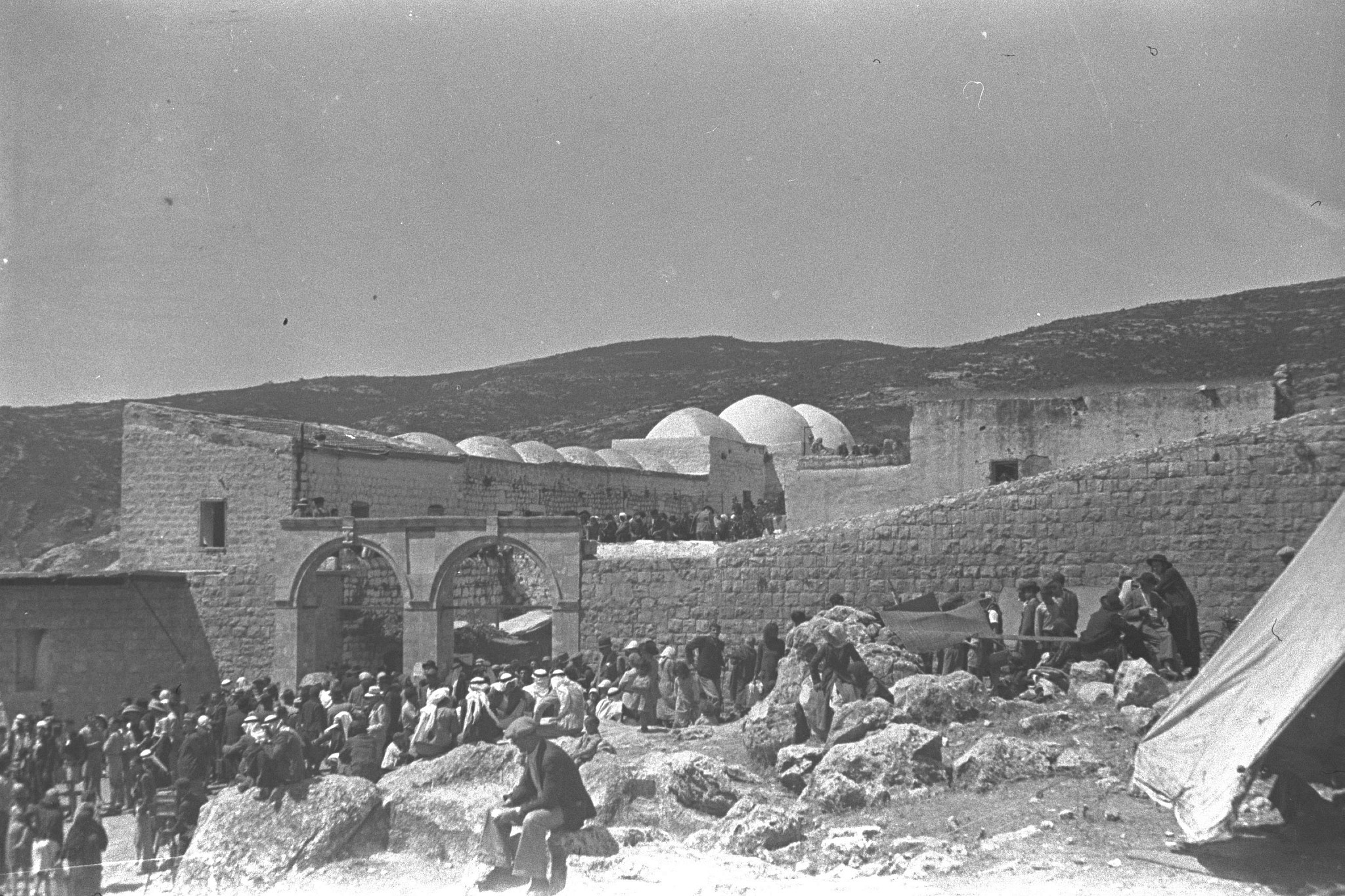 Jews and Arabs gather near the tomb of Rabbi Shimon Bar Yochai on Mount Meron on Lag BaOmer, 1939

European Jews, Yemenite Jews, and Arabs and Druze from the Galilee dance at the grave of Rabbi Shimon Bar Yochai on Lag BaOmer in 1935 (National Library)

I learned from my Hasid that as the years went on, more Braslav Hasidim joined in the dancing with the Druze during the Meron celebration. After Israel’s War of Independence in 1948, the Israeli government paved a road to Jethro’s tomb and granted the Druze full custodianship over the shrine. From that point on, the Druze stopped coming to Meron to celebrate. Miserlou, however, remained part of the Lag Ba’Omer celebration and became a “Bratslav nigun,” acquiring the status of “holiness” and historicity. This adoption was easy to accomplish because the melody is in an Eastern European modality that is very close to the “Jewish ear.” Over time, Bratslav Hasidim introduced this “holy nigun” to other Jews and it became known in a number of Hasidic circles.

Today, Misirlou is often played at traditional Jewish weddings. If one were to inquire about the origins of this melody, the answer would most probably be that it is a “holy Hasidic nigun.” We know, though, that it is a remnant from the time when Jews and Druze stood side by side, paying their respects to their common ancestors, who date back to Biblical times.

The Black Eyed Peas incorporate Misirlou in “Pump It” in 2009 – A holy Bratslav nigun?

This story was first told in Behind the Music: Stories, Anecdotes, Articles & Reflections, by Velvel Pasternak (Tara Publications, 2017), and has been adapted with permission. Velvel Pasternak’s books are available in print and digital formats at JewishMusic.com.