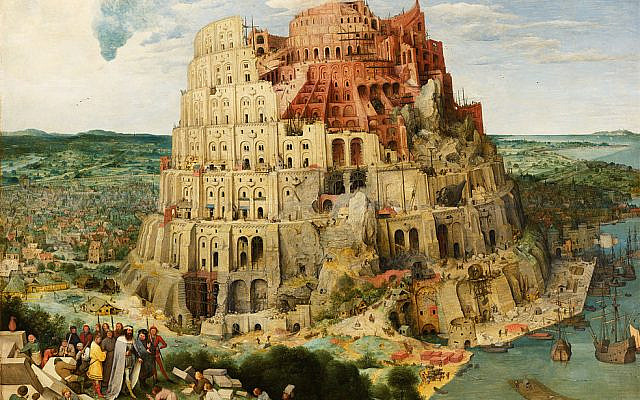 Pieter Bruegel the Elder - The Tower of Babel (Vienna)

When did the Tower of Bavel occur relative to Noach and Avraham?

The colloquial assumption is that the story of Migdal Bavel (Tower of Bavel) (Bereshit 11:1-9) occurred early in the life of Avraham (Avodah Zarah 19a) when Peleg died and Avraham was 48 (Rashi, Bereshit 10:25). However, the text is ambiguous in its chronology of the event, placing it between the conclusion of the list of all of Noach’s descendants and before the delineation of the generations of Shem. The only time period clearly identified by the text having anything to do with the Tower are the events after the Tower, the dispersion, which happened during the life of Peleg (10:25). However, Peleg lived 239 years (11:18-19). Despite this ambiguity, there are a number of contextual hints that suggest a far more rational explanation.

During the listing of the progeny of the sons of Noach, each family’s listing ends with, “…according to their languages… (e.g. 1:10:5,31).  If each subfamily had their own language then how is the subsequent story of the Tower of Bavel described specifically as having a “single language”? Additionally, when delineating the migration of the descendants of Cham (10:10-11), the Torah describes their migration as, “the beginning of his kingdom was …Shinar, and from this land came Ashur…” Shinar was established first and was later followed by the development of the more northern and western kingdoms like Ashur. Yet, the people of the Tower of Bavel are described (11:2) as having “traveled eastward and found a valley in Shinar and dwelt there.” When they came to Shinar it had yet to be established, all the more so the other places to the north and west.

Furthermore, the impetus for the construction of the tower was the people’s fear “…lest we be spread out upon the face of the earth” (11:4). This same terminology ‘spread out’ is again used later in the story (11:8-9) informing us that their fears were manifested. However, this term is also used earlier in the text (9:19) when describing the disembarking from the ark and the future distribution of the brothers. The utility of this posuk appears to establish one pivotal fact. It was “from these they were spread out over the whole land”; at a time when the brothers were all together was their decree of ‘spreading out’ established. If the generation of the Tower of Bavel expresses a fear of being spread out then it implies that the tower must have been built when they were all together, which would have only occurred very early after disembarking from the ark.

However, a different term is used when describing the actual distribution of the people. During the listing of the children of Shem the great-great grandson of Shem, Peleg, is described as being named as such because, “during his time the earth was divided” (10:25). Peleg was born 100 years after the flood and lived approximately 239 years.

Combining all of these features of the text it appears that the Tower of Bavel was a punctuated event. Shortly after disembarking from the ark, when the children of Noach still spoke a single language, living together in one city in the valley of Shinar, was when they resigned to the necessity of the tower. Subsequently, their sin was indicted and their punishment of being ‘spread out’ was decreed (11:6-7). However, it was not until the time of Peleg that they actually became divided and began to spread out across the land and linguistically diverge (11:8). Their unity disintegrated over those hundred years as they became divided resulting in their spreading out across the land and into their myriad languages.